END_OF_DOCUMENT_TOKEN_TO_BE_REPLACED

ONE of the most compelling and engaging presenters at the Precious Metals Summit in London last month was Ronald-Peter Stöferle, a managing partner at Liechtenstein-based asset management company Incrementum, writes Frank Holmes at US Global Investors.

Incrementum, as you may know, is responsible for publishing the annually-updated, widely-read "In Gold We Trust" report.

During his presentation, Stöferle shared the fact that his wife prefers to do her Christmas decoration shopping in January. When he asked her why she did this – Christmas should be the last thing on anyone's mind in January – she explained that everything is half-off. A bargain's a bargain, after all.

This is very smart. Here we are several days before Christmas, and demand for ornaments, lights and other decorations is red-hot, so be prepared to pay premium prices if you're doing your shopping now. But mere hours after the Christmas presents have been unwrapped and Uncle Hank has fallen asleep on the couch with a glass of boozy eggnog, stores will begin slashing prices to get rid of inventory.

Gold bullion and mining stocks are currently in the "January" phase, so to speak, according to Stöferle. The Barron's Gold Mining Index, which goes all the way back to 1938, recently underwent its longest bear market ever, between April 2011 and January 2016. And the World Gold Council reported last month that gold demand fell to an eight-year low in the third quarter. 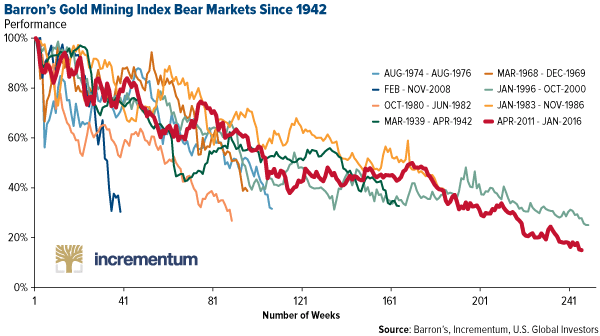 Considering it's faced a number of strong headwinds this year – a phenomenal equities bull run that's drawn investors' attention away from "safe haven" assets, lukewarm inflation and anticipation of additional rate hikes, among others – I would describe its performance in 2017 as highly respectable.

And yet if you listen to the mainstream financial news media, gold is "boring" and "flat". Speaking to CNBC last week, Vertical Research partner Michael Dudas called the gold market "eerily quiet". 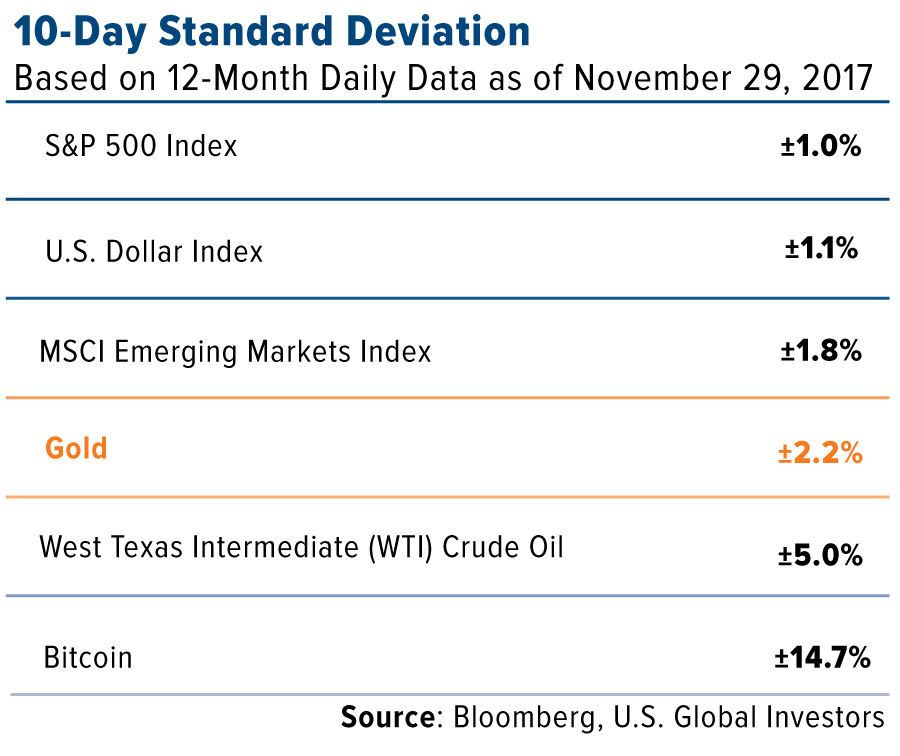 Dudas was specifically describing gold's volatility, but even here the facts tell a slightly different story. In the table to the right, you can see the 10-day standard deviation for a variety of assets, using data from the past 12 months. Gold traded with higher volatility than domestic equities, the US Dollar and global emerging markets. Of those measured, only oil and Bitcoin showed higher volatility.

Based on volatility alone, it's stocks that look pretty "boring" and "quiet" this year, but you're not likely to hear a pundit or analyst describe them that way.

And with good reason.

The S&P 500 hasn't fallen more than 3% from a previous high for more than 388 days now, the longest stretch ever for the index. And for the first time in its 120-year history, the Dow Jones Industrial Average has reached four 1,000-point milestones in a single year – with a whole month left to go.

It's possible that excitement over the Senate's tax bill will be enough to push the Dow above 25,000 sometime before the ball drops in Times Square. The drama involving Flynn's evidence on allegations of Russian collusion with the Trump team, however, could threaten to derail those chances. 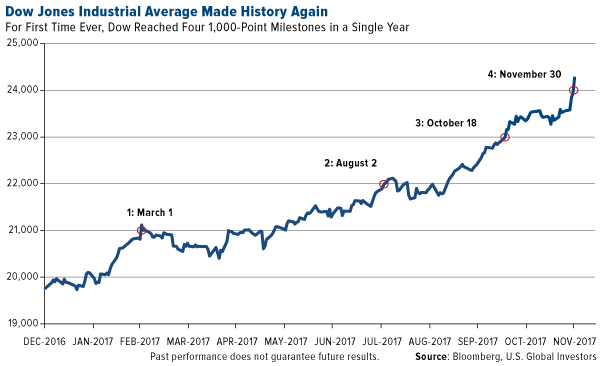 What this means is that, compared to domestic equities, gold is highly undervalued right now. The gold-to-S&P 500 ratio, a time-tested trading indicator, is near 50-year lows. I see this as a strong buy signal, especially now as we await the Federal Reserve's decision to lift rates this month. If you recall, gold broke out strongly following the December rate hikes in 2015 and 2016. 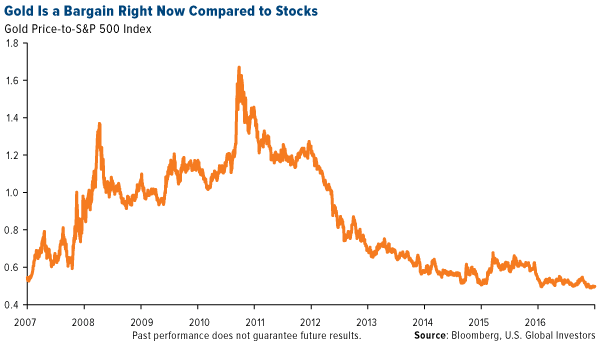 In his December outlook on precious metals, Bloomberg Intelligence commodity strategist Mike McGlone writes that "gold is ripe to escape its cage soon," adding that "prices just don't get as compressed as they did for gold in November, indicating a breakout soon."

So what are the catalysts that could trigger a breakout? Stöferle mentions two: a possible recession and stronger inflation.

"I think the odds are pretty high that a recession might be upon us sooner or later because we're in this rate hike cycle, and as always the central banks are way behind the curve," he said.

What Stöferle is referring to is the strong historical correlation between new US rate hike cycles and recessions. Going back more than 100 years, 15 of the last 18 recessions were directly preceded by monetary tightening. 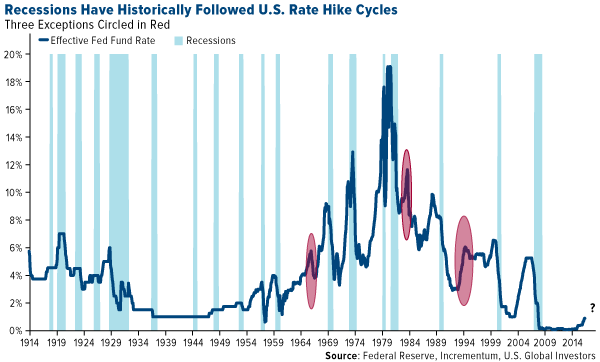 Obviously, there's no guarantee that this particular round will have the same outcome as past cycles, but if you agree with Stöferle, it might be prudent to have as much as 10% of your wealth in gold bullion and gold stocks.

Inflation is a trickier thing to forecast. A lot of people, myself included, had expected the cost of living to show signs of life this year in response to some of President Trump's more protectionist and policies. But nearly 10 months into his term, no major legislation has been passed or signed.

That might be about to change with the highly anticipated tax reform bill, which the Senate passed late Friday night. If the bill reaches Trump's desk, it will be the first time in a generation that the US has amended its tax code.

But will the $1.5 trillion bill, as it's currently written, lead to stronger economic growth and pay for itself, as its most vehement supports insist? My hope is that it will. As I've been saying for a while now, it's time we begin relying more on fiscal policies to drive growth, especially now that the Fed is beginning to tighten policy.

In the spirit of staying balanced, though, there are troubling signs and forecasts that the bill could actually end up being a disappointment. After reviewing the bill, the Joint Committee on Taxation (JCT) estimates that its enactment could lead to a whopping $1.4 trillion increase in the deficit between now and 2027. Even if we factor in economic growth that might come as a result of reforms, the JCT says, we'd still be looking at a $1 trillion shortfall.

Many economists are also skeptical. A recent University of Chicago Booth School of Business survey of economists from Yale, MIT, Princeton, Harvard and other Ivy League schools found that over half did not believe the current tax bill will "substantially" grow GDP. Only 2% thought it would, and more than a third were uncertain. Additionally, nearly 90% believed that if the bill is enacted, the US debt-to-GDP ratio will be "substantially" higher a decade from now.

And then there's the Kansas experiment from five years ago. In May 2012, Governor Sam Brownback signed a sweeping state tax reform bill that in many ways resembles the Senate's current tax bill. It slashed personal and business income taxes, consolidated the state's three tax brackets into two and eliminated a number of credits and exemptions. Hopes were high that the reforms would kickstart economic expansion, help taxpayers and attract new business to the state.

Instead, none of that happened. Following the bill's enactment, Kansas GDP growth remained stagnant, trailing the national growth rate as well as that of neighboring states and even its own rate from years past. This year, the nonprofit financial watchdog group Truth in Accounting gave Kansas a failing financial grade of D, citing its inability to pay its debts or balance its budget. 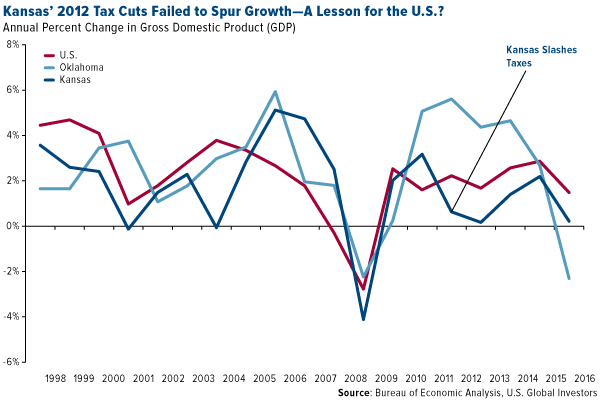 In June of this year, Kansas' Republican-controlled state legislature voted to raise taxes for the first time since reforms were enacted and eventually had to override Governor Brownback's veto. Many of those state legislators who initially supported the Kansas tax cuts are now warning federal lawmakers that similar outcomes could occur on a nationwide scale.

I'm not sharing this to discredit tax reform – in fact, I'm strongly in favor of it. However, I believe it's important to highlight the fact that nothing in life is guaranteed. Hope for the best, prepare for the worst. What steps can you take now in the event the tax reform bill doesn't accomplish what it's designed to do – or worse? This type of uncertainly has historically made gold shine the brightest.

At conferences I've attended and spoken at recently – the Silver & Gold Summit in San Francisco and Mines and Money in London among them – the suggestion has been made by a few big-name investors and money managers that Bitcoin's meteoric rise is to blame for the market's apparent disregard for gold and gold stocks right now.

With Bitcoin up more than 1,050% since the beginning of the year, even after a 21% dip last Wednesday, many market-watchers might simply be too star-struck by the newness of Bitcoin to be bothered by the "barbarous relic".

I happen to think this is a mistake. As much as I believe in the value of Bitcoin, gold and gold stocks still play a crucial role in the modern portfolio.

As I told Kitco News' Daniela Cambone at the Silver & Gold Summit, Bitcoin isn't responsible for dismantling gold. Although both assets are currencies, I don't see them at odds because they serve very different functions. For one, gold is more than money – it's worn as jewelry, widely used in dentistry and can be found in art and even some high-end foods. It's been traded around the world for millennia and, unlike Bitcoin, does not require electricity. Indeed, it conducts electricity, which is why you can find it in your iPhone and GoPro camera's circuitry.

Bitcoin is more than money as well. It's the most influential spokesperson, if you will, of blockchain technology, upon which the currency is built. Speaking with SmallCapPower's Angela Harmantas at the Mines and Money conference in London, I made the comparison that Bitcoin is to email as blockchain is to the internet. In the earliest days of the internet, few people truly understood what it was or could predict the implications of this new technology – but email they understood. It's what woke people up to the idea of using the internet. Bitcoin is doing just that for blockchain.

But blockchain's utility goes far beyond finance. As a decentralized, highly encrypted ledger, it has untold potential to change the way we run our lives, businesses and governments. Among other tasks, the technology can help manage digital rights to intellectual property, bring transparency to supply chains and reliably track the spending of public funds. It can even be used as a tamper-proof voting system, whether you're voting for a new chairman of the board or president of the United States. One day soon, we might all be e-voting from our smartphones and tablets, reassured that our vote cannot be compromised.