END_OF_DOCUMENT_TOKEN_TO_BE_REPLACED

Ask Chinese buyers if they care about Goldman Sachs' gold investment forecasts...
SO GOLDMAN SACHS is once again predicting that gold will fall, setting a new near-term target of $1050, writes Jeff Clark at Casey Research.
Never mind the schizophrenic gene that would be required to follow the constantly fluctuating predictions of all these big banks; it's amazing to me that anyone continues to listen to the investment banks after their abysmal record and long-standing anti-gold stance.
Sure, the too-big-to-fails can move markets – but they say things that are good for them, not us. As an example, while Goldman Sachs was telling clients and the public to sell gold investments in the second quarter, they bought 3.7 million shares of GLD and became the ETF's 7th largest holder.
When I visited China two years ago, guess who no one was talking about? Goldman Sachs.
There was news about the US, of course, but the regular diet of journalistic intake consisted of Chinese activity, not North American. And surprise, surprise, the view from that side of the big blue ball was materially different than what we hear and read here – and in some cases, the opposite.
Not only has the average Chinese housewife, perhaps the most frugal and cautious species of savers in the world, probably never heard of Goldman Sachs and their call for $1000 gold – if she had, she would think: 垃圾! (Rubbish!)
Here's some evidence. Since January 1, Gold ETF holdings have fallen by roughly a quarter (26% according to GFMS). But Chinese housewives aren't refraining from buying and certainly aren’t selling: 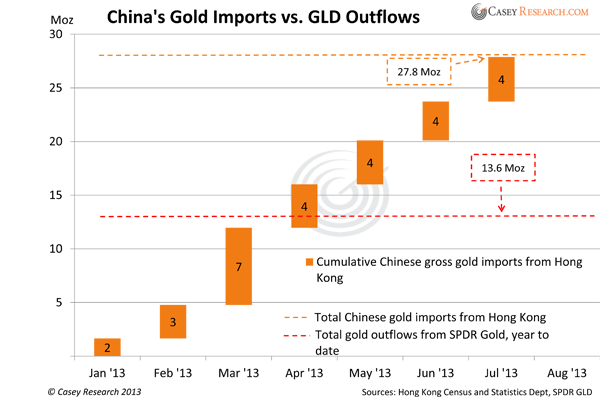 The red dotted line represents the total outflows of GLD through last Tuesday. The gold bars are cumulative monthly imports of gold to China, through Hong Kong. You can see that China has absorbed roughly twice what most North American ETF holders have sold. It's actually more than that, because we only have Hong Kong import data up to the end of July.
But it's even more dramatic than this. If you dig down into the data further, you find that cumulative gold imports through July surpassed the 26.7 million ounces (831 tonnes) that was imported to China for the whole of 2012.
That means rather than being deterred from buying gold when its price was declining this year, the Chinese were snapping up the yellow metal as fast as they could. Further, last year Chinese miners produced 12.9 million ounces (403 tonnes) of gold, all of which stayed in the country.
When you look at physical deliveries from the Shanghai Gold Exchange (SGE) vs. the COMEX and global mine production, you can see a clear trend this year: 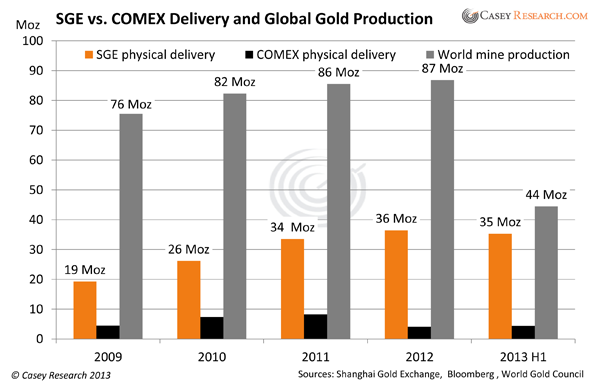 Deliveries at the SGE are significantly greater than those at the COMEX. Delivery ratios on the Comex have consistently been under 10%, in contrast to more than 30% on the SGE. Through June, the SGE has nearly matched all of last year's total.
What's even more astonishing: year-to-date deliveries on the SGE are close to global mine production. In the first six months, delivery reached 35.3 million ounces (1,098 tonnes), just 20% less than what all gold companies mined last year.
It is headlines like these that the Chinese read – not what Goldman Sachs writes.
It's not just the Chinese, of course. India, for now, is still the largest gold market. Despite relentless restrictions from her government, Mrs. Singh bought more gold jewelry and bullion last quarter than any other country. 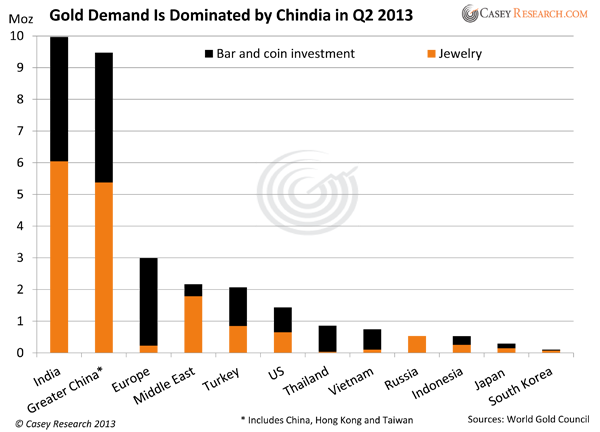 China and India accounted for almost 60% of the global gold jewelry sector last quarter, and roughly half of total bar and coin demand. Further, both countries saw almost 50% more consumer demand in the first half of the year compared to the same period in 2012.
The two countries are again setting records...
It's true that official Indian gold imports dropped in August, to just 0.08 million ounces (2.5 tonnes), a 95% plunge from July’s volume of 1.5 million ounces (47.5 tonnes). It's not yet clear, however, that Indian authorities have managed to subdue gold imports as they have been desperately trying to do; keep in mind the widespread reports of gold smuggling. Meanwhile, the wedding season is just ahead, so demand is likely to bounce back up.
Physical demand also soared in Thailand, Indonesia, and Vietnam last quarter, with increases ranging from 20% to 40% being reported. Add it all up and the Asian/emerging countries comprise the lion's share of consumer demand for gold, about 70%.
It begs the question, are Asians just smarter than Goldman Sachs? And what does this mean to us as investors?
The structure of the gold market is changing. Gold is moving from the so-called "weak hands" – those who saw gold as a "trade" and/or were seeking quick profits – to "strong hands," who see the big picure and are buying for the long term.
Gold is moving west to east. You've heard this before, but the above data irrefutably points to this fact – and the trend shows no signs of letting up.
The East will have an increasingly greater impact on price. As Asian countries take over more and more of the market, Asia's influence on the gold price will only grow.
The gold bull market is not over, regardless of what Goldman Sachs says. When I read their comments on the precious metals market, I sometimes wonder if they really understand it. But then again, do any of their analysts even own any gold?
Mrs. Chang, I'm with you.