END_OF_DOCUMENT_TOKEN_TO_BE_REPLACED

Can rate cuts reverse the slowdown...?

BOTH the ECB and the Fed have recently cut interest rates to stimulate slowing growth, hoping to escape possible recession, writes Arkadiusz Sieron at Sunshine Profits.

Will they succeed in the face of trade wars, geopolitical tensions and slowing economic indicators?

After all, they don't have the most reliable record when it comes to preventing busts. Let's get into the central flaw of central banking and what it implies for gold.

First, the recovery from the Great Recession has been the slowest post-war recovery, despite the massive monetary (and fiscal) stimulus, as the chart below of US real GDP growth (% change from year ago) from Q1 1948 to Q2 2019 shows. 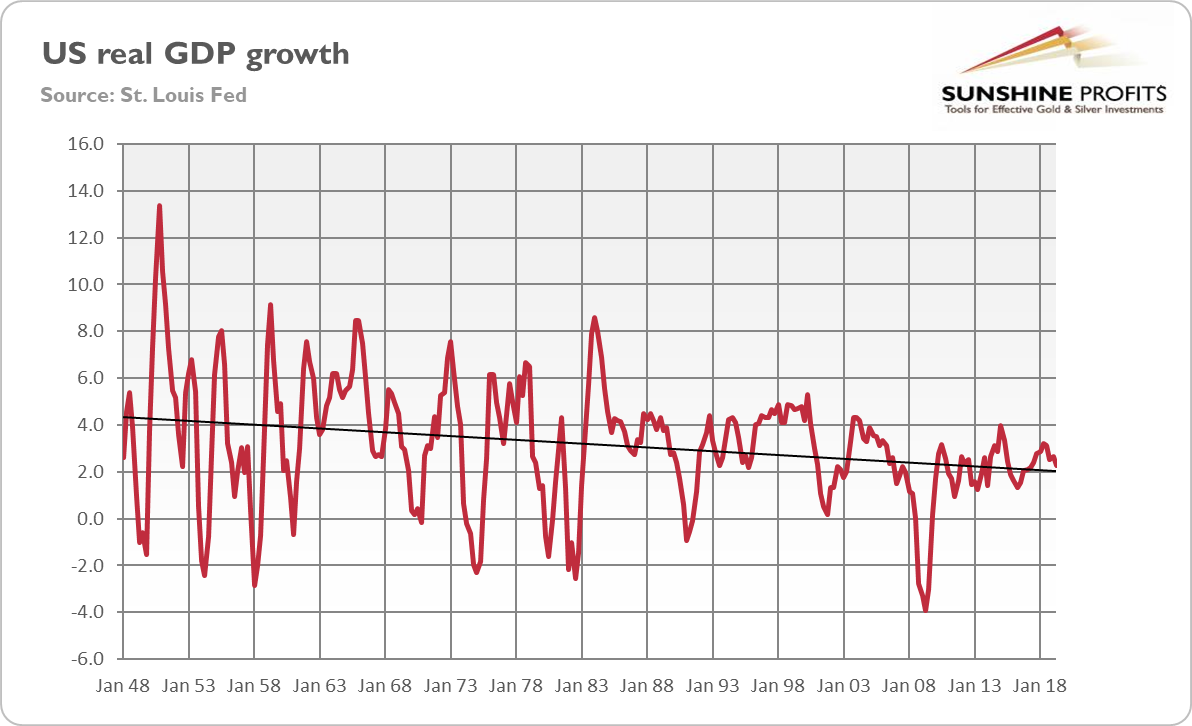 Neither ZIRP, NIRP nor quantitative easing provided any significant boost to the economy. But each tightening cycle preceded a recession.

So it would be foolish to believe that this time the central banks' actions would stimulate the economy and prevent the next slump. Gold bulls can sleep peacefully.

The fatal flaw in the central banks' thinking lies in the belief that interest rates offer the central lever by which they can exert their influence over the economy. On the surface, it seems to make sense. Lower interest rates imply lower borrowing costs, so people will borrow more to finance additional investments projects and stronger consumption. With higher investment and consumption spending, the GDP growth will be faster.

However, it is very simplified reasoning. In reality, lower interest rates do not have to stimulate economy. Why? First of all, the central bankers can lead a horse to water, but they can't make him drink. We mean here that easy monetary policy can create favorable conditions to expand business and consumer spending, but the final decision rests with banks, entrepreneurs and households.

When they try to deleverage and repair their balance sheets, they are not interested in taking more debt, no matter the costs. Same when they are afraid of trade wars or the next recession. They will simply not invest, and several basis points will not change it.

Other issues are the limited importance of the manufacturing sector (lower rates do not importantly affect capital spending) and the fact that the US consumer debt is mainly in the form of fixed-rate mortgages that are, by definition, not sensitive to interest rate cuts.

Moreover, monetary easing may actually be counterproductive, hampering economic growth. Why? Although it might be surprising or even unpleasant for Keynesian economists, there are not only borrowers but also savers in the economy. And guess what: ultralow interest rates reduce the income generated by savings. So people may save even more (technically speaking, the income effect may counterweight the price effect).

While this is bad news for people saving money for retirement, it's actually good news for the yellow metal. When bank accounts do not provide people with decent interest rates, some of them may switch fund into gold. In the environment of ultralow interest rates, all assets – not only gold – become practically the non-interest bearing assets.

Second, the cut in interest rates may negatively affect expectations in two ways. When interest rates are at ultralow levels, people expect that they will rise soon. And they can interpret the monetary policy easing as a sign that central banks are desperate because something ugly is unfolding in the economy. So they will not increase their spending.

Third, the monetary easing may spur excessive risk-taking, as people seek yield in the environment of ultralow interest rates. It supports risky assets, so it's negative for the safe haven such as gold – until, of course, the bubble bursts.

Last but not least, ultralow interest rates, in particular the negative yields, hit the banks' profitability. Call it a strange idea, but we insist that you cannot have a healthy economy without healthy banks, so weakening banks is not a wise course of action.

The key takeaway is that the major central banks eased their monetary policies in an attempt to stimulate growth and shield the global economy from recession. However, the history of central banking teaches us that they will fail. You cannot solve the supply-side problems with demand-side stimuli. The central banks will, thus, not kill the bull market in gold. Actually, they can strengthen it.

This is because the ultraeasy monetary policy is not only impotent but it entails serious counterproductive effects. So, yes, in a sense the monetary policy is a very powerful – but a perverted tool. This is great news for the yellow metal – the central banks' panic reactions can only aggravate economic situation, making gold to shine more brightly.