END_OF_DOCUMENT_TOKEN_TO_BE_REPLACED

GOLD fell yesterday. The gold price could break all the way down to US$1000. But we don't expect it. Gold is not in a bubble, says Daily Reckoning founder Bill Bonner.

How do we know what gold 'should' buy?

We don't, really. But gold is a natural thing. It is pulled from the earth by people, using the technology and resources available to them. As their productivity in other areas goes up, so does – generally – their ability to extract gold from the ground.

If GDP goes up 10%... the quantity of gold usually goes up about the same amount. If the economy goes into a decline, so does the gold mining industry... reducing the rate of growth of the gold supply.

This was also the observation of Roy Jastram, who wrote The Golden Constant in 1977. Jastram looked at 500 years of British history. He found that prices – in terms of gold – were remarkably stable.

And here we see that prices for stocks, too, were also stable...as long as gold – rather than an economist – stood behind the currency. 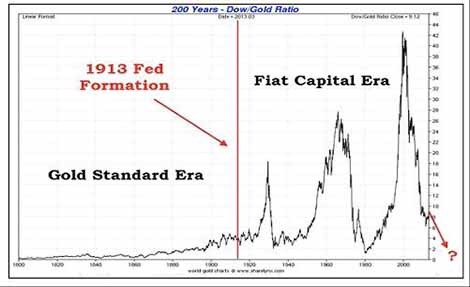 You can see for yourself from the above chart of the Dow/gold ratio going back to 1800. Prices for stocks went haywire in gold terms only after Congress created the Federal Reserve System in 1913.

But wait. Hasn't most of the profit for gold buyers already been made? Tekoa Da Silva from BullMarketThinking.com explains:

Da Silva does not say so, but the Dow/gold ratio could come down in another way. Gold does not have to go up in price; stocks could fall. If the Dow were to slip to 8,000, for example, this would be equivalent to a 5-to-1 ratio.

When the stock market cracked in 2000...and gold continued to rise... we thought the two were headed for a historic conjunction. Perhaps at 2-to-1. Perhaps at 1-to-1. Where would the two meet?

Gold is still real money. It is still brought forth only with much effort and investment. And the Dow stocks still represent a certain group of publicly listed, US-domiciled companies from which you can expect a certain earnings stream. There is no reason to think that the basic relationship between the Dow stocks and gold has been altered in any fundamental or everlasting way.

For practically the entire 19th century...many years of the 20th century...and as recently as the 1980s, the ratio of the Dow to gold was 1 to 5 or less. Investors paid 5 ounces of gold to buy the Dow and its earnings.

Will the Dow once again trade for 5 ounces of gold or less? Almost certainly. And it will probably happen before this historic drop in the Dow/gold ratio has reached its final bottom.