END_OF_DOCUMENT_TOKEN_TO_BE_REPLACED

There, said it! Just beware the cheerleaders...
SO HERE we are, with the gold-mining sector leading the recovery out of the March crash during still-deflationary times, writes Gary Tanashian in his Notes from the Rabbit Hole.
Inflation? It is not yet anywhere to be found, and that probably has a lot of inflation-centric would-be gold boosters on the sidelines. Someday, when those cheerleaders are in full cheer with inflation signals rising, it will in fact be time for caution instead.
Meanwhile, for years we have stuck to the real fundamental backdrop that would produce a real bull market in the gold stock sector (ref. the 2001 and Q4 2008 time frames).
Our handy 'Macrocosm' generally shows the most important considerations as the larger planets and the least important as the smaller ones.

As the gold stock bull market starts to gain attention beyond we gold lunatics and enters the mainstream, I thought I would update each component of the Macrocosm.
Gold rises vs. Stocks
Let's use the S&P 500 as our marker and view gold's relative standing in-day using a live futures chart.
As the stock market had been sucking in the FOMOs into February for what we had projected as a pre-correction blow off, gold marked time until the deflationary forces rammed home by the COVID-19 epidemic took over and the gold price rose vs. most other assets, as it would in a deflationary environment. 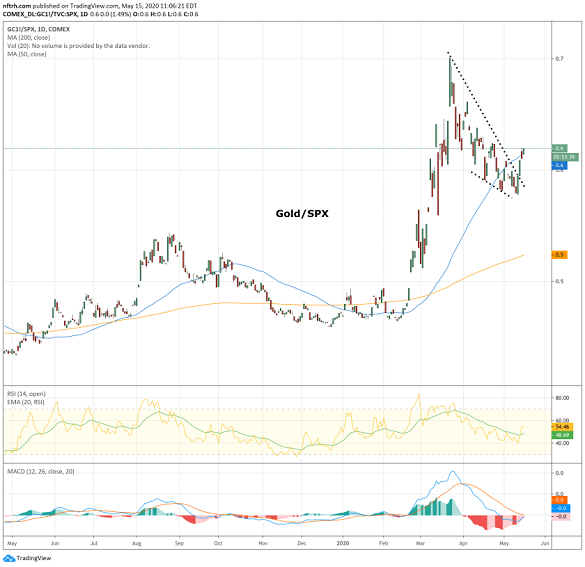 The Gold/SPX ratio is breaking the routine consolidation that has been in play during the stock market's relief bounce. This most important macro indicator is full on bullish for the gold miners as it increases the interest of non-goldbugs in the sector.
Economic Contraction
The note at the upper left side of the Macrocosm graphic above discounts pestilence as a reason to be bullish on gold or gold stocks. Well, not in the case of COVID-19, which immediately impacted economies the world over and as such, is the primary economic fundamental of our time.

Economies are contracting and we do not need the cavalcade of data and graphics to illustrate. Amid GDP deceleration, job loss and many other data sets, let's simply note the crash in Retail Sales for April and call it case closed, the economy is in dire straights and not likely to 'V' recover even if the course of the pandemic follows the best case projections.
Confidence Declines
From TradingEconomic.com:

The notion that any temporary bump in sentiment is boosted by fiscal and monetary policy response to the crisis is only another positive for gold and by extension, gold stocks

The 'Confidence' indicator in all of its facets, is fully positive for the counter-cyclical gold stock sector.
Yield Curve Stops Flattening or Steepens
Here is the in-day snapshot (source: CNBC):

The yield curve inverted with much media fanfare in the summer of 2019 but as we've noted all along, it is the steepener that brings the changes, not the inversion. What we have so far in this important economic stress and/or inflation gauge is the first part nailed down "yield curve stops flattening" and very likely, a new steepener.
It's yet another macro indicator fully aligned with a gold and gold stock bull.
Gold Rises vs. Commodities and Global Currencies
These planets should be larger, but work with me here. It's the graphic I used to make general points, not to scale to exacting standards. Okay now, are words necessary about this monthly chart of Gold/CRB? 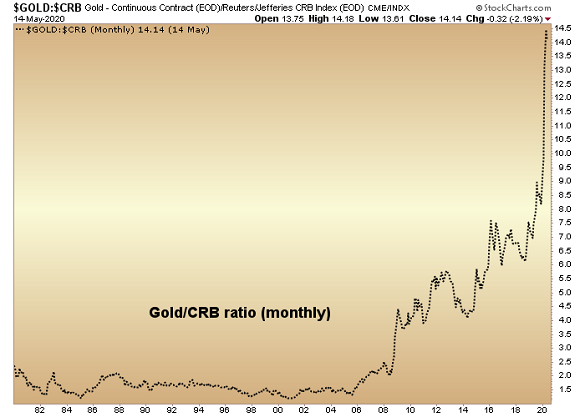 No? Well, let's just note that the backdrop is deflationary and with economic contraction impairing cyclical commodities vs. counter-cyclical gold.
Let's also note that energy and materials are greatly impaired in relation to gold. Hence, the gold mining product is blowing away gold mining cost inputs in price. A gold miner would have to be a complete disaster not to take fundamental advantage of this dynamic (don't put it past some miners, plenty of which are just poor operators). But generally, this is a massively positive sector fundamental underpinning.
As for gold vs. currencies, the weekly chart is showing the steady uptrend vs. the whole lot of basket cases that have value only because governments say they have value.
As governments go into full frontal money printing, bond (credit/debt) manipulating bailout mode these firm trends should continue. As with gold vs. stocks, gold/currencies will help drive new money into the gold sector.
Inflation Expectations, Cyclical Inflation and ha ha ha, the China/India "Love Trade"
This is where the sector promoters get you. If the more casual investors are not vigilant they will get gotten again some day, probably well out on the horizon, when the current positive backdrop for gold stocks morphs into the next inflation problem.
When the inflation touts are again imploring you to protect yourself from inflation...'buy commodities, buy resources, buy oil, buy hogs, buy gold stocks!' (ref. the 2003-2008 and 2010-2011 periods) you will remember that gold mining fundamentals will probably be impaired if a new cyclical inflation comes about (if it ever arrives in any reasonable time frame, as stagflation in my opinion is a more likely probability).
What I mean by cyclical inflation is inflationary economic growth. By stagflation, I mean rising costs while peoples' ability to earn does not keep up due to the impaired economy. On the positive side, the 2003-2008 cyclical inflationary period was accompanied by a 300% rise in the HUI Gold Bugs index, so we are talking about awareness, not over reaction to future inflation.
There will probably be a long period where the touts provide a public service to we gold bugs positioned early and for the right reasons. But risk increases during such times, as the liquidations of inflationary phases that led up to 2008 and 2012 clearly proved.
TIPs ratios are in the tank. Gold is blowing away commodities, including copper and the Silver/Gold ratio is only on a nice bounce. 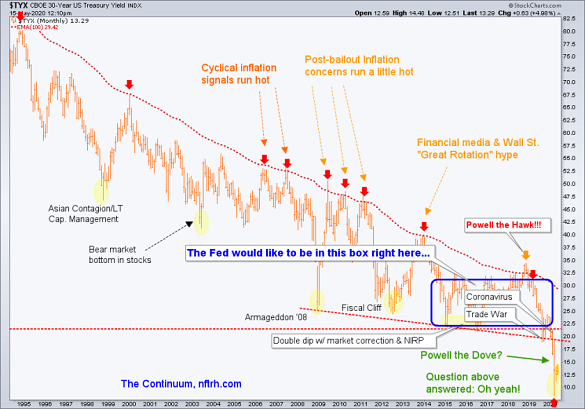 This means that there is a bounce in play in an indicator that could lead inflation expectations (silver having more cyclical inflation sensitive characteristics than gold). But it is only a bounce right now.
Finally, we'll conclude with the Continuum (30 year Treasury yield), one of several indicators we use to gauge inflation, among other things. It resides in the Deflationary dumps. Powell hawkish during inflation, Powell dovish during deflation.
It's so simple that it seems it cannot be so simple. It is. As noted for subscribers in the NFTRH Trade Log Notes as the market tanked and gold stocks reversed their gains when Powell spoke last Wednesday...

"I go out to mow lawn. Powell speaks. I come back in and the market has tanked (it had already been weakening as noted in this post. (and this one from yesterday). Nothing he said should be adverse to gold stocks, and yet they got hit too. If anything, his words about a more pained economic recovery and the need for additional policy response are favorable to the fundamentals. But as always, on any given day or week the market will do what it will do."

Bottom line? The NFTRH Macrocosm of proper gold/gold stock fundamentals and indicators is completely in line and while it is sure to be volatile, the bull market is legit because it is being driven by the correct forces, much like what came into play in late 2008/early 2009 and before that during the 2001 time frame.
When you have the fundamentals at your back, the rest is noise.