END_OF_DOCUMENT_TOKEN_TO_BE_REPLACED

AS WE TURN the calendar over, there are probably two dominant questions on the minds of most precious-metals investors, writes Jeff Clark, senior precious metals analyst at Casey Research.

Will gold and silver have a better year than the last two? And will gold stocks finally break out of their funk?

2012 was an interesting year for our favorite metal. On one hand, gold was up only single-digit percentages for the second consecutive year: 8.3%, after rising just 9.1% in 2011. It was also outperformed by the S&P 500 Index, though this was the first time since 2004 and only the third since 1999. On the other hand, the price has now risen 12 consecutive years, overshadowing most other bull markets in modern history.

Here's a snapshot of our industry for 2012, along with how it compares to other asset classes. 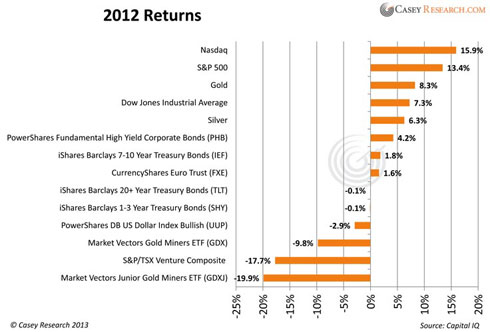 Perhaps a more constructive way to view things is from a longer-term perspective. How have these same sectors performed since the 2008 financial crisis? 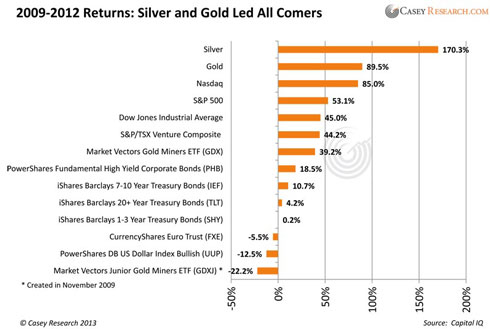 Over the past four years, gold and silver have provided the best returns among major asset classes. Gold producers, meanwhile, have collectively underperformed the metal, while the juniors as a whole have lost money.

Some claim that gold is in a bubble, because it has advanced so much. "It's already gone up a lot," they say. The reality is, however, that this bull market is small compared to most others in modern history. 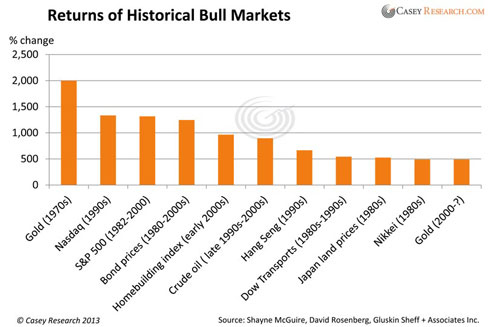 Over the past 40+ years, our bull market would be among the smallest of the major bull markets listed, in terms of percent gains. It's about a quarter of what the 1970s bull market returned. A good number of them also lasted longer than ours. Based strictly on percentages, I'd bet that ours isn't over.

Further, history shows that bull markets tend to end in a climactic blow-off top. For example, gold rose 120% in 1979. Our best year was 32% in 2007. Hardly meteoric, and contrary to how the typical bull market culminates.

And this is all without getting into all the fundamental reasons to continue buying gold.

I think that's the wrong question. Since gold is the best and longest-lasting way to store wealth ever adopted in history, and not technically an investment, the more accurate query is: will gold continue to protect my purchasing power?

Worded that way, we begin to see gold its proper light: real money. If we're holding gold as money, the question then becomes: how much is our purchasing power in Dollars or other alternatives to gold likely to decrease this year? And in future years?

If there's one thing we're certain of, it's that the current path of debt accumulation, deficit spending, and money printing will continue to devalue Dollars and other unbacked currencies – and probably at an accelerating speed in the not-too-distant future.

I've read some analysts claim that these things are already factored into the gold price. That's debatable, but even if they're right, what's not priced in are the delayed and indirectconsequences from all those actions...

The problem is that overindebtedness, overspending, and printing currency is not all candy, lollipops, and romantic horseback rides on the beach. It's not free of consequences. We have yet to experience the full ramifications of how these actions are undermining our currency. And that won't be a fun or pain-free process.

Buying gold? See how BullionVault can dramatically cut your costs...