END_OF_DOCUMENT_TOKEN_TO_BE_REPLACED

Latest round of perma-bull promotion...
AH, the IMAGINATION of gold perma-bulls, writes Gary Tanashian in his Notes from the Rabbit Hole.
The promoter in question – he of the "drop dead gorgeous bull wedge" in GDX right before one of the worst declines of the 2011-2016 bear market – is at it again, touting inflation as the end for the US stock market and the beginning for gold and, get this, gold stocks.
As I said, irrepressible...and chock full of exclamation points and talk of rockets and launches in case the bugs that he is addressing like children might waver in their attention spans.
I've kept a wary eye on the guy ever since an NFTRH subscriber left in the 2012 time frame while I was not offering reasons to be fundamentally bullish, informing me that Sir Exclaims Alot was.
Anyway, I think the precious metals complex has a shot at setting up for an oversold rally based on sentiment alone, but the macro fundamentals are NOT in line, no matter how many !!!! the promoters use.

"Even the few token hikes that are planned could begin a trip to Hades for stock market investors, while spiking inflation launches a gold miners rocket to the moon."

Gold miners rocket to the moon, you tout?
Sounds an awful lot like the 2015 tout (way before the eventual bottom a half a year later).
But let's assume for a moment that inflation will prove good for gold in this instance as it sometimes does (indeed, we noted reasons gold could benefit in a subscriber update on Friday).
What is the fuel that is going to rocket gold miners to the moon? Oil? Oh wait, oil/energy is a major cost driver to mining operations, which are also dragged by other commodities and materials.
You see...

"Oil is making a beeline towards my $100 round number target, but I expect to see a price of $200 before the Fed gets serious about rate hikes...and by then the inflation fire will be burning out of control."

His target of $200 is ahead for this mining cost driver. But you are expected to swallow lazy analysis blathering about inflation and do what wrong-way gold bugs always do, and buy the miners with both friggin' hands.
Trouble yourself not that there is an industry built around gold stock promotion, shut your brain off and ba ba bahhhh BUY!!!!! 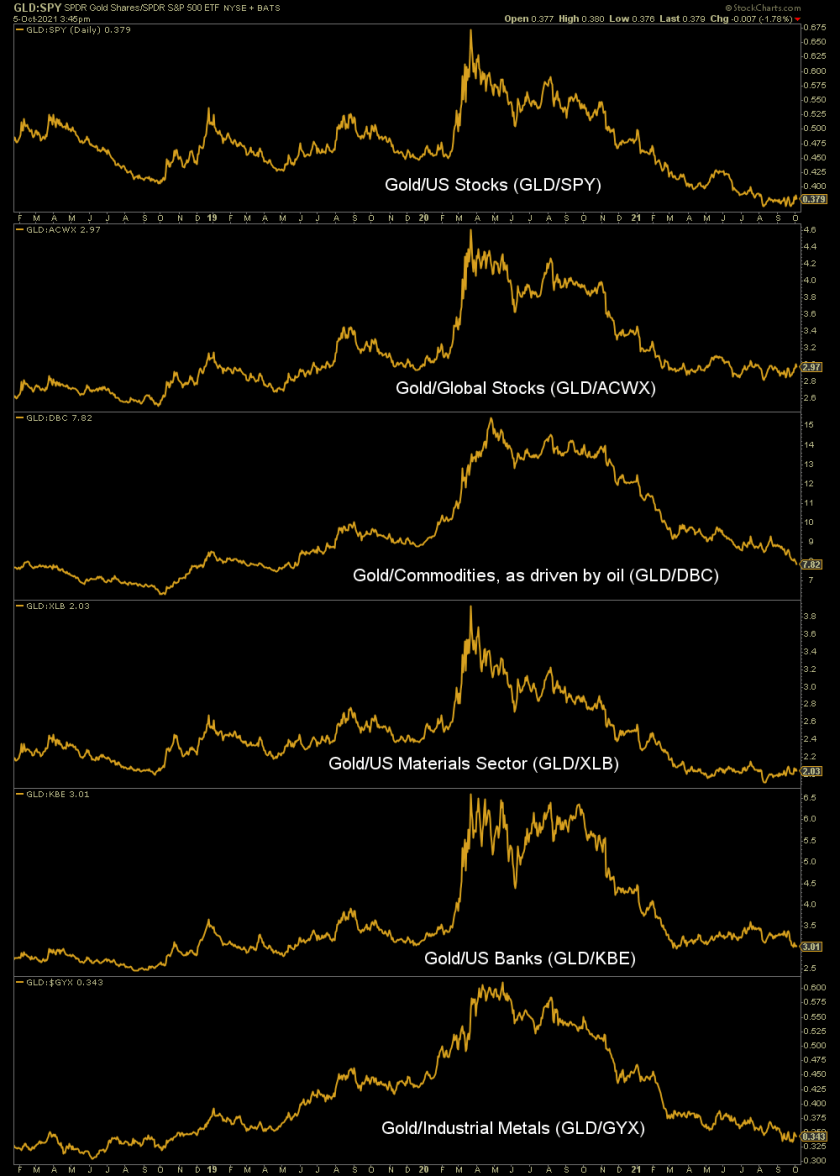 I have tried to put some gold-bug deprogramming out there over the years but invariably while a few people gravitate to the view, most remain part of the herd.
What prompted this post? Well, this morning a subscriber noted in an email about something else "Thanks for your commentary and wish I got away from the bugs and over to your commentary years ago."
And then right after that, during my morning reading, I came upon Mr.Gold Miner Rocket Launch. Voila, food for a post.
Anyway, above is the chart of reality as opposed to perma-pimp promotion. When the macro starts to make tangible moves to constructive we'll note it (NFTRH first, and here later). But check out Gold/Commodities (as driven by major gold mining cost driver oil).
The macro does not turn until it turns. Unless it's turning in the imagination of perma-bulls.