END_OF_DOCUMENT_TOKEN_TO_BE_REPLACED

The YELLOW METAL has outperformed arguably the greatest living investor, Warren Buffett, over the last 20 years, writes Frank Holmes at US Global Investors.

For the 20-year period, gold has returned more than 485%, beating Warren's Berkshire Hathaway, which was up 426%. Not only that, but gold royalty and streaming company Franco-Nevada, has beaten Buffett too.

Granted, gold saw an unusually strong rally in the 2000s, while equities were knocked down hard during the dotcom bubble and financial crisis.

But that's precisely my point. Those who had the prudence to diversify their portfolios during this period – and not just in gold but also bonds, real estate and more – were in much better shape than some other investors.

Speaking of Franco-Nevada, the company's royalty model is one I believe strongly in and have written about often.

Pierre Lassonde, chair and co-founder of Franco-Nevada, has helped the company serve a very special role in the mining industry, one that many investors fail to realize the significance of. For example, as evidenced in the chart above, many gold royalty companies have outperformed the yellow metal itself.

Franco has a robust business model and its ability to generate revenue in times when the gold (or other previous metal) price is both rising and falling is what makes it attractive.

I look forward to Pierre joining our upcoming webcast on opportunities in metals and mining on October 31, in collaboration with ETF Trends.

Most investors are aware that Buffet is an infamous gold bear. But what some might not know is that he was once a silver bull for a time.

The Midwest, where Buffett is from, has an historical affinity to silver over gold. In 1997 and 1998, Buffet and Berkshire amassed a record silver stockpile of 129.7 million ounces, which actually caused a shortage of the metal and drove up lease rates. In Berkshire's 1998 letter to shareholders, Buffet wrote that in the prior year the company's silver position "produced a pre-tax gain of $97.4 million for us."

Buffet bought silver when it was under $5 an ounce and sold around the $13 mark in 2006. Turns out Buffet was early to sell, as silver hit its peak of $50 just a few years later in 2011. Why make a big bet on silver and shy away from gold? Especially since gold has been the second best performing asset class, behind REITs, for the 20-year period. Perhaps Buffett will rethink his strategy. 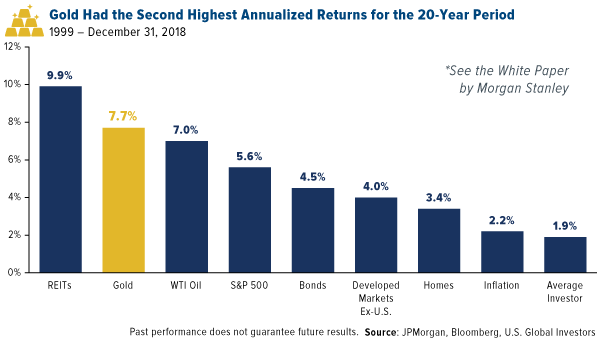 Not only has the price of gold been up for five of the past six months – it's down so far in September – but August fund flows into bullion-backed ETFs were the highest in more than a year. North American gold ETFs rose by nearly 78 tonnes (2.7 million ounces) last month, totaling 122.3 tonnes worldwide, according to the World Gold Council (WGC).

In India, gold ETFs attracted the most money in more than six years "as investors poured in money seeking safe havens amid record high domestic prices and a slowdown in the economy," Bloomberg reports this week. August net inflows rose to 1.45 billion rupees ($20 million), the most since December 2012.

Retail investors aren't the only ones in accumulating mode. Central banks, led by those in China and Russia, continue to load up on the yellow metal to diversify away from the US Dollar. Russia has quadrupled its gold reserves in the past decade, according to Bloomberg, and in the past year the reserves' value has jumped 42% to $109.5 billion.

"There is a massive substitution of US Dollar assets by gold – a strategy which has earned billions of Dollars for the Bank of Russia just within several months," comments Vladimir Miklashevsky, a strategist at Danske Bank.

Meanwhile, China has added some 100 tonnes of gold to its reserves since it resumed purchases in December as a way to hedge against the trade war with the US

I've made this point before, but it's worth repeating: China's official gold holdings represent only 2.8% of its foreign reserves as of this month. This is one of the lowest percentages among world banks. Gold held by the US, by comparison, represents more than three quarters of its total foreign reserves. What this means is that the People's Bank of China (PBOC) still has mountains of gold to buy before its finances are adequately diversified. I can see China's activity lending support for the price of gold for a long time to come.

Speaking of support, perceived risks of a global recession and the likelihood that the Federal Reserve will lower rates to 0% could be enough to push gold up to a record $2000 an ounce, according to Citigroup.

"We expect spot gold prices to trade stronger for longer, possibly breaching $2000 an ounce and posting new cyclical highs at some point in the next year or two," Citi analyst Aakash Doshi wrote in a note dated September 10, and reported by Bloomberg.

I agree with Citi's projection. When governments offer you a negative rate of return, that automatically makes gold much more appealing. What's more, I think this easing cycle has just begun.

On a final note, Cornerstone Macro sent out an eye-opening note last week that details what might happen to regulatory costs on the private sector should one of the Democratic contenders manage to win the White House in 2020.

Spoiler alert: They would likely rise.

According to Cornerstone analysts, the creation of new regulatory costs are significantly down under Trump, who made deregulation a major campaign promise. Since Trump's inauguration in January 2017, new government rules have added $20 billion on average per year. That might sound like a lot, but it's 82% less than the $109 billion on average that were created every year during Barack Obama's presidency.

There are some serious implications here, Cornerstone points out:

"If Democrats win the White House next year, the regulatory burden is likely to be at least as high as it was under Obama even if a relatively more moderate Democrat wins the nomination and Democrats don't have the votes in the Senate to pass new legislation," Cornerstone says. "Under the right conditions, the regulatory costs could be considerably higher than they were under Obama."

Where are the conservative "blue dog" Democrats when you need them? As I heard at a dinner recently in New York at the Cornerstone conference, the radical Democrats appear to be pushing European-style socialism as a new rule or regulation.

As we state in all of our prospectuses here at US Global Investors, government policy is a precursor to change. Cornerstone says that there's growing support among Democratic presidential contenders for a more aggressive approach to antitrust enforcement and criminal prosecutions of companies and top corporate leaders. Some have called for revitalized organized labor.

I'm not bringing any of this up to be partisan. We're more concerned about government policy than politics. But I think investors should be aware of the potential for higher costs to US businesses in the coming months.

For these reasons I like to remind investors to pay attention not only to gold, but also to tax-free, short-term municipal bonds, as I believe they remain the best place to park your cash.