END_OF_DOCUMENT_TOKEN_TO_BE_REPLACED

FOR YEARS, the Federal Reserve has herded investors away from cash and bonds. It wants to keep investors bullish on stocks, hoping higher stock prices will create a wealth effect, writes Dan Amoss for the Daily Reckoning.

Along with stories of new highs in the Dow, newspapers are running stories on the Fed's role in pushing up prices. The Fed's support for the stock market, freshly baked in early 2010, is now a stale theme. By the time a theme is constantly in the front page of the newspaper, it's already played out. Newspapers reflect investors' existing investment stance; front-page stories don't feature investments that are ignored or cheap.

If you look beyond the sound bites and groupthink, you'll find few investors that really believe in this market. Many fully invested stockholders plan to sell on the first sign the run is over.

Meanwhile, the buying pressure needed to push the market even higher from here must come from retail investors who've sworn off stocks after two crashes since the year 2000. It's possible, but not likely. And even if possible, "greater fools" rushing into the market at the top would hardly lead to a wealth effect.

Investors' psychology of noncommitment — "I don't really believe in the sustainability of this bull market, but I'll hold stocks because there is no alternative" — sets the market up for a steady drift higher, punctuated by sharp crashes. If the Fed wants to sustain the artificial stimulus gains in the market, it must respond to each crash with promises of more easy money.

History shows the Fed excels at creating bubbles, yet is completely inept at controlling conditions when bubbles pop. At the end of this mission to create a wealth effect, stocks may be a little higher, but the economy won't be healthy, and faith in the Dollar's integrity will be shattered.

Investors have yet to flock to gold and silver as safe havens from currency chaos. But with central banks stuck in a permanent cycle of easing, investors will eventually think through the implications and position themselves accordingly.

George Topping, a gold mining analyst from Stifel Nicolaus, published a chart showing the US adjusted monetary base and the gold price. In the first two shaded areas of the chart, the Fed's QE programs inflated the monetary base, and gold rose in lock step: 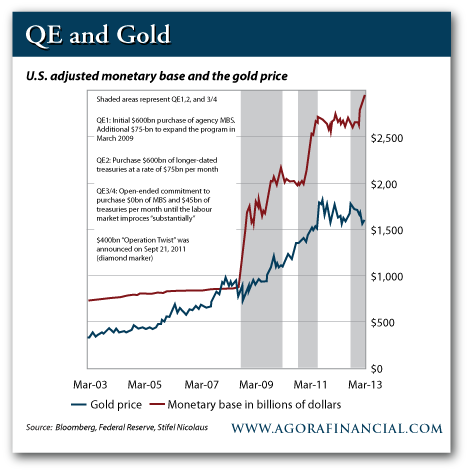 The third shaded area is the latest round of QE. The monetary base is rising as fast as ever, yet gold prices have fallen. This phenomenon is unlikely to last. The monetary base will keep growing, which will continue increasing the value of gold versus paper. It's only a matter of time before the market recognizes that there will be no exit from QE and there will be no shrinkage of the monetary base. When that happens, gold (and silver) will break out of their long consolidations.

In its note, Stifel mentions that savers in Argentina, where confidence in the currency is collapsing, are rushing to buy up physical supplies of gold: "Argentine citizens are reported to have increased gold purchases in order to protect their savings (versus current inflation of 26%). The only gold trader in Argentina, Banco de la Ciudad de Buenos Aires, is apparently in talks to buy gold directly from miners as scrap supplies diminish."

Buying directly from miners? If that is the case, it shows how quickly physical gold can disappear from the open market once a bankrupt government uses its central bank to finance its budget. Here in the USA, based on the status quo policies and political math, we are heading in that direction.

Get the safest Allocated Gold at the lowest price possible on BullionVault...