END_OF_DOCUMENT_TOKEN_TO_BE_REPLACED

SINCE gold's bull run began a decade ago, many people have asked me whether the metal was in a bubble, despite the fact that there were many drivers in place for gold, writes Frank Holmes, CEO and chief investment officer at US Global Investors.

Here's another comparison that answers this classic question.

Research firm Commerzbank's strategists recently compared the price of gold starting in 2002 to the price of Brent crude oil starting in 1998 and the NASDAQ Composite from 1990. Immediately following each index's record highs, oil and tech stocks declined sharply. Within nine months, tech stocks had halved in price, while it took only three months for oil to lose half its price, says Commerzbank. You can see the dramatic rise and fall of each index on the chart below.

In contrast to oil and tech, gold has been level-headed over the past decade. Nearly 20 months after its peak, gold has fallen only about 25 percent, and its path remains in line with Brent and the NASDAQ after their bubbles burst. 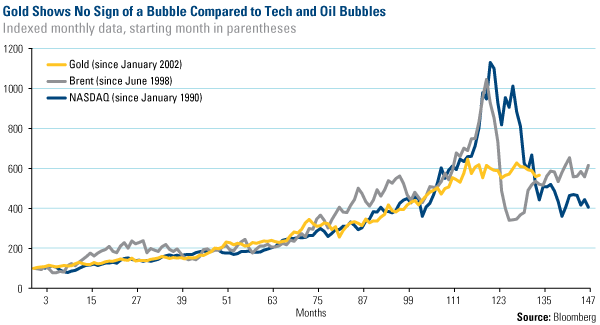 In Commerzbank's opinion, a comparison between the current situation in gold and the former bubbles is superfluous at best.