END_OF_DOCUMENT_TOKEN_TO_BE_REPLACED

A lesson in contrarian investing...

IT TAKES real mettle to be a successful contrarian, and it's precisely because so many investors are so nervous about our market today that I see it as a buyer's market, writes Louis James, chief metals & mining strategist at Doug Casey's Casey Research.

Let me digress for a crucial, relevant sliver of history. It was literally a deal done in the dead of night: 4:00 a.m., March 30, 1867. The US Civil War was a recent and very raw wound; the South destroyed and desolate, the North broke and bleeding, urgent needs of the people beyond counting. We'll never know the full truth of how the purchase of Alaska came together, but I suspect the true motives of those involved would weave a story worthy of a season of Deadwood: corruption, expropriation, murder...I'm sure it was all there.

Why else would the war-torn USA agree to spend desperately needed funds on a frozen wasteland you had to cross potentially hostile British territory to reach, and was full of hostile natives bristling with weapons once you got there? All the more reason not to pay for a territory so remote and useless that the Russians were willing to sell it for two cents an acre.

Even the British, who were busy settling British Columbia (now the Canadian province between the US states of Alaska and Washington), didn't want Alaska and turned down a Russian offer on the territory. An initiative by then US Secretary of State William H. Seward would eventually seal the deal. This is why the purchase of Alaska became known as Seward's Folly, a name that stuck for many years.

Something interesting happened during the formal transfer of Alaska. A blacksmith named Ahllund witnessed the handover, recounting that the Russian flag got stuck on the pole as it was being lowered. A soldier was ordered to climb the pole and retrieve the flag, but couldn't. A second tried and failed. The blacksmith offered no details on why the flag got stuck or why the pole was so hard to climb. My romantic heart has to wonder if the sharp-eyed eagle of Russia, the imperial symbol of the monarchy, knew its masters were giving away an enormous wealth in minerals for too small a price. Be that as it may, a third soldier succeeded where his comrades failed, and that was the end of it.

It took 31 years, in fact, until gold was discovered in the Klondike, setting off the famous race to prospect, sometimes called the Klondike, Yukon, or Alaska gold rush. The discovery is close to the Yukon/Alaska border, and the deposits, of course, pay no heed to the boundaries drawn on maps by men. Plenty of gold was discovered – and more than 100 years later is still being discovered – on both sides of that imaginary line.

My point, however, is not the independence of geology and politics, but the vision of whoever was really pulling Seward's strings and hence truly responsible for the purchase of Alaska. "Vision" may be the wrong word. I doubt that the interests behind the deal envisioned the gold rush to come decades hence and were placing their bets early. What I'm sure they did see were the Russians being squeezed by their creditors (the Rothschilds), and an opportunity to buy a huge tract of land even cheaper than the three cents per acre Jefferson had paid for the Louisiana Purchase in 1803. In both cases, the sellers had to sell and potential buyers were few – a classic contrarian setup.

People who buy low – especially contrarians who nail the bottom of a market – are frequently called fools at the time, and for very good apparent reason: all the forces that explain the sell-off are well known. Arguments against the contrarian's folly are numerous and backed by recent experience and facts that most find too compelling to ignore. This is what makes the "Wall of Worry" phase of a market cycle so...worrisome.

I see this in the precious-metals market today, with rising mining costs, taxes, royalties, regulatory hurdles, and more, erecting not just walls, but fortresses and citadels of worry. All the reasons why Doug Casey has called mining a "crappy, choo-choo-train industry" keep getting worse. The fact that recent experience for most speculations on mining stocks has been painful, even with high metals prices, makes it even harder to buy low and charge the fortresses of worry.

Imagine trying to convince one of our hunting/gathering ancestors, whose only experience with fire was terror and devastation, that fire would become his or her best friend. That might actually be easier than trying to convince a person who's just lost a fortune on commodities that buying commodities is a great idea. Depending on the timing, it would be true precisely because commodities had just wiped many people out, and the demand for commodities never goes away. It wouldn't matter, though; the prejudice based on painful recent experience is entrenched, the battlements of worry too fiercely defended.

The current market for precious-metals stocks is not quite so bad, in terms of devastation, but it's almost as good, in terms of investor disgust and clear opportunity. That stems from investors placing too much emphasis on their recent experience, rather than on understanding the fundamentals driving the market. 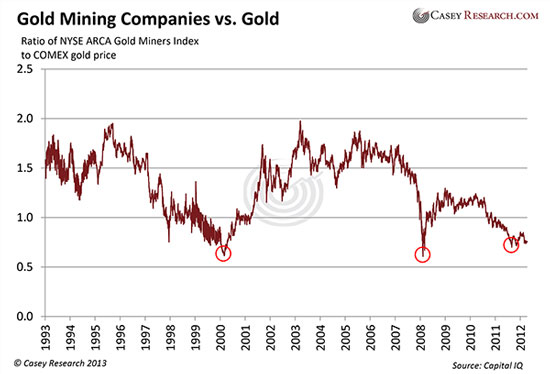 But just because there's an opportunity to buy low, that doesn't make indiscriminate buying a good idea. Focusing on the best of the best also sets the stage for maximizing gains going forward.

In that context, it's particularly important to remember that after the crash of 2008 it took the market half of 2009 to regain momentum. Yet, the best of the best mining stocks rebounded even before the end of 2008.

All of which is to say that today we are in a classic Wall of Worry trough. It's not an intercycle bottom, but in my view it could be an excellent intracycle opportunity for those with the guts and vision to be contrarians – or at least those who recognize a chance to buy on the cheap when they see one.

I see the current market as one of great opportunity because I look at more than the joy or pain of recent experience. You could say that I'm a fundamentalist when it comes to markets. Let me highlight one key, recent development that really underscores the solidity of the trend we're betting on: Japan's incoming government is promising to run the money-printing presses at full speed and print its way into prosperity.

This alone is inflationary; but of course, Japan is not alone. The EU, in spite of the austerity talk, has also pretty much said it will do whatever it takes to prop things up, and the US has thrown caution to the winds with its open-ended QE4-ever. The skids on the slippery slope are fully greased, the slide has begun, and there is no one and nothing on the global scene with the strength and the will needed to stop it.

The crash will come. Maybe not next month, and – if recent economic figures from the US government are to be believed – maybe not this year. But come it will.

As that becomes increasingly apparent, the resulting stampede into gold and gold stocks should exceed even Doug's "trying to pass the contents of the Hoover Dam through a garden hose" expectations.

Everything I see in the global economy today points that direction. Nothing I see convinces me that the governments of the world can succeed at borrowing and spending their way into prosperity – at most, they can delay judgment day a little longer. At most.

So yes, I'm that sure of what's ahead. Only the timing is uncertain. People may call it Casey's Folly now, but I don't think we'll have to wait 30 years – or even three years – for our own "Klondike Moment," when we'll be cashing in on some extraordinary profits on our own investment prospects.

I'll leave it to bigger fools or knaves to declare when the next gold rush will commence. What I can say is that I don't want to be short when it happens.

Thinking of buying gold or silver? See how BullionVault makes it safer, cheaper and easier...