END_OF_DOCUMENT_TOKEN_TO_BE_REPLACED

See gold charted vs. a non-Dollar basket of foreign currency...
GOLD has performed very well under the circumstances of declining inflation and a surging US Dollar index, writes Jordan Roy-Byrne at The Daily Gold.
Since 2014 the US$ index is up nearly 18% while gold is up 3%. Since gold's November low the US$ index is up over 10%. Had we known that at the time, we'd have thought gold would be headed for $1000 and not the $1300 it recently hit. At present, the US$ index appears ripe for a correction or major pause in its uptrend. Given that gold is priced in US$ and that gold has shown strength in real terms, sustained US$ weakness could be a major boon for gold and precious metals as a whole.
Before we get to the US$, I'd like to provide a comparison of gold and gold charted against foreign currencies. To create the foreign currency index we simply took US$ data and inverted it.
Thus, we are charting gold against the currency basket that comprises the US$ index. 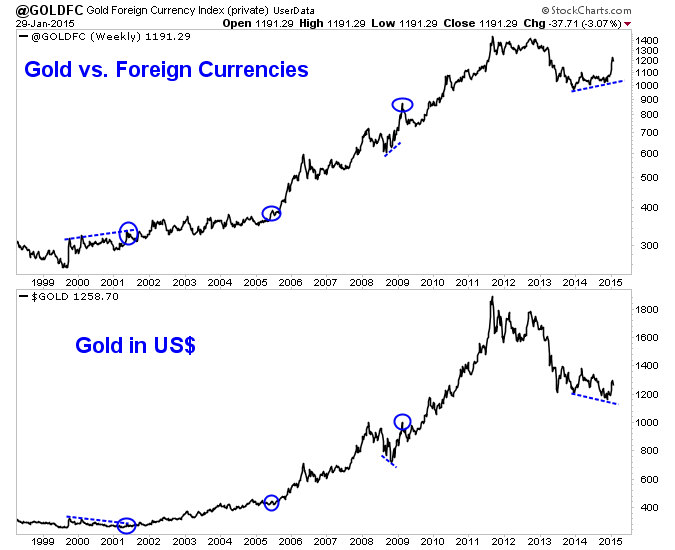 Over the past 15 years strength in gold relative to foreign currencies has often preceded gold strength in US$'s. Gold priced against foreign currencies bottomed in December 2013 and reached a 21-month high last week.
Let's take a look at the US$ index itself. We plot the index and its distance from its 10, 40 and 80-week exponential moving averages. A market's distance from various moving averages can signal overbought and oversold conditions. 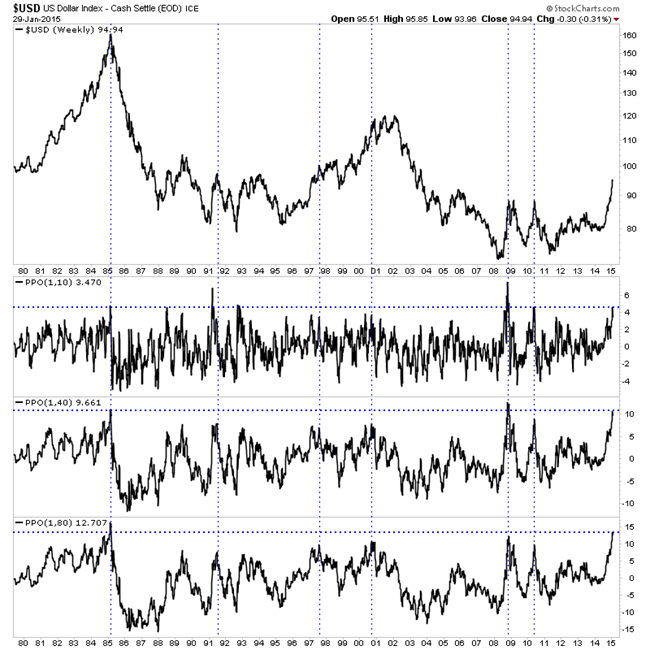 We highlight the points at which the US$ index has been most overbought. Considering the three oscillators as a whole, the US$ index is arguably at its third most overbought point since the US$ floated in 1971. The other times were at its peak in early 1985 and during the 2008 financial crisis.
Meanwhile, sentiment on the US$ has reached a major extreme. Public opinion charted below (from sentimentrader.com) recently hit 91% bulls. That is the highest in 15 years. We should also note that the daily sentiment index for the US$ index hit 98% bulls a few weeks ago. That is the highest reading since May 2010. The US$ peaked a month later. 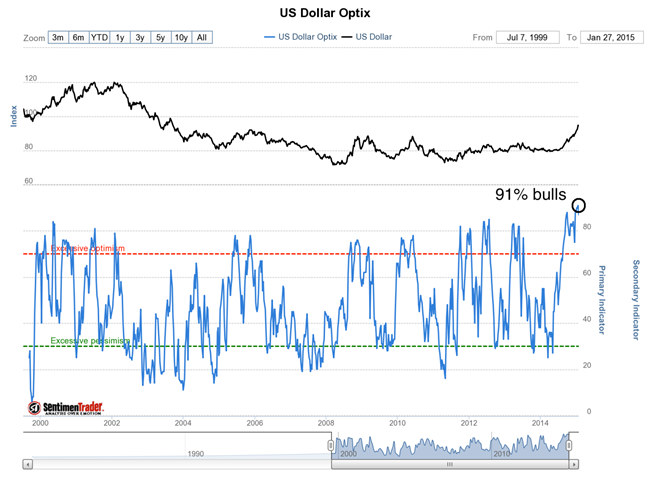 Gold has performed very well amid tremendous US$ strength and could get a further boost if and when the US$ weakens. The US$ index is extremely overbought and sentiment is extremely bullish. At the least it figures to correct or consolidate for a while.
That could be gold's chance to begin its next leg higher and force the bears to capitulate. While recent correlations have been atypical, I find it hard to believe gold doesn't perform well if the US$ corrects.