END_OF_DOCUMENT_TOKEN_TO_BE_REPLACED

Time to sell gold? Leveraged traders sure think so...

ANOTHER DAY, another beating for gold and silver investors, writes Greg Canavan at The Daily Reckoning Australia.

After trading lower all day Friday, Asian futures markets today opened in a panic, with leveraged holders no doubt getting margin calls over the weekend. The result? Stump up more cash or sell. Clearly, selling is the preferred option.

It seems like a lot of punters are trying to pick the bottom. They're buying in the expectation of a bounce...and when that doesn't eventuate, more selling takes place.

In gold, we're now closing in on the low from April at around US$1320. Will it hold or head lower still? We have no idea. And we certainly wouldn't be utilising the futures market to make a bet on it.

But we do know that for every seller there is a buyer, whether it's in the futures market or the physical gold market. Some are happy that prices are again back at levels from a few years ago. They're the 'strong hands' and they're taking in what the 'weak hands' throw into the market.

All this reminds us of 1999. Back then you had financial market euphoria in the midst of a new internet age. The tech bubble was in full swing. Stocks – especially anything tech related – were a sure thing. They went up day after day on nothing more than hope and expectation.

Meanwhile, gold was in the doldrums...a barbarous relic well past its time. In the modern age of pets.com and new paradigms, gold was an anachronism. But as hindsight was to show, 1999 represented the nadir in gold's long bear market.

Today, we are in a similar state of market euphoria. Everyone is jumping on the central bank bandwagon. They're making bets that can't lose. Downside risk has central bank protection (the Bernanke put) and the upside is unlimited.

What could possible go wrong?

Against this backdrop, institutional investors and speculators dump gold futures to go long S&P futures. And it's a great trade at the moment. It 'makes sense'. As in 1999, who sees the sense in owning gold when faith in central banks (or new technology) seems all-pervasive? Right now, it seems like an unnecessary hedge – so sell, Sell, SELL!

That may be the mindset of the speculator, but it's a different story for the physical gold advocate. According to reports, physical gold demand is as strong as ever in India and China. And last months' price plunge led to huge demand from the 'retail' investor all around the world.

So while the 'institutional imperative' (Warren Buffett's reference to the short term pressure that institutions face to 'do something') forces the hand of big money, the small investor takes a longer view. They see a world distorted by cheap money. They see a highly fragile financial system. You don't get a stock market melt-up when the underlying financial foundations are sound. You get this type of price action when there is something very, very wrong with the system and the price signals and incentives it gives off.

On the face of it, it is entirely rational that markets are soaring on the back of unprecedented central bank largesse. And it is rational that speculators see less need for a hedge in such circumstances, and so they sell gold. But we are pretty confident that hindsight will prove this trade to be a very big mistake. And the biggest mistake is that most players think they can get out before everyone else.

The other similarity between now and 1999 is a little more obscure. It relates to the extremely low 'gold forward offered rate' (GOFO) that was prevalent in 1999 and...now. The GOFO is the interest rate one must pay to borrow US Dollars using gold as collateral. Alternatively, it is the interest rate charged by holders of US Dollars to obtain gold short term. The lower the rate, the greater the demand for gold, or the greater amount of Dollars bidding for gold.

Last week the 3-month GOFO dropped to the lowest level since 1999 (when the three month rate actually went into backwardation...a highly unusual situation where the owner of gold gets paid to swap their gold for US Dollars).

So once again, despite (or because of) falling prices, the gold interest rate structure is telling you demand for physical gold remains very strong.

But there is one important difference worth considering. In 1999 market interest rates were much more 'normal' than they are now. A series of recent articles in the Financial Times' Alphaville blog argue that a super low GOFO simply reflects super low rates everywhere. It doesn't signal strong demand for physical gold, but just an attempt by risk adverse institutional money to protect capital in a deflationary environment.

It's a complex argument, and a bit beyond our simple powers of comprehension. Being a simpleton, we tend to think the right interpretation is the simplest one. And the simplest interpretation of gold is that it will protect your wealth in times of severe monetary distortion. Full stop. End of story.

That gold doesn't seem to be doing so now is a product of markets sending wildly false price signals – just as the S&P500 and the Dow Jones are sending a false signal of a US economy in good health. The falling gold price is sending a false signal about the underlying health of the financial system. And tragically, when the majority of investors succumb to this false signal, it will likely turn around warn of the opposite development.

We have no idea when this will happen, but to give your imagination a kick along, we include this comparison of gold's recent performance with the 1970s' bull market (sourced from Jesse's Café American). From 1975-1976, the gold price fell 50%. The yellow line in the chart below represents the latter part of that correction. As you can see, a steep price fall was followed by a rebound, then another fall to new lows. 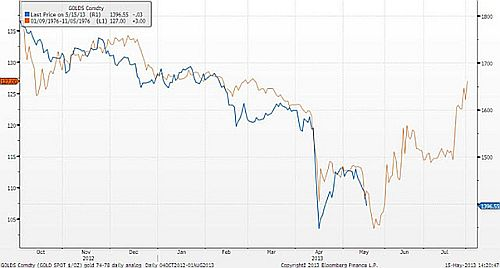 This last dramatic fall obviously cleared out the last of the weak hands, and set gold up for an explosive move higher in the years to come.

So far, the 2013 move in gold is following the 1976 script. If that continues, expect new lows very soon, followed by a sharp reversal.

Don't bet on it though. History rarely repeats exactly. We offer the comparison only to show that we've been here before. And also to make the comment that if you want to ride a bull market through to the end, you must first endure years of pain...of being 'wrong' and feeling like a fool.

The market is not so much a test of intellectual strength as emotional strength. If you don't have conviction and belief in your position, the market will take you out the back and beat you senseless.

And we're guessing many gold investors are this week wondering when the beatings will stop.