END_OF_DOCUMENT_TOKEN_TO_BE_REPLACED

Too big is too bad in funds...

HAVING finally gotten around to watching John Krasinski's A Quiet Place, we can side with the consensus: it's a modern day classic, writes Tim Price on his ThePriceOfEverything blog.

It clocks in at just 90 minutes, but there's not a single idle second. The whole film is pared down to the bone. And it's a ruthlessly efficient exercise in sustained suspense. The film is an elevator pitch made flesh: if you want to stay alive, don't make a sound. Simply brilliant.

One of the most iconic print ads of all time is Helmut Krone's Think Small for the VW Beetle. 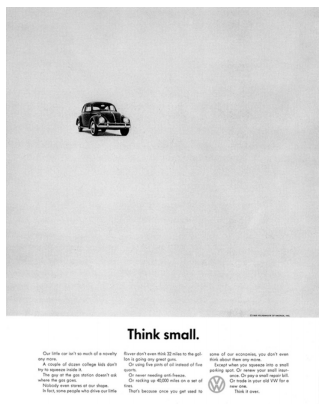 The art designer, shunting the car into an ocean of white space, managed to overcome any resistance from the client complaining that the image of the product (or the logo) was too small. Copywriter Julian Koenig managed to deliver wry, ironic, self-deprecating copy.

Think small redefined the art of advertising, transforming bluster and hyperbole into nuance and simplicity. (It even managed to survive the almost insuperable challenge of marketing a car built and designed by Nazis.)

The phrase 'Less is more' is often credited to the minimalist architect Ludwig Mies van der Rohe. But the sentiment is pretty much universal. The French writer and aviator Antoine de Saint Exupéry made the same point when he wrote that:

Nature doesn't squander her resources, so why should we?

One of the earliest to warn about the dangers of State gigantism in Europe was Leopold Kohr, an Austrian Jew who narrowly escaped from Hitler's Germany just before the outbreak of the Second World War. Kohr was born in Oberndorf in central Austria, a village of just 2,000 souls. Its smallness made an impact on the young Kohr, who graduated in 1928 and went on to study at the LSE alongside fellow Austrian Friedrich von Hayek.

In September 1941 Kohr began writing his masterwork, The Breakdown of Nations. He argued that Europe, far from expanding, should be 'cantonised' back into the sort of small, autonomous regions that had existed in the past and still thrived in Switzerland, with a commitment to private property rights and local democracy.

"We have ridiculed the many little states," wrote Kohr sadly. "Now we are terrorised by their few successors."

Kohr showed that there were natural limits to the growth of societies, and the complexity that becomes a feature of larger systems: Social problems have the unfortunate tendency to grow at a geometric ratio with the growth of an organism of which they are a part, while the ability of man to grow with them, if it can be extended at all, grows only at an arithmetic ratio.

Another sceptic of the bulging State was the American physicist Professor Albert Bartlett, who died in 2013. He warned that the greatest failure of the human race was our inability to comprehend the power of the exponential function: how growth at a modest-looking but fixed percentage rate over time can lead to unimaginably huge escalation. He also warned that for any organism that reaches maturity, further growth equates to either obesity or cancer.

As in society, so in business. Fund management is an industry that rewards scale. In terms of staffing, capital or intellectual property, there is very little difference between managing $100 million and, say, $1 billion. Or rather, there's no difference for the managing firm. But there's potentially a huge difference for the paying client. As asset managers morph into asset gatherers, the likelihood of delivering superior returns shrinks.

This has been acknowledged by no less an industry leader than Warren Buffett himself, who has observed that size is an anchor to fund management performance.

US portfolio manager Ben Carlson crunched the numbers on Buffett's own firm, Berkshire Hathaway, by decade, and they make for interesting reading.

As Berkshire got bigger, its outperformance, versus the market, got smaller.

The world of asset gathering has got weirder in that the largest players no longer even attempt to outperform the market, merely to try and match its returns more efficiently.

We think discriminating investors who care about their capital are willing to pay for performance. But they should also recognise that superior returns, even if delivered, cannot scale indefinitely.

For this reason we tend only to invest in companies without a big Wall Street research following. And with managers who make an explicit commitment to close their funds before they get too unwieldy. That is to say, we only invest in boutique managers, just as we only intend to be boutique managers ourselves, to concentrate on performance.

Doyle Dane Bernbach managed to trap lightning in a bottle, and repeat the trick. In 1962 they created a campaign for the car rental firm, Avis. Avis was struggling to keep up with the No. 1 brand in the sector, Hertz. The agency's response was to change the rules of engagement. They went with "Avis is only No. 2 in rent a cars. So we try harder."