END_OF_DOCUMENT_TOKEN_TO_BE_REPLACED

THIS YEAR I've been talking a bit about various interpretations of the Great Depression, writes Nathan Lewis at New World Economics.

There has been a great urge, it seems, to find some kind of monetary problem to explain the onset of the Great Depression, preceding the British devaluation of 1931 and the various difficulties that followed.

I've never found any of these arguments very convincing. It's worth noting that the mainstream interpretation, during that time and until 1960 or so, was that there was not any particular monetary problem. It was commonly said that "there was nothing that central banks could do," without devaluing. I agree with this.

So, my position is really not much different than what had been mainstream opinion. It is still a major branch of mainstream opinion – for example, I would say that Barry Eichengreen's 1996 book Golden Fetters: the Gold Standard and the Great Depression basically makes the argument, typical among Keynesians, that there was no great problem with the gold standard arrangement of the time, but that problems arising from other sources (summarized as a "decline in aggregate demand") should have been addressed with a monetary response.

Peter Temin categorized the two basic stances common in the academic world in Did Monetary Forces Cause the Great Deression? (1975). One was basically Keynesian, and asserted that there was no great contributing factor from monetary causes. The other was basically Monetarist, and blamed everything on monetary causes.

One of these is not like the others – namely No.5, which although favored by Gustav Cassel in particular has not been very common.

We will assume for now, as others have, that gold's value was stable during that time, serving as the Monetary Polaris as it had done for centuries previous.

The other four notions all have a fundamental contradiction with the basic theory and operation of a gold standard system. As a fixed-value system, the value of the currency obviously could not vary meaningfully from its gold parity (without ceasing to be a gold standard system), which eliminates any "inflation" or "deflation" from monetary causes.

Currencies had identifiably stable values, in foreign exchange markets for example, without significant use of capital controls, or other such evidence that "official" and "real" currency values were divergent. This divergence was a chronic condition during the Bretton Woods period, so we know what that looks like. It wasn't happening during the 1925-1931 period.

To maintain a fixed-value system without capital controls, the monetary base must essentially become an automatic residual. If the currency's value is too high, the base is increased; if it is too low, the base is reduced.

The opposite would happen if the currency's value was low vs. the parity. If the market value of the Dollar was 1/21.00oz instead of 1/20.67, then the Federal Reserve would be the cheapest seller of gold, and everyone who wanted to buy gold would buy it from the Federal Reserve, taking money out of circulation by giving it to the central bank.

The situation was complicated by simultaneous activity in discounting, direct lending, and open-market operations in securities (government bonds). For many central banks, it was complicated further by foreign exchange transactions. But, the basic process was still the same – an increase in the monetary base when a currency's value was high, and a decrease when it was low. I talk about all these topics in much more detail in my book, Gold: the Monetary Polaris.

We've dealt with the first three propositions already. So, now on to "blame France".

As regards France, we can see that the value of the Franc was stable vs. its gold parity, with no particular problems. The monetary base, by implication, was simply what it needed to be to maintain that value parity, because if it wasn't – if the value of the Franc was deviating from the parity – then the monetary base would have changed to bring it back into line, via gold conversion if necessary.

Let's say the Bank of France converted some of its foreign exchange holdings to bullion with the Bank of England. In the first instance, the Bank of England's monetary base would shrink; but that would lead to a rise in the Pound's value, thus leading to gold inflows. The Bank of England would end up where it began, with a little bit of fuss and bother but no real change.

It makes sense – the change in the Bank of France's reserve policies doesn't really have any effect on the overall demand for British Pounds. If there was an undersupply of British Pounds for any reason, it would be remedied by gold conversion inflows, if it was not remedied earlier by activity in discounting, open-market operations or foreign exchange. This has nothing to do with France.

Also, France could just buy gold on the open market, without converting British Pounds directly with the Bank of England. No doubt the Bank of England would encourage France to do so, to minimize disruption. France would probably do this whenever the open market price was cheaper than the BoE price – in other words, whenever the British Pound's value was marginally above its gold parity. Note that gold conversion itself would cause this: if the Bank of France converted a little bit of gold with the BoE, leading to an incipient contraction of the monetary base by the BoE and an incipient rise of the Pound's value, then conversion would naturally stop since the open-market price for gold would be cheaper. The BoF would obtain its gold from the open market, bypassing the BoE.

So we can see that France could not really affect anyone else. They demonstrably did not affect anyone else – other currencies also remained at their gold parities, with no particular difficulties. Nor did anything the Bank of France did affect anything in France. The Franc remained at its gold parity value, and the Franc monetary base was what it needed to be to make that happen.

Now, if you have a little common sense, this should be rather obvious. The Great Depression was probably the biggest peacetime economic catastrophe of the 19th and 20th centuries combined. Are we really going to say that it happened because some gold moved from one vault to another? Are we really going to claim that, even though gold bullion changes hands every day, the fact that the gold ended up in the vaults of the Bank of France, instead of someone else's vaults, blew up the economy...not in France, which was actually relatively healthy until the end of 1931...but in the United States, and the world as a whole?

Someone who makes those kinds of claims better have something impressive to back it up. 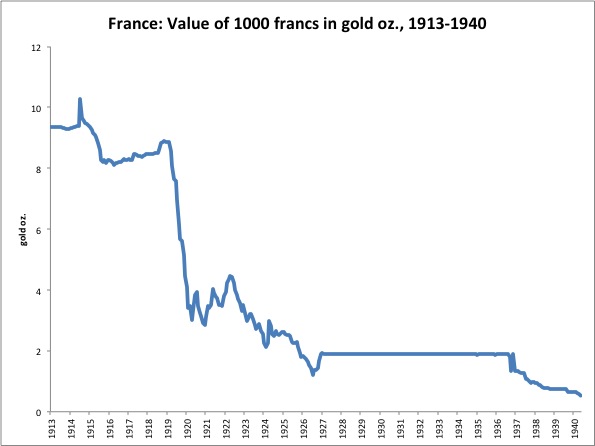 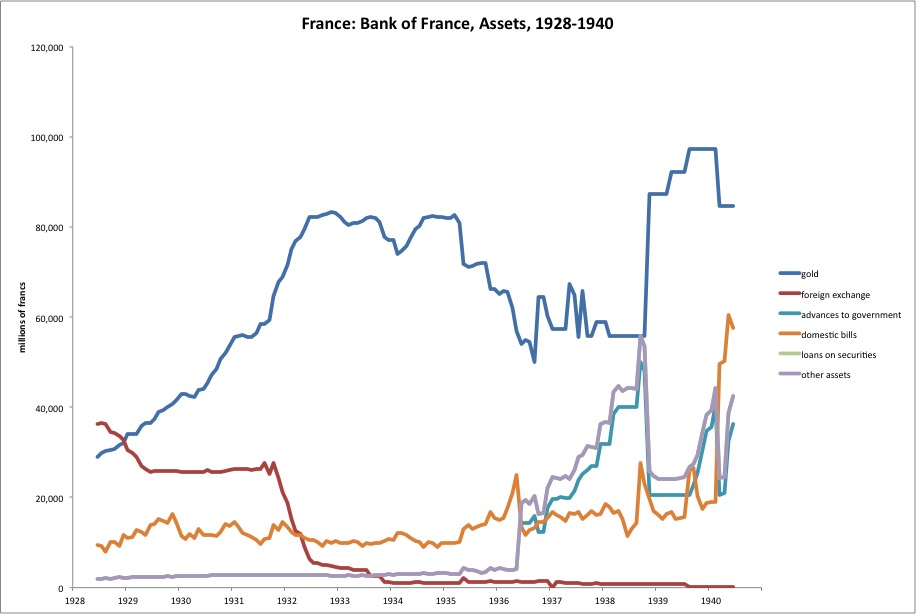 With the restoration of convertability, the accounting at the Bank of France was cleaned up a bit, so our dataset begins in 1928. This is from the Federal Reserve Banking and Monetary Statistics. 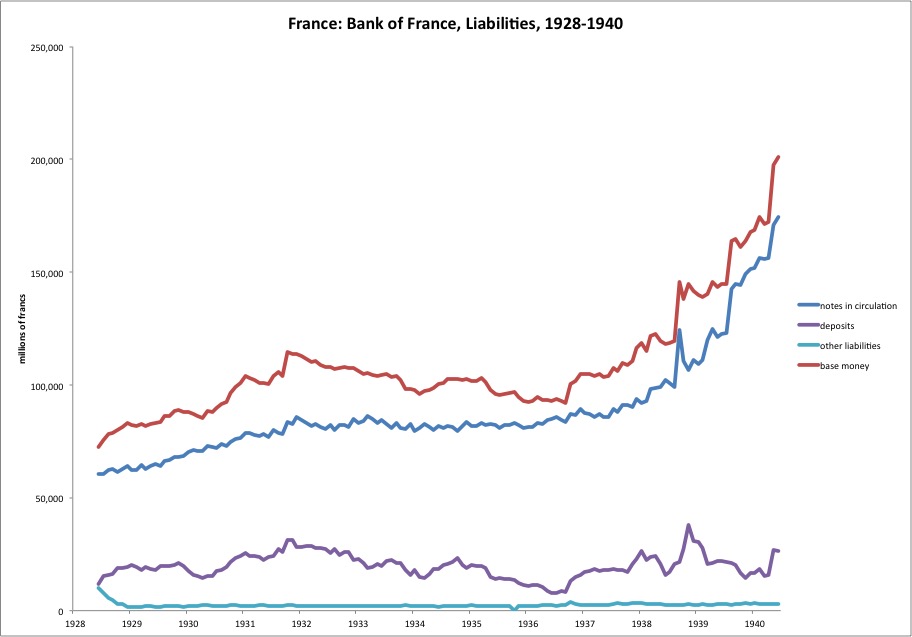 In 1928, the Bank of France held a large amount of foreign reserves primarily in the form of British Pounds. From the onset of convertibility to mid-1929, the Bank of France sold off some of these reserves, and purchased bullion. This is apparent in the decline in foreign exchange reserves in 1929. Then, things didn't change much until after the British Pound was devalued in September 1931. The Bank of France, not surprisingly, decided that they didn't want to hold the debt of foreign governments anymore, so they sold off the remainder of their reserves and bought more bullion. This basically returned France to its pre-1914 practice, of holding no foreign exchange reserves.

This simple reserve asset swap does not change the monetary base. In addition, the Franc was a popular currency and demand for it was rising – not surprising, as it was now a reliable gold-linked currency. This manifested in substantial gold inflows, matched by a rise in the monetary base. Thus, the Bank of France was accumulating gold from two sources: first, conversion of its forex reserves, and on top of that, gold inflows related to increasing demand for Francs. The combination of the two resulted in a big expansion of total gold holdings for France. 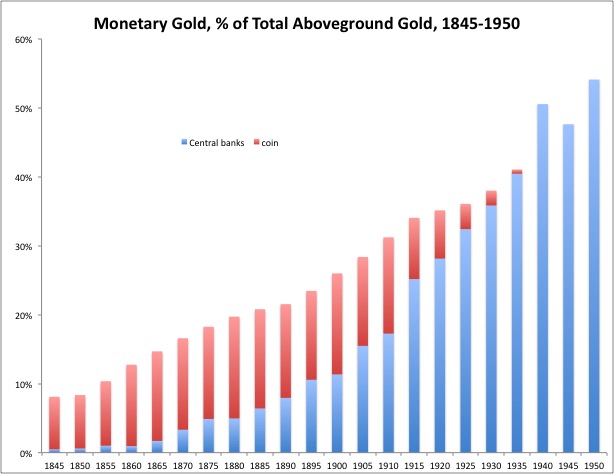 As you can see, there was no great increase in monetary gold (coinage and bank reserves) between 1925 and 1930 for the world as a whole. We are now dealing essentially with argument No.5, that there was some dramatic rise in gold's value due to central bank bullion accumulation, led by the Bank of France. Although I put this in a separate category (No.5), it tends to pop up when discussing the "blame France" arguments (No.4), so I'll mention it here. 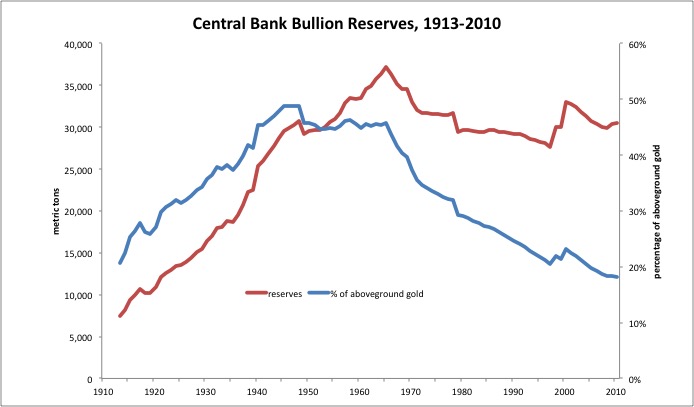 Here we can see the same long uptrend, now with annual data from 1913. It's a very smooth line, with no discernible effect from the Bank of France's accumulation in 1929 and 1932. 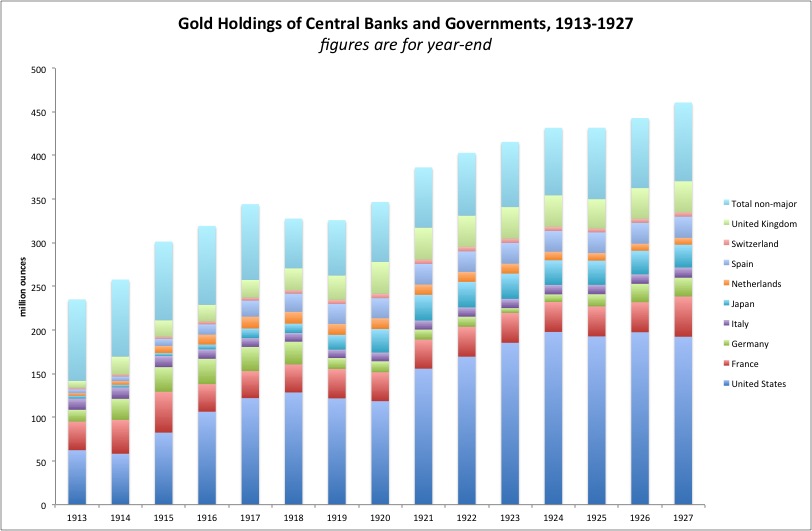 This monthly data shows that France did indeed hold a larger portion of world gold reserves, especially after 1931. 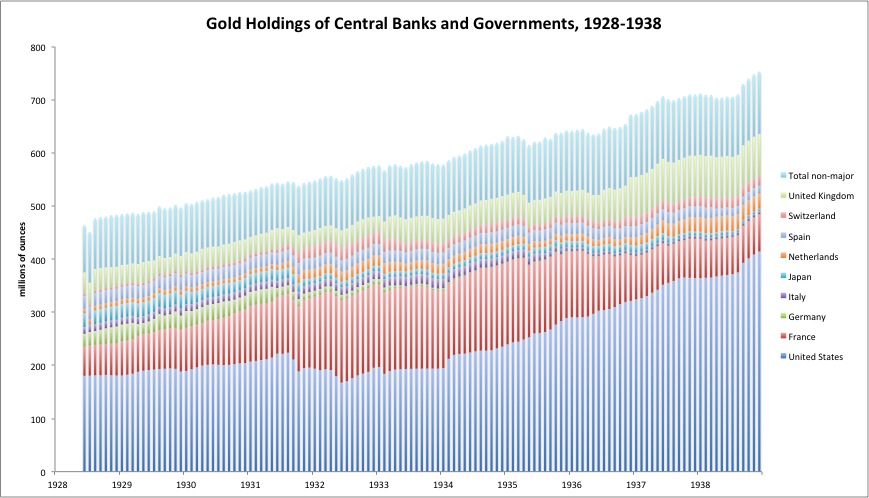 But, the trend of accumulation of central banks as a whole (top line) is about as smooth as can be.