END_OF_DOCUMENT_TOKEN_TO_BE_REPLACED

Burning carbon getting tougher, but no less popular...
It's BECOMING more and more difficult to be in the fossil fuel business, writes Frank Holmes at US Global Investors.
On both sides of the Atlantic, lawmakers and unelected bureaucrats are turning up the heat, so to speak, on companies over the issue of climate change.
In the US House of Representatives, Democrats have launched an inquiry into whether oil companies have participated in so-called "climate disinformation." Last week, letters were sent to top executives of Exxon Mobil, BP, Chevron and Royal Dutch Shell seeking records, and hearings are scheduled for next month.
Meanwhile, the Securities and Exchange Commission (SEC) is expected to propose a series of new disclosure requirements all publicly traded companies must make, possibly as soon as year-end, to inform investors about potential climate risks associated with their business.
In Europe, the strategy appears to be to choke off any and all lending to the fossil fuel industry. Next year, the European Central Bank (ECB) is expected to look into the trading operations of major banks in what's being called a climate "stress test," and at least one big activist investor group, ShareAction, is pressuring lenders to cut all ties to fossil fuels.
Of course, none of this accounts for the fact that fossil fuels still supply around 80% of the world's energy.
Or that many leading oil and gas producers are investing billions in renewable energy, including wind and solar, and energy storage technology. Chevron, in fact, just unveiled plans to triple its investment in lower carbon energies to $10 billion through 2028.
Climate change was top of mind at the Gold Forum Americas conference I attended and spoke at last week in Denver.
In conversations I had with some of my peers, the question was raised whether certain scientists could be held financially liable for spreading their own "climate disinformation", which has sown fear and prompted policymakers to enact new draconian taxes and regulations.
Here's how one colleague put it:
In nearly every other profession – from physician to engineer to money manager – there are mechanisms in place to hold bad actors accountable. Why is that not the case with scientists, who may make promissory or misleading statements that materially impact individuals and businesses?
The idea sounds farfetched, but it's not completely unheard of. In 2012, an Italian court found six seismologists guilty of manslaughter for failing to give proper warning of an earthquake that killed some 300 people. This ruling was overturned in 2014, but it had the effect of putting public-facing scientists around the world on high alert.
To be clear, I don't support charging scientists with crimes. Modern technology, as advanced as it is, still cannot successfully predict earthquakes with any degree of certainty.
Perhaps the same is true of the climate. We are led to believe that climate change is responsible for causing more hurricanes, for instance, but if you look at the Environmental Protection Agency's (EPA) own data, you'll find that the number of North Atlantic hurricanes that strike the US every year has been trending down over the past 120 years.
To date, the deadliest natural disaster in US history remains the Great Galveston hurricane, which pummeled the Texas city in 1900, several years before Henry Ford even began mass producing the Model T. 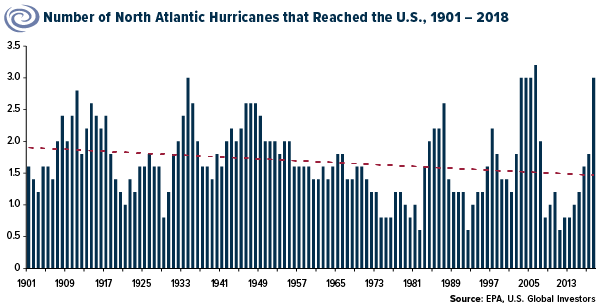 I'm bringing all of this up not to pick a fight. I happen to believe a majority of climate scientists do honest work and have good intentions.
The problem is that they also have the ear of some agenda-driven politicians and bureaucrats who actively seek out new reasons to make it more difficult to run an energy or mining company.
Up until this point, I haven't said anything about the media's role in spreading FUD, or fear, uncertainty and doubt. The cause of a lot of people's apprehensions can be laid at the feet of not just cable news channels, which sensationalize everything, but also social media platforms, which have allowed misinformation to run wild.
Here, I'm talking specifically about misinformation related to vaccines.
This topic also came up in Denver. I'm fully vaccinated against Covid and have even received a third booster shot, but many of my colleagues haven't gotten their first jabs. When I ask why, they invariably say it's because they don't trust the government.
If that's the case, I say, do they own gold or Bitcoin?
That aside, I believe the vaccine is our best hope to get back to life as it was before the pandemic. The planes and airports were packed on my way to and from Denver, but Transportation Security Administration (TSA) data shows that commercial air traffic is still down around 25% on average from the same time in 2019. That's partly due to the fact that too many Americans are choosing not to get vaccinated.
In fact, the US is about to become the least vaccinated high-income G7 country. Despite the US having the largest stockpile of Covid vaccines, and despite it having a dramatic head start, the country will soon have the lowest vaccination rate of any G7 nation after Japan surpasses it.
But there's also some positive financial news, even now from 2020. In a year when air travel demand was clobbered by the pandemic, airlines managed to keep the lights on thanks in large part to ancillary fees. Like sales in general, ancillary fees fell in absolute terms, but they represented a bigger piece of airlines' total revenue last year. 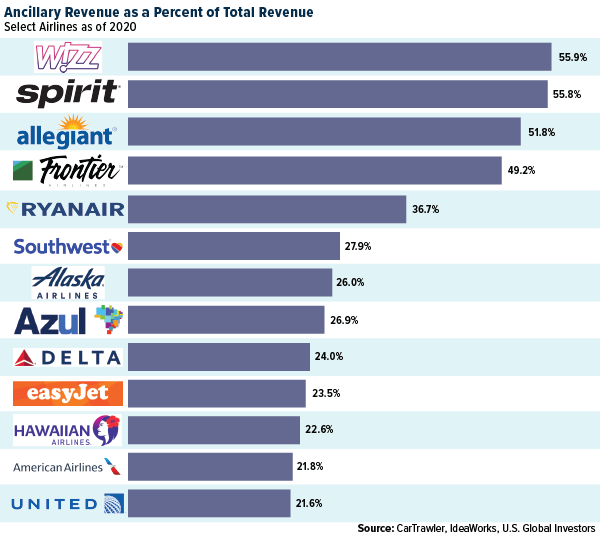 Low-budget carriers appeared to benefit the most. Non-ticket sales were nearly 56% of Hungary-based Wizz Air's total sales, the highest of any other company. Spirit Airlines was a close second, followed by Allegiant Air, Frontier Airlines and Ryanair.
More good news came out of Ryanair last week. The Irish low-cost carrier announced that it was lifting its growth target to 50% over the next five years, up from a previous target of 33%. This would mean Ryanair would carry more than 225 million passengers a year by 2026, after expanding into markets such as Italy, Scandinavia and Morocco.
By this winter, the carrier hopes to operate about 90% of its pre-Covid capacity. Wheels up!