END_OF_DOCUMENT_TOKEN_TO_BE_REPLACED

There has never been a serious effort to cut government spending...

TEXAS Republican Ron Paul's maverick crusade to "Audit the Fed", and to rein-in the "fourth branch" of the US government, suffered a major blow in the wake of the November 6 elections that saw President Barack Obama re-elected, writes Gary Dorsch at SirChartsalot.com.

Adding insult to injury, the Republican Party not only failed to secure a majority in the Senate, but it lost two seats. Mr Paul is the author of a bill to audit the clandestine activities of the Fed that passed the House by a 327-98 vote on July 25, exceeding the two-thirds majority needed. Astoundingly, 89 Democrats joined 238 Republicans to approve it.

Many Republicans and some Democrats have criticized the Fed's heavy handed activities in the marketplace, such as its multi trillion Dollar bailouts of the Wall Street banking Oligarchs, its massive monetization of the US Treasury's debt, through its radical "Quantitative Easing" (QE) scheme, and its basement of the purchasing power of the US-Dollar.

"The Fed has more power over the economy than anyone else in the country. Yet they are virtually unaccountable and the American people have very little idea what goes on behind closed doors at the Fed. The Fed operates in almost complete secrecy, and the whole idea that they can deal in trillions of Dollars and that nobody is allowed to ask them a question is a moral hazard," Mr Paul says. Dennis Kucinich, a Ohio Democrat agrees, "It's time that we stood up to the Federal Reserve that right now acts like some kind of high, exalted priesthood, unaccountable to democracy."

Commenting on the Nov 6 election results, Mr Paul lamented that the US economy has already veered over the "fiscal cliff," and that the nation is being transformed into a European style socialist welfare state. Mr Paul sees no chance of righting the ship in a country where too many people are already dependent upon $1 trillion of welfare assistance provided by states and the federal government. "We're so far gone. We're already over the cliff. We cannot get enough people in Congress in the next 5-to-10-years who will do wise things."

Mr. Paul, who is retiring after 12 terms in the House, said "The people in the Midwest voted against Romney: 'Oh, they have to be taken care of!' So that vote was sort of like laughing at Greece. People do not want anything cut. They want all the bailouts to come. They want the Fed to keep printing the money. And they don't believe that we've gone off the cliff or are close to going off the cliff. They think we can patch it over, that we can somehow come up with some magic solution. But you can't have a budgetary solution if you don't change what the role of government should be. As long as you think we have to police the world and run this welfare state, all we are going to argue about is who will get the loot," Paul added. 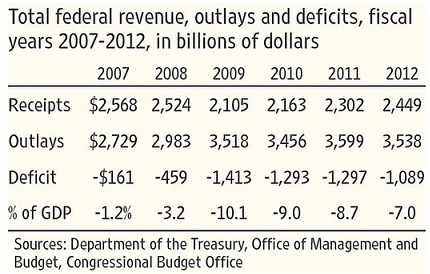 During Mr Obama's first term in office, US federal spending jumped 18% to a record $3.52 trillion and spending has remained constant since then. There's never been a serious effort to cut back on expenditures. As a result, the US government has run deficits totaling $5.1 trillion over the past four years.

There's never been a string of budget deficits that even remotely approaches these staggering amounts; the last year of George W. Bush's tenure, the previous record budget deficit was $459 billion. In order to finance these budget deficits, the White House has mostly relied upon the Federal Reserve and foreign central banks, to buy the lion's share of the newly auctioned Treasury debt, and to a lesser extent, risk adverse investors fleeing the stock markets and Euro zone bond markets, have been avid buyers.