END_OF_DOCUMENT_TOKEN_TO_BE_REPLACED

Or, the financialization of America and its discontents...

LABOR's share of the national income is in freefall as a direct result of the optimization of financialization, writes Charles Hugh Smith on the OfTwoMinds blog in Addison Wiggin's Daily Reckoning.

The Achilles Heel of our socio-economic system is the secular stagnation of earned income, i.e. wages and salaries. Stagnating wages undermine every aspect of our economy: consumption, credit, taxation and perhaps most importantly, the unspoken social contract that the benefits of productivity and increasing wealth will be distributed widely, if not fairly. 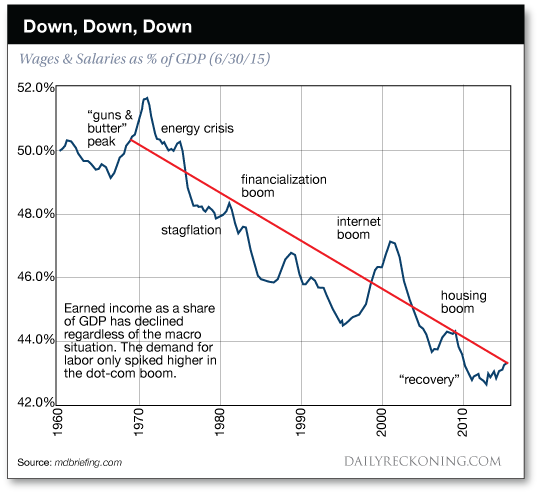 This chart shows that labor's declining share of the national income is not a recent problem, but a 45-year trend: despite occasional counter-trend blips, labor (earnings from labor/ employment) has seen its share of the economy plummet regardless of the political or economic environment.

Given the gravity of the consequences of this trend, mainstream economists have been struggling to explain it, as a means of eventually reversing it.

The explanations include automation, globalization/offshoring, the high cost of housing, a decline of corporate competition (i.e. the dominance of cartels and quasi-monopolies), a failure of our educational complex to keep pace, stagnating gains in productivity, and so on.

Each of these dynamics may well exacerbate the trend, but they all dodge the dominant driver of wage stagnation and rise income-wealth inequality: our economy is optimized for financialization, not labor/earned income.

What does our economy is optimized for financialization mean?

It means that capital and profits flow to the scarcities created by asymmetric access to information, leverage and cheap credit – the engines of financialization.

Together, these enable financiers and corporations to get the borrowed capital needed to acquire and consolidate the productive assets of the economy, and commoditize those productive assets, i.e. turn them into financial instruments that can be bought and sold on the global marketplace.

Labor's share of the national income is in freefall as a direct result of the optimization of financialization.

Meanwhile, the official policy goal of the Federal Reserve and other central banks is to generate 3% inflation annually. Put another way: the central banks want to lower the purchasing power of their currencies by 33% every decade.

In other words, those with fixed incomes that don't keep pace with inflation will have lost a third of their income after a decade of central bank-engineered inflation.

But in an economy in which wages for 95% of households are stagnant for structural reasons, pushing inflation higher is destabilizing.

There is a core structural problem with engineering 3% annual inflation. Those whose income doesn't keep pace are gradually impoverished, while those who can notch gains above 3% gradually garner the lion's share of the national income and wealth.

Wages for the bottom 95% have not kept pace with official inflation (never mind real-world inflation rates for those exposed to real price increases in big-ticket items such as college tuition and health care insurance).

Most households are losing ground as their inflation-adjusted ( real) incomes stagnate or decline.

The stagnation of wages is structural, the result of multiple mutually reinforcing dynamics.

These include globalized wage competition (everyone in tradable sectors is competing with workers around the world); an abundance/oversupply of labor globally; the digital industrial revolution's tendency to concentrate rewards in the top tier of workers; the soaring costs of labor overhead (health care insurance, etc.) that diverts cash that could have gone to wage increases to cartels, and the dominance of credit-capital over labor.

The only possible output of pushing inflation higher while wages for the vast majority are stagnating is increasing wealth-income inequality – precisely what's happened over the past decade of Federal Reserve policy.

The stagnation of wages isn't supposed to happen in conventional economics.Once unemployment drops to the 5% range, full employment is supposed to push wages higher as employers are forced to compete for productive workers.

Alas, conventional economics is incapable of grasping the fluid dynamics of labor, automation, capital, globalization and cost structures dominated by monopolies and cartels in the 4th (digital) industrial revolution.

In sector after sector, employers can't afford to pay more wages as labor overhead costs march ever higher while prices are held down by competition and oversupply. In other sectors, the rigors and supply, demand, stagnant sales and productivity push employers to automate whatever can be automated, and push tasks that were once performed by employees onto customers.

So why are central banks obsessed with pushing inflation higher?

The conventional answer is that a debt-fueled economy requires inflation to reduce the debtors' future obligations by enabling them to pay their debts with constantly inflating currency.

This same dynamic enables the central state to pay its obligations (social security, interest on the national debt, etc.) with "cheaper" currency.

After a decade of 3% inflation, a $100 debt is effectively reduced to $67 by the magic of inflation. If wages rise by 3%, the worker who earned $100 at the start of the decade will be earning $133 by the end of the decade, giving the worker 33% more cash to service debts.

All this wonderfulness of inflation is negated if wages can't rise in tandem with inflation. In the view of the central banks, deflation (i.e. wages buy more goods and services every year) is bad, and it's not hard to understand why.

The private banking sector benefits from inflation as well. The lifeblood of banking profits is transaction and processing fees from issuing new credit. Since inflation enables households to buy more stuff with credit and service more debt, banks benefit immensely.

Deflation, on the other hand, is Kryptonite to bank profits – households earning less every year are more likely to default on existing debt and eschew new debt. As wages stagnate, an increasing%age of the populace becomes uncreditworthy, i.e. a marginal borrower who isn't qualified to borrow (and thus spend) more.

Unfortunately for the Fed and other central banks, there is no way they can push wages higher to keep pace with inflation. Short of creating $1 trillion in new currency and sending a check for $10,000 to every household (something central banks aren't allowed to do), central banks can't force employers to pay higher wages or force customers to pay higher prices to enterprises.

Pushing inflation higher while wages stagnate can be charitably called insane. Less charitably, it's evil, as it strips purchasing power and wealth from all whose income isn't keeping pace with central bank-engineered inflation.