END_OF_DOCUMENT_TOKEN_TO_BE_REPLACED

It's hard to invest in a world of yieldless junk...

"No government has ever commanded the resources at the disposal of our ungodly Leviathan, which consumes about 25% of the product of the world's richest country. It is driven by a voracious alliance of government's own employees, and those who receive benefits from the state. At least 90 million Americans either depend directly on government handouts or jobs, and each private worker must support not only himself and his family, but also carry a government worker on his shoulders."

THE FINANCIAL MARKETS don't really do the long term anymore, writes Tim Price on his Price of Everything blog.

But if they did, they might spend less time drooling at the prospect of more monetary crack, and more time wondering who will be funding all the government debt that now towers above everyone further than the eye can see. CLSA's Russell Napier (hat tip to Macro Advisors' Filip Ruszkowski) recently pointed to an ominous development from the summer of 2011:

...a terrible burden fell upon the people of the USA. For the first time in 15 years, those who had money (savers) began to fund their government, rather than the printers of money (central banks). This shift has already hurt private-sector growth and asset prices, and as federal debt to GDP reaches 100%, it will squeeze out private-sector activity. Structural moves to coerce markets into funding government have begun in Europe and will come to the USA too... 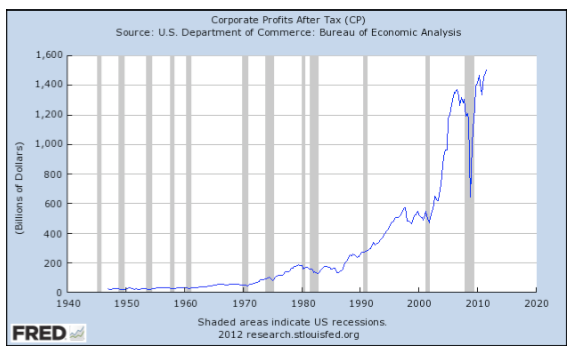 The chart above confirms that US corporate profits have now reached record levels as a percentage of GDP. They are unlikely to stay there. Napier suggests, perfectly logically, that when the government needs money to fund itself, it will target those constituents that actually have some. That is, in other words, wealthy individuals and corporations.

What will be awkward about this financial repression of the moneyed classes, if it comes (which it surely will), is the timing. Well, not just the timing, but the yields on offer consistent with that timing. With the benefit of hindsight it would have been no bad thing to be coerced into buying US Treasuries when they yielded, say, 16% (the chart below shows generic 10 year yields going back to 1979; source: Bloomberg). But now that they yield 2% or so (a negative real yield of 1% or so using official inflation data), well, who wants that ? Answer: not foreign central banks, many of whom have stopped buying this yieldless junk. 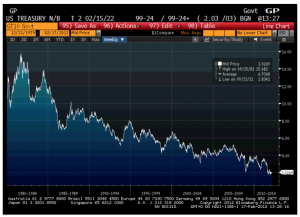 But somebody will have to buy it. As bank-robbers and their public sector rivals, governments, know, if you need money, go where the money is. Napier points out that previous peaks in the corporate profit-to-GDP ratio were 1966, 1997 and 2006. Subsequent long-term returns from equities were uniformly poor. As he makes clear, there is a difference between central banks and the private sector when it comes to buying government debt. Central banks can print money to finance their purchases, which makes them more or less wholly price-insensitive. But the private sector cannot print money — it will be forced to sell other assets to pay for the government debt it will soon be coerced into buying.

Perhaps some of those other assets will be stocks. Stocks will get smashed in any case, because the private sector will also have to get used to paying more tax. (The government will get its money one way or another.) More tax = lower net profits, obviously. Tax paid by corporations is close to its average level of the past 30 years. More awkwardly, the federal debt to GDP ratio over the same period, Napier observes, has risen from 32% to 100%. The UK faces a similar problem, which makes the current euphoria in FTSE-land just as difficult to rationalize. Absent QE, and given the potential for a rather messy bang emanating from Greece over the coming months, and accepting an economy facing dollops of austerity well into the future, should UK stock markets really be as euphoric as they currently are ?

UK government bonds are comparably unattractive to their American cousins. The chart below (source: Bloomberg) shows generic 10 year Gilt yields over the past 20 years. Being forced to buy them at 10% might not have been so bad. Being bludgeoned into buying them at 2% will be a little more painful. 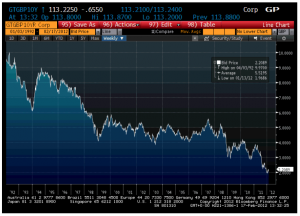 So how precisely will governments go about stealing savers' money ? The Dutch pensions regulator gave an indication of one possible wheeze back in February 2011 when it ordered the Stichting Pensioenfonds Vereenigde Glasfabrieken (bless you !) pension fund to sell its gold holdings (13% of the fund) on the premise that it was too risky.

In an NBER paper last year, Carmen Reinhart and M. Belen Sbrancia pointed the way. As their abstract states:

Historically, periods of high indebtedness have been associated with a rising incidence of default or restructuring of public and private debts. A subtle type of debt restructuring takes the form of financial repression.

Financial repression includes directed lending to government by captive domestic audiences (such as pension funds), explicit or implicit caps on interest rates, regulation of cross-border capital movements, and (generally) a tighter connection between governments and banks.. Low nominal interest rates help reduce debt servicing costs while a high incidence of negative real interest rates liquidates or erodes the real value of government debt. Thus, financial repression is most successful in liquidating debts when accompanied by a steady dose of inflation

The UK government has already achieved partial control of directed lending given that it owns half of our banking system. (Not that it seems to know how to control its remuneration. But then it is practically a binding characteristic of governments to be half-assed about virtually everything.) Both of the Anglo-Saxon economies have also achieved saver theft status by the manipulation of interest rates. Next on the list will be a creeping abuse of those captive domestic audiences and, perhaps, regulation on capital controls.

Very few of these will actually be novelties. The US previously had Regulation Q, for example, which put a government-sanctioned limit on the interest rates available for savings deposits. Indeed Reinhart and Sbrancia point out that the widespread use of such policies between 1945 and 1980 has been‚ 'collectively forgotten'. We have had half a century of increasingly free markets. In the official governmental version of reality, those markets became too free, and now require the firm hand of the state. Governments are unlikely to acknowledge the extent to which their own untenable borrowings laid the groundwork for the financial crisis.

Highly paid shills for the status quo on Wall Street have recently been wheeled out to observe the fundamental ugliness of western government bonds. They are correct. This is an asset class that has managed to defy the laws of economics in becoming ever more expensive even as its supply swells. Their response has been to recommend piling into stocks instead. The logic here is not so pristine. If Napier's thesis is correct, the West faces a period of outright deflation, which will be deeply traumatic for exactly the sort of speculative stocks that have lately done so well. Admittedly, the picture is confused, and prone to all sorts of political horseplay, as observers of the long-running Eurozone farce can attest.

Nevertheless, when faced with a) huge underlying uncertainties; b) structurally unsound banking and government finances; and c) central banks determinedly priming the monetary pumps, we conclude that the last free lunch in investment markets remains diversification. G7 government bond markets are a waste of time (though you may end up being cattle-prodded into them regardless). But there are still investment grade sovereign markets offering positive real yields. Stock markets are partying like 1999. Which, in many cases, it probably is. We would normally advise to enjoy the party but dance near the door. This time round, we weren't invited to the party — and we don't mind in the slightest.