END_OF_DOCUMENT_TOKEN_TO_BE_REPLACED

Currencies don't "float" against one another. They just sink at different rates...

FIAT MONEY – meaning money issued and enforced by government – is not directly convertible into a physical commodity at a specified amount, writes Mike Hewitt of Dollar Daze.

It is a type of credit money through which a central bank issues notes in exchange for interest-paying bonds by the government. The interest on these bonds is paid by the government primarily through the process of taxation. That is to say, by you and me.

Since the interest plus the principal always exceeds the initial amount borrowed, the government must continually borrow more money, at additional interest, in order to repay the central bank. Thus begins an ever-increasing spiral of debt.

Eventually, the system collapses – once the fiat money becomes worthless – when the government is unable or unwilling to support its value through taxation. Until then, the government creditors are able to accumulate extreme amounts of wealth.

Put another way, "by a continuing process of inflation, government can confiscate, secretly and unobserved, an important part of the wealth of their citizens," as John Maynard Keynes – chief architect of the modern-day economic system – put it.


All modern currencies are fiat money. This was agreed during the Bretton Wood Agreements of July 1944. Following the events of World War Two, all currencies would trade against the US Dollar, moving within a defined trading band. Countries would maintain their currency within this trading band by purchasing or selling US securities. Only the US Dollar was then directly convertible into Gold – previously the direct backing for all major currencies – at the rate of $35 to the troy ounce.

The reasons for this acceptance of the US Dollar as the world's "anchor currency" was because American soil was largely untouched by destruction from the war, leaving most of her manufacturing capacity intact. The arrival of the atomic bomb also helped establish US power – and US vaults also held an estimated 65% of the world's gold reserves by the end of WWII.

But come the late 1960s, nations around the world became increasingly concerned about the ability of the United States to keep the price of Gold at $35. America's involvement in the Vietnam War and spiraling costs for Lyndon B. Johnson's Great Society programs meant that, by 1970, the US gold reserve had shrunk to 16% of the world total. The US trade balance swung negative for the first time, threatening a still greater loss of Gold from America's vaults.

On August 15, 1971, President Richard Nixon unilaterally "closed the gold window", effectively taking the US Dollar off the Gold Standard by suspending its convertibility into bullion.

The following graphs show the resulting declines in the value of paper money, coming after 200 years or more of lost purchasing power. The best-performing currency of the 20th century, the Swiss Franc, still managed to lose 80% of its value. 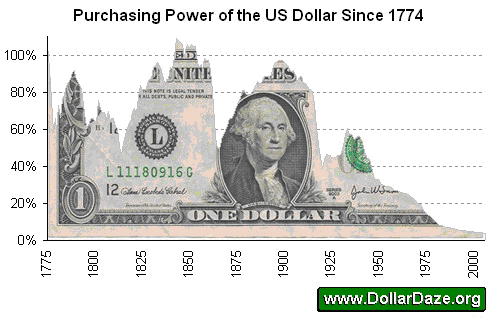 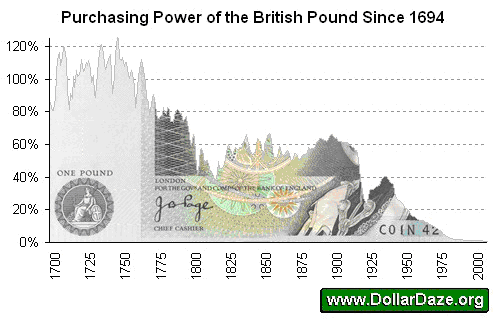 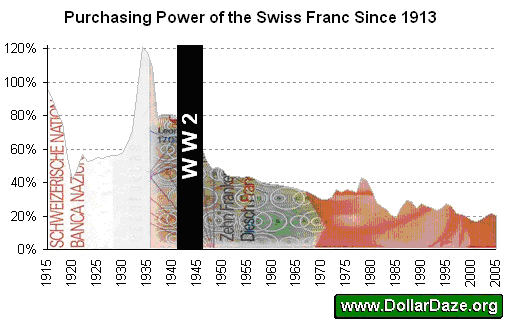 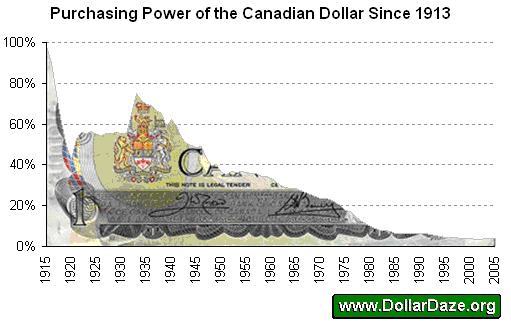 One must wonder if it can be said that currencies float against one another. It appears to be more of a case of them sinking at different rates.