END_OF_DOCUMENT_TOKEN_TO_BE_REPLACED

Where the balance-sheet leads, S&P follows...

"I do think the growth in the balance sheet is having some impact on the financial markets and on the valuation of risk assets..."

Here we have the unassailable and unimpeachable testimony of one Robert Kaplan. He, Mr.Kaplan, presides over the Federal Reserve's Dallas branch office.

And so a central bank grandee gives it straight...and stamps our dark suspicions with an official seal.

For this has been our claim:

The latest stock market fever owes not to trade, not to economics, not to "fundamentals".

It owes rather to a delirious four-month expansion of the Federal Reserve's balance sheet.

Let us re-enter Exhibit A into evidence: 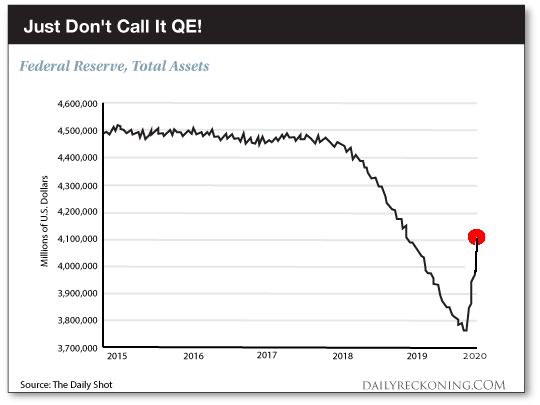 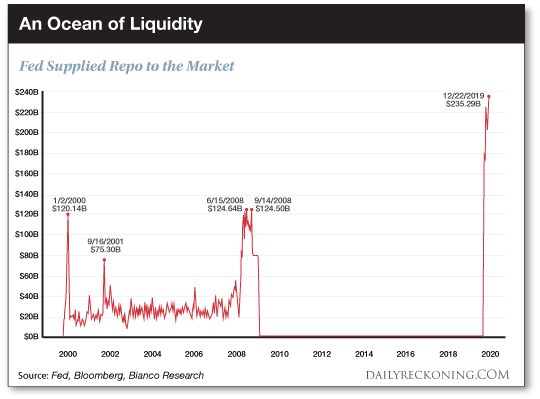 This, as we have noted repeatedly, is a direct response to liquidity shortages in the short-term lending markets. In brief summary:

The Federal Reserve has expanded its balance sheet $400 billion these past four months – a $1.2 trillion annualized rate. 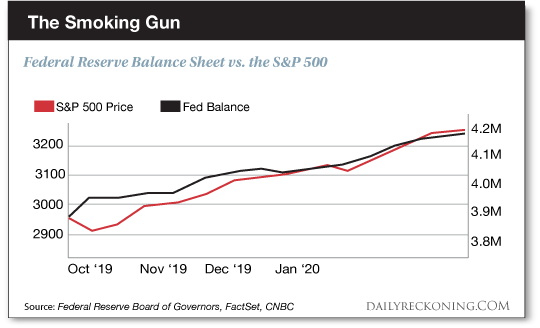 The Dow Jones once again crossed 29,000 last week. Tomorrow promises a fresh assault upon the peaks.

Should we then be surprised that investor sentiment presently runs to extreme greed?

What did it read one year ago today?

But that was before the Federal Reserve furled back its sleeves, spat upon its hands...and set to work...

Before it began hacking interest rates, before it halted quantitative tightening – before it sent the balance sheet ballooning.

One year later the stock market rises to record highs and sentiment runs to extreme greed.

When the crowd goes herding into the same railcar, we instinctively jump tracks.

And the railcar is filling fast...

"Some of the levels we've seen are, frankly, similar to what we saw in January of 2018."

We believe it is preparing to correct again. But not until the market uncorrects further yet.

The President just put his signature to the "phase one" trade accord with China.

The computer algorithms pluck the joyful news from the wires, and proceed to pummel the "buy" button.

Thus you can expect CNN's Fear & Greed Index to lurch even further into greed.

Meantime, the Federal Reserve huddles at Washington in a week's time.

It will not lower rates – but nor will it raise them up. Federal funds futures presently give 87.3% odds that rates remain in place.

Conditions will remain accordingly benign. And markets can continue their journey into the record books, unruffled and undisturbed.

That is why Bank of America warns markets presently careen toward "peak bullishness and dovishness."

What lies the other side of these lofty and treacherous peaks?

Let us now turn our attention to the great bugaboo of today's market, the skunk lurking in this growing woodpile.

As Morgan Stanley reminds us, that is the highest percentage in history.

"A ratio like this is unprecedented, including during the tech bubble," says Mike Wilson, who directs Morgan Stanley's US equity strategy.

These stocks account for much of the S&P's 2019 outperformance. Apple and Microsoft accounted for nearly 15% of all S&P gains.

Rarely before, we conclude, have so many investors...owed so much...to so few stocks.

But what if these wagon-pullers crack under the strain – and throw off the burden of leadership?

"These mega tech firms have been the front-runners in this record-long bull market as investors bet on superior growth and dominant market share in their respective industries. They were the biggest contributors to the market's historic gains last year and the trend shows no signs of stopping in 2020. However, multiple Wall Street strategists are sounding alarms on the increasing dominance of Big Tech, warning of a potential pullback in the stocks ahead."

Will anyone carry the standard forward should the leaders falter?

Next we come to the strategy of "passive investing".

Passive, because it rises or falls with the prevailing tide.

After the 2008 near-collapse, the Federal Reserve inundated markets with oceans of liquidity.

The tide rose, and all boats with it.

Technology stocks like Apple and Microsoft have led the way up.

Much of Wall Street has poured into these stocks...sat back on its oars...and rode the current to record highs.

"Active" asset managers fishing for winners could no longer separate them from the losers. The nets came up full of winners and losers alike.

All is peace while the tide of liquidity rises. But the danger is this, as we have written before:

When the tide recedes...it recedes. The same handful of stocks that hauled markets up on an incoming tide can drag them rapidly down on an outgoing tide.

"In a bull market, the effect is to amplify the upside as indexers pile into hot stocks like Google and Apple. But a small sell-off can turn into a stampede as passive investors head for the exits all at once without regard to the fundamentals of a particular stock...

"The technical name for this kind of spontaneous crowd behavior is hypersynchronicity, but it's just as helpful to think of it as a herd of wildebeest that suddenly stampede as one at the first scent of an approaching lion. The last one to run is mostly likely to be eaten alive."

Meantime, the Federal Reserve's balance sheet continues to expand, the fools continue to rush in...

And the gods continue to plot.