END_OF_DOCUMENT_TOKEN_TO_BE_REPLACED

Not like anyone noticed it anyway...
GIVEN all the ink and pixels spilled on Fed comments, let alone policy, you'd think someone would have spotted it, writes Adrian Ash at BullionVault.
But no. Not a word we can find online, and barely any from analysts either.
Yet back in September, the US central bank did something it last did in New Year 2005...
...eve of the peak in US housing...
...which proved to be eve of the global financial crisis...
...and still no one mentioned it.
Or hardly anyone. Which begs the question:
If the Fed raises rates above the pace of inflation but no one notices, does it still crash the economy? 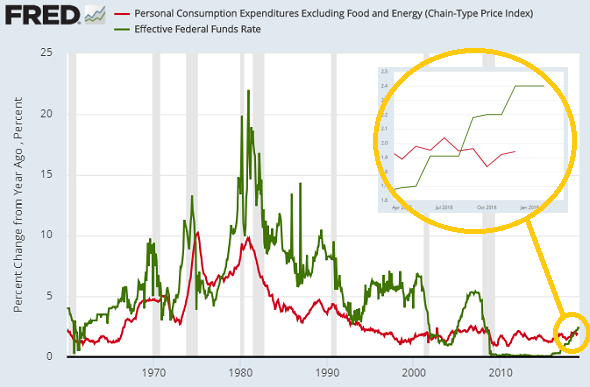 Maybe 'neutral' now means something else. But last fall Powell and his FOMC team clearly thought it meant higher than the rate of inflation.
The cost of living rose 1.9% per year on the Fed's preferred 'core' PCE measure at the end of 2018.
September's move took the Fed Funds rate above it. December's hike means the world's No.1 economy now has the highest cost of borrowing in real terms since New Year 2008.
Does it matter?
The Fed since 1960 held its key interest rate above the pace of inflation nearly 72% of the time, in a total of 510 out of 710 months. Yet only 80 of them came since the turn of this century some 230 months ago. That's barely one-third of the time.
Something changed since 2000 in other words. But whatever 'it' is, the Fed last September thought it had changed back.
This turnaround in the US Federal Reserve's official policy rate has aroused remarkably little comment to date.
The South China Morning Post sort of mentioned it this week only to get it wrong, saying that "Today real rates are only just in positive territory...[something] highly encouraging" for a US and global economy swollen by debt.
Bloomberg meantime spotted the issue but in the wrong place, pointing only to medium-term US bonds (where "the drop in real rates [was] providing a meaningful boost to equity valuations" for an hour or two) and noting that real policy rates are struggling to get above zero in, umm, Canada!
"Even as FOMC expectations declined materially in the past six months," the news-wire quotes Canadian bank CIBC's head of rates strategy Ian Pollick, "financial markets continued to defend the idea that Bank of Canada policy would continue to move higher until the real policy rate was positive at the limit."
But just like you'd think of the US rate – the world's single most important overnight borrowing cost – "Investors are questioning the Bank of Canada's view that its policy rate needs to be above zero in inflation-adjusted terms," Bloomberg goes on.
So why isn't anyone questioning Jerome Powell's handiwork?
To repeat: The US central bank has raised its key policy rate above the pace of inflation. It last tried that in early 2005, again coming off a period of "emergency" low rates imposed in response to a stock-market crash and economic slump.
If no-one else cares, why would BullionVault or its customers think this matters? First because when overnight policy rates pull in a different direction to bond yields, investors should know there's trouble ahead. Second because gold prices move inversely to real interest rates. Not all the time, and not tick by tick. But kinda and most clearly when – like Bloomberg rightly says of the US stock market right now – analyzed against interest rates on longer-term bonds.
For gold this connection also applies to the US Fed's key interest rate, again when adjusted by the pace of change in the cost of living. And ever-more so in recent years.
Over the last half century, the Fed Funds rate – when adjusted for US inflation – has moved in the opposite direction to US Dollar gold prices 55% of the time on all 12-month horizons. Across all 5-year time-frames that inverse relationship showed in 59% of all months since 1969. But zoom in to the last decade, and those figures rise to 67% and 79% of the time.
Real rates up, gold down in short. And if this pattern holds true over the next few months of 2019, gold prices may slip back below $1300...and even face a drop back below $1200...unless inflation rises into the summer or the Fed starts unwinding its last couple of rate hikes.
A rate cut is just what betting on the Fed Funds futures market is starting to expect. Because while pundits haven't noticed how high real rates have gone, at least some hot-money traders have.

Again, with so much ink and so many pixels devoted to this week's policy announcement from the Fed, you might think someone would spot this.
Prior to the Fed's previous set of projections in December, betting on future interest rates saw a one-in-three chance that, by January 2020, the US central bank would raise the cost of borrowing above today's current level of 2.5%.
That chance has now fallen to zero. Interest-rate traders see no chance of a Fed rate hike before next New Year...
...and that turnaround looks even more dramatic if you compare today's betting with how the futures market saw things back in September, on the day that the US stock market last set a new all-time record high (and gold edged up from multi-month lows).
Since then the Fed has also turned tail on 'quantitative tightening' too, announcing how it's going to stop selling its QE hoard of US Treasury bonds this September, sooner than expected.
Yet the Fed Funds rate in real terms has still risen, going from -0.77% per year on the eve of September's peak in the stock market up to +0.45% in December and now reaching almost +0.90% by the end of February.
That jump pretty much equaled 6 policy-rate rises of 0.25 in just 6 months, the kind of rise which a rate-hiking US Fed worked to achieve when it whacked the Treasury bond market in 1994, choked the Tech Stock Bubble in 2000, or tried to cool the housing market too late in 2005.
If the FOMC team of Jerome Powell now see what they've done as a policy mistake, stronger inflation would help fix it.
The US economy will otherwise have to adjust to repaying debt at a positive cost in real terms for the first time since the eve of the financial crisis. Or wait for the Powell Fed to throw in the towel and start cutting rates, back below zero in real terms.