END_OF_DOCUMENT_TOKEN_TO_BE_REPLACED

The 3-MONTH Treasury bill yield is demanding the Fed raise the Funds rate, says Gary Tanashian in his Notes from the Rabbit Hole.

And the Fed is listening.

Another 'hawkish' jawbone has come in the form of James Bullard and his call for a larger rate hike in March.

CME Group Fed Futures traders quickly adjusted their expectations to a 0.5% March hike at the behest of the Bullard jawbone.

The point of this post is that this heavy dose of expectations management may indeed result in 0.5% in March or it could be a shock absorber for the thesis that a 0.25% hike could come sooner.

Bottom line? If the Fed is caught this far off guard by where short-term interest rates already stand, anything is possible.

I would not advise you to listen to those who think they know what the Fed is thinking and insist that the Fed will not dare raise the Funds rate. They will dare and they will do it, barring any significant short-term changes to the current macro.

In my experience, the Fed has done what the bond market tells it to do almost without exception. Ben Bernanke held ZIRP for a deplorably long time but that was because the T-bill on the chart below allowed him to.

I've added the 3 month T-bill yield (IRX, orange) to this chart and you will notice that this short-term yield and the Fed Funds rate go pretty much in lockstep. When IRX finally rose in 2015 Bernanke's successor, Janet Yellen, promptly got in gear out of the 7 year perma-ZIRP phase . 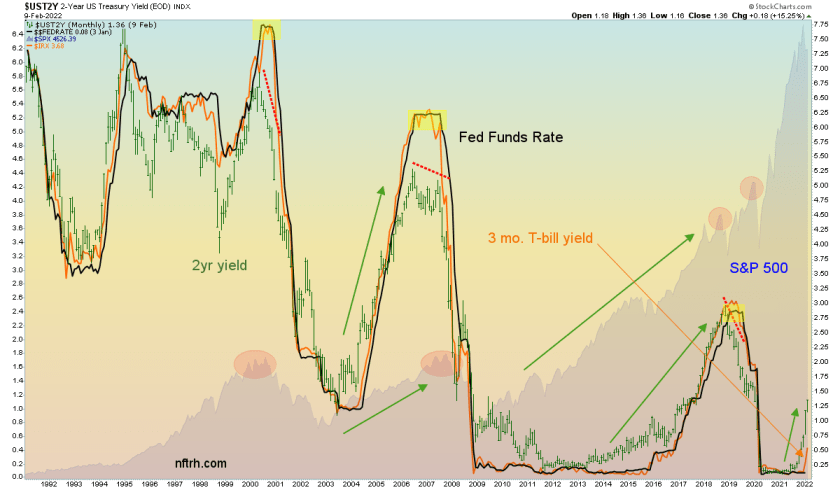 Take a look at the lower right corner of the chart. In that gap between the orange line and the black line the Fed is exposed as being behind the curve with respect to inflation. So sure, all these media headlines about backward-looking inflation do represent the vast mountain of inflationary layers the Fed laid in 2020 and it's sitting there like a toxic pile of monetary sludge. Now the Fed would undertake the task of cleaning it up. And it is late getting on that task.

This chart has been used previously to show that it is historically well after the Fed begins a rate hike cycle that the stock market tops out. But in this case I want to zoom in on the orange IRX and its historically tight relationship with the funds rate.

The bond market – in its long-term yields and especially short-term yields (the 2yr, green, has been demanding action since late last summer) – is demanding a rate hike now, and I don't think the Fed will find it comfortable waiting until mid-March and the next FOMC meeting.

Would-be pressure relief could come from one of two sources:

Of course, Thing 1 could be the trigger to Thing 2. So there's that too.

It's a complicated set of circumstances. Don't be caught making assumptions in this market and also don't be caught following gurus recycling dogma.

If the Fed is caught this far off guard, anything is possible and there's no guru alive who's got anything but guesses at hand.

Now, as to whether or not the Fed will be able to catch up to the curve in any reasonable time frame, that's another question altogether. It looks daunting, and I think the Jawbones know it.

The stern message is that the Fed Funds rate could be raised at any time, even before the next FOMC meeting on March 16, in my opinion.