END_OF_DOCUMENT_TOKEN_TO_BE_REPLACED

Chris Martenson on why money-printing can never lead to prosperity...

I HAVE been expecting a coordinated, global central bank action for a while now – one that would seek to print more money out of thin air, or "QE" (quantitative easing), as it is now called, writes Chris Martenson for Peak Prosperity.

Now we have two of the most important central banks, that of the US (the Federal Reserve) and in Europe (the ECB) having committed to open-ended, limitless QE.

The most recent announcement came from the Fed, and it had these features:

That laundry list can be summarized as 'we will do whatever it takes.'  If anyone was still wondering if the Fed would 'allow' deflation to happen on its watch under Bernanke, perhaps the above points in combination with QE 1 and QE 2 will settle their minds.

But will it work?

Well, that all depends on what your definition of 'work' is.

Without context, I really don't know how to explain the importance of these recent actions.  In order to address the implications of this historic move – remember, now is the time to keep a journal, as your future relatives will want to know all about what happened 'back then' – I'm going to rewind this story back a few years.

Since the very beginning of my public writings, I have leaned heavily towards the path of inflation, by which I mean money printing or its electronic equivalent, because even a cursory review of history will show that leaders have always chosen a little money printing today and the possibility of inflation tomorrow over the immediate pain of having to live within their means or with the consequences of their poor decisions.

That was just a fancy way of saying 'humans will be humans,' and while our technology has advanced tremendously over the past few decades, our DNA blueprints are virtually identical to those found in people living 50,000 years ago.  History can tell us much.

Our current predicament has its roots way back in the early 1980s, when something changed in our collective psyches that allowed us to abandon thrift and savings in favor of spending and borrowing.  This first chart, which references the US (but in reality could apply equally well to most developed countries) show how borrowing has outpaced income (debt vs. GDP). 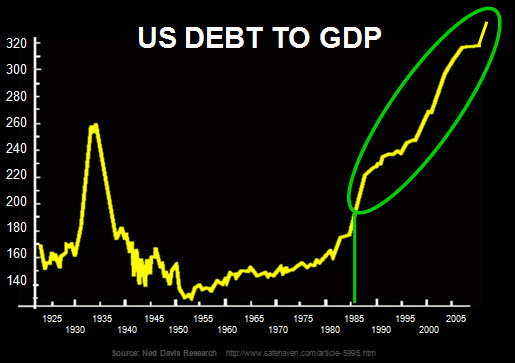 In order to believe that the Fed or any other central bank can get us back to 'normal,' you have to believe that it is normal for borrowing to exceed income and (here's the kicker) that it can do so forever.  Many people cling to the thin hope that somehow the Fed and its related entities across the globe can get us safely back on the yellow line in the above chart, angling forever upwards at 45 degrees.

Well, if it's not possible for you, personally, to forever borrow more than you earn without someday getting into financial difficulty, it is not possible for two or ten or 310 million of you to do so.  The math does not change simply because a nation is involved instead of an individual.

To really drive home the point that what our leaders have accepted as 'normal' and are endeavoring to resurrect is anything but normal, I find it useful to present this chart, which shows how the total credit market debt (that's everything) in the US has doubled and then doubled again and again and again over the past four decades: 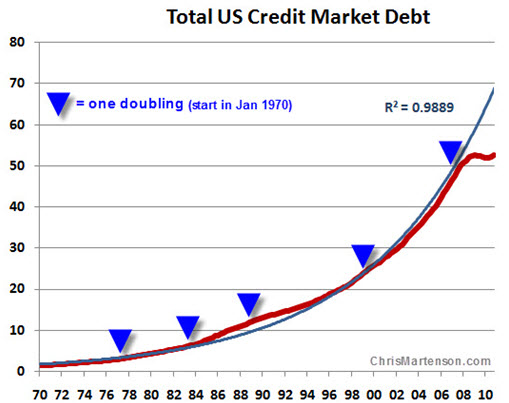 What 'getting back to normal' requires is that we find a way to continue expanding debt exponentially with a doubling time of around 8 years.  That's what the last forty years have seen, and that's the period during which every single leader at the Fed and in DC grew up and developed their views around 'how the world works.'

Unfortunately that's not how the world actually works.  In the real world your income and expenditures have to eventually balance, and the only question is whether this is accomplished through diligence or catastrophe.  The prior forty years were an admirably sustained departure from reality, but like all teenage road trips fueled with a pilfered credit card, the practices of those times were unsustainable and destined to end.

Hopefully by widening up our lens a little bit, we can more easily appreciate that instead of being 'normal', the vast expansion of debt was actually quite abnormal, and therefore attempts to resuscitate its prior trajectory are (1) certain to fail and (2) going to make the final crunch a lot more painful and damaging than it otherwise needs to be.

And oh, by the way – world oil is trading at $114 per barrel.  Recoveries are tricky business at half that price.

While left out of the official FOMC (Federal Open Market Committee) policy statements, but not Wall Street Journal editorial pages, is that a primary goal of the Fed is to boost stock prices.  The stated reason is that the so-called wealth effect will lead households to view their rising portfolio statements and go out and spend more money.  An underlying reason has to also be the fact that pensions, endowments, and other long-running actuarial pools of money are being destroyed by too-low rates of interest on bond holdings and desperately need stock-market gains to cover some of the shortfall.

QE and its distant cousin Operation Twist both serve to lift stock prices.  QE does this in two ways – first by dumping money into the financial system, which then has to go somewhere and do something, so some of it ends up in the stock market, and second by driving down interest rates, which has the tendency to push money into stocks.

Operation Twist, which is balance-sheet-neutral for the Fed (short-dated securities are traded for long-dated securities – it's a swap) only serves to drive down interest rates on the long end of the curve.  No new money is created.

As we can see, stocks respond well to both types of stimulus: 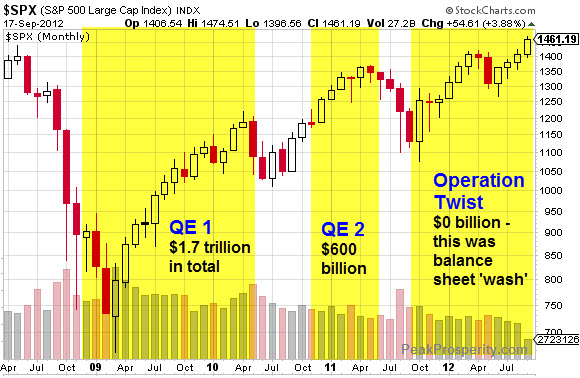 As we might also note, when the stimulus ends, stocks respond unfavorably.  It would seem that the Fed is now trapped and that if it ever pulls away from the market there will be a rout of historic proportions.

Commodities really only respond to new money, which makes sense.  Lower interest rates on the long end of the curve do not change the preference for commodities much, and so Twist might be expected to do little, if anything, for commodities.  That's exactly what we see in the data: 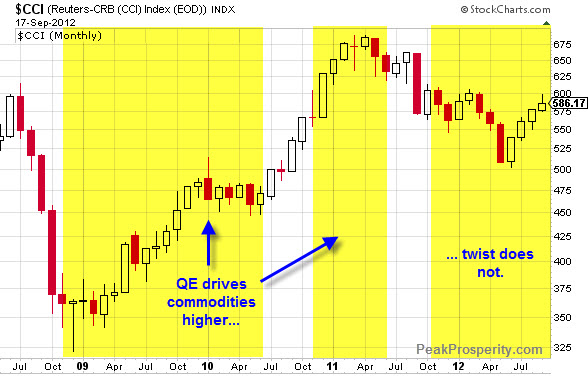 It is against the larger backdrop of borrowing and spending well beyond our means that we need to interpret this most recent effort by the Fed to print our way back to prosperity.

One way to look at the $40 billion per month in new printing is to compare it to individuals and households.  Remember, money only comes into your life through effort, and that's why it has value and can function as a store of value.  Once upon a time you could make the choice as to whether to work to find money (by mining gold or silver) or work to earn money by farming or practicing a trade, craft, or service.  Note that work was always involved.

What does it mean that the Fed can just up and print $40 billion per month indefinitely without performing any work whatsoever?

Well, let's put that in context.  If an individual earns $50,000 per year, then each month the Fed is effectively printing up the yearly output of 800,000 such individuals.  Said another way, if you earn $50k, then you'd have to work for 800,000 years to earn the same amount of money the Fed prints each month.

Given that the median household income is ~$50k, this means that after one year of MBS purchases, the Fed will have printed up as much money as 9,600,000 households will have earned.  Presto!  Just like that, the Fed is effectively creating the exact same purchasing power as nearly 10 million US households, or 25 million people (I'm rounding a bit here).

And nobody had to do anything except push a key on a computer a couple of times.

While the Fed can wrap this magic act in all sorts of covering language about dual mandates, maximum employment, and price stability, the simple fact remains that money printed out of thin air cannot, has not, and will not ever lead to prosperity.  How could it?  It arises without any effort at all, no work performed, no goods transformed or lives improved, no land planted and tended well, no services rendered, and no capital formed.  It is just conjured into existence.

It is just new money tossed after bad debts, with both remaining to work their different insidious effects on the economy and our daily lives.  If printed money could lead to prosperity, trust me – some culture would have worked it out long ago, because people every bit as clever and determined as those alive today (and with the same DNA software installed) have tried it again and again.

If it could work, then we should just print every household up a nice $1,000,000 check each year and let everybody stay home, take vacations, and drive nice cars.  It's just an absurd notion, and this is why you should keep a journal – you live in absurd times.

How does all this end?  Like it has every other time in history, with a final destruction of the currencies involved.  That's my best guess.

This is why I view all of the QE efforts to date, and those that will certainly follow, not only with suspicion but as a series of unforgivably narrowly-conceived efforts that will combine into one of the most colossal failures ever experienced by modern man.

I remain convinced that the fate of most will be to lose most of their wealth during this process by trusting that the majority cannot be wrong when that is exactly the most likely case.

Time to take action? Thinking of Buying Gold? Get lowest prices and benefit from secure storage in your choice or US, UK or Swiss vaults by using BullionVault...