END_OF_DOCUMENT_TOKEN_TO_BE_REPLACED

Investors are bracing for sticky inflation...

JUDGING by the stormy volatility we've seen in financial markets so far in 2022, you'd think the Federal Reserve was getting ready to hike rates, writes Frank Holmes at US Global Investors.

In all seriousness, it now appears that lift-off will happen as soon as March, after which the Fed will reportedly start unwinding its $9 trillion balance sheet.

None of this should come as a surprise to most of you. Investors, in fact, have already begun teeing things up for a new tightening cycle as well as sticky inflation.

2021 was a record year for US-listed ETFs, attracting over $900 billion in net flows, and the chart below, courtesy of CLSA, shows where investors were allocating capital in the final two weeks of the year.

As expected, technology saw the heaviest outflows, as the sector tends to be highly capital-intensive and has among the most elevated valuations.

It also makes sense for financials to attract some of the biggest inflows in anticipation of higher rates. However, some may initially scratch their heads to find real estate in the number one spot. Don't higher rates increase borrowing costs and decrease property values?

Although that's generally true, real estate investment trusts (REITs) have historically done well in periods of not just rising rates but also higher inflation, both of which are typically associated with economic growth.

This, in turn, implies greater occupancy rates. Property owners have also demonstrated strong pricing power and, as we all know, aren't shy about increasing rents.

I believe real estate's key appeal right now is that it's a real asset, the same as commodities, metals, gold and other materials, which also saw positive flows in the last two weeks of 2021. You may not know this, but the US is shockingly financialized, with financial assets at roughly six times the size of the economy.

The size of the Fed's balance sheet, as I said, has ballooned to an unheard-of $9 trillion, and if you include the assets of the central banks of the European Union (EU), China and Japan, you're looking at a combined $31 trillion as of the end of 2021. 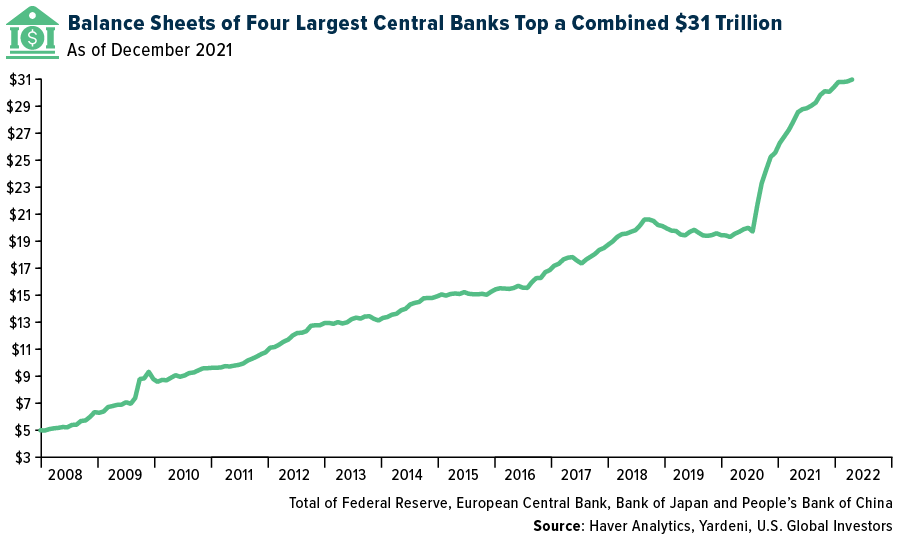 Taking all of this into account, I think it's only prudent to have some exposure to real assets, which have inherent value outside of the traditional financial system. That's especially the case now on the eve of rate hikes.

In full disclosure, commodities experienced net outflows of $4.2 billion during calendar year 2021. Among the biggest asset-losing ETFs of the year were the bullion-backed SPDR Gold Trust (GLD), which lost $10.8 billion, and the United States Oil Fund LP (USO), which lost $2.8 billion.

But with inflation looking a lot stickier than expected, and with infrastructure projects around the country set to begin thanks to the $1.2 trillion Bipartisan Infrastructure Law, I believe 2022 will bring a reversal of fortune for commodity and metals funds. If it's any indication, investors on January 22 moved $1.63 billion into GLD, marking the ETF's biggest one-day haul in its approximately 18-year history.

It's a smart move. Gold has historically performed well in times of not only higher inflation but also rising rates, according to the World Gold Council (WGC). If we look at the past four Fed tightening cycles, between February 1994 and December 2015, the yellow metal underperformed in the months leading up to the Fed's first rate hike but then outperformed US stocks and the Dollar six months and one year following liftoff. 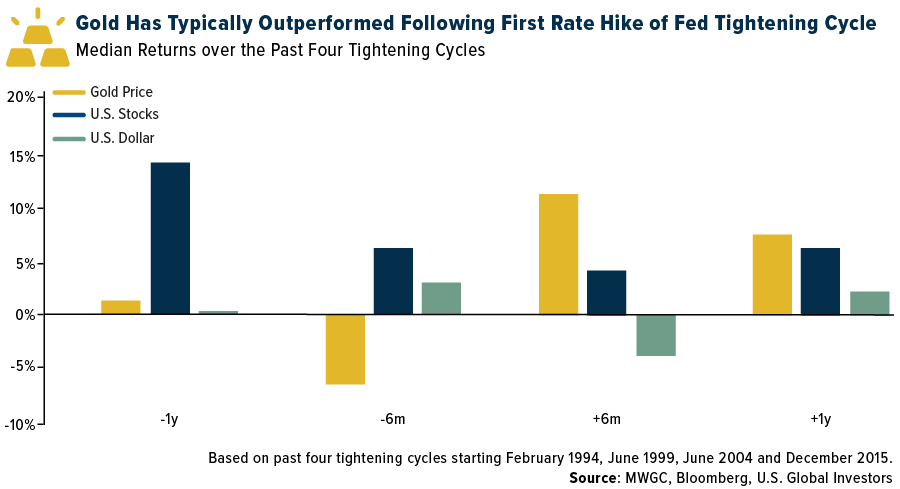 The reason for this? The WGC believes a weaker greenback may have given a boost to gold, for one. And two, US stock returns were not as strong as they were before the rate hike, which may have also favored gold as a safe haven.

This would suggest that the time to buy may be now, potentially less than two months before the Fed says it will take action. As always, I recommend a 10% weighting in gold, with 5% in physical bullion and 5% in high-quality gold mining stocks, mutual funds and ETFs. I also think an allocation of around 2% in Bitcoin, or "digital gold," also makes sense, especially now with its price still significantly discounted from its all-time high.