END_OF_DOCUMENT_TOKEN_TO_BE_REPLACED

The force is not strong with a lot of inexperienced money managers...

UP TO ONE THIRD of money managers working today are more likely to have attended a midnight screening of the last Star Wars movie than experienced rising interest rates, says Frank Holmes on his Frank Talk blog for US Global Investors.

The biggest movie at the time was Adam Sandler's "Click", the hottest song Shakira's "Hips Don't Lie". The best-performing S&P 500 index stock for the month was C.H.Robinson Worldwide. And as for Janet Yellen, she was president of the Federal Reserve Bank of San Francisco.

If June 2006 doesn't seem that long ago, consider this: Up to a third of asset managers working today have never experienced a rate hike professionally.

Last Wednesday, chair Yellen announced that, for the first time in seven years, easy money will become slightly less easy. The target rate will be set at between 0.25 and 0.50%, which doesn't sound like much, but it's important that the Fed ease into this cycle cautiously and gradually. Plus, this comes at a time when fellow industrialized nations and economic areas around the globe are considering further monetary easing measures.

Rising rates, of course, have a noticeable effect on mortgages, car loans and other forms of credit. Savers will finally start earning interest again.

The question on investors' minds, though, is what effect they might have on their investments. After all, the last couple of days have been challenging for stocks, with the S&P 500 dropping 1.5% last Friday alone. Is the Fed decision to blame?

To answer this, CLSA analyzed what happened to the US Dollar and stocks in the S&P 500 Index 60 trading days before and after the initial rate hike in past cycles and then calculated the averages. It's important to keep in mind that, aside from rising interest rates, a multitude of unique factors – from geopolitics to economic conditions to the weather – played roles in influencing the outcomes. Nevertheless, CLSA's research is instructive.

The group finds that, on average, the US Dollar peaked 10 trading days before the rate hike, and then afterward slid lower for four to five weeks. This created an agreeable climate for gold and other precious metals and commodities, as their prices typically share an inverse relationship with the Dollar. 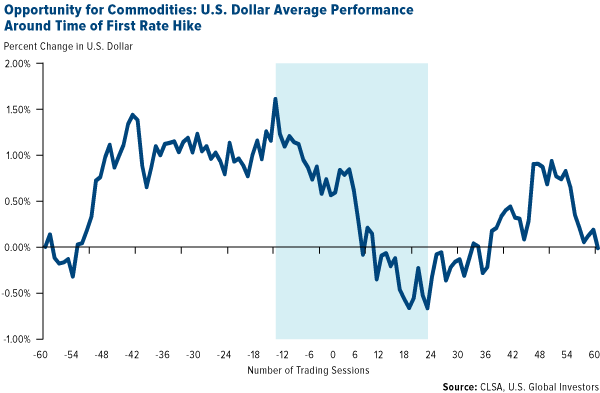 As for equities, they traded up for 60 trading days following the initial rate hike, 70% of the time. 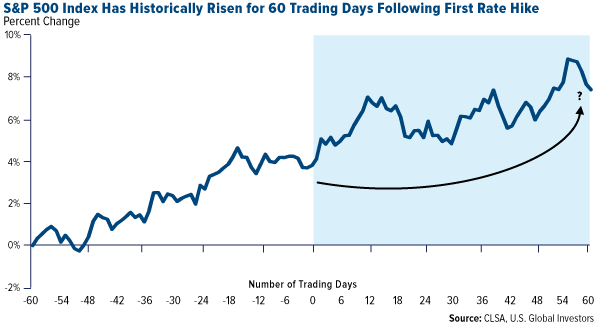 But CLSA's analysis looks only at possible near-term scenarios. What about the long-term?

In the past, the results were just as reassuring – most of the time. Barron's records S&P 500 returns 250 and 500 days following the initial rate hike in six monetary tightening cycles going back to 1983. The findings suggest that the market went through an adjustment period, with average returns falling from 14% before the rate hike to 2.6% 250 days afterward. But by 500 days, returns returned to their pre-hike average of around 14%. 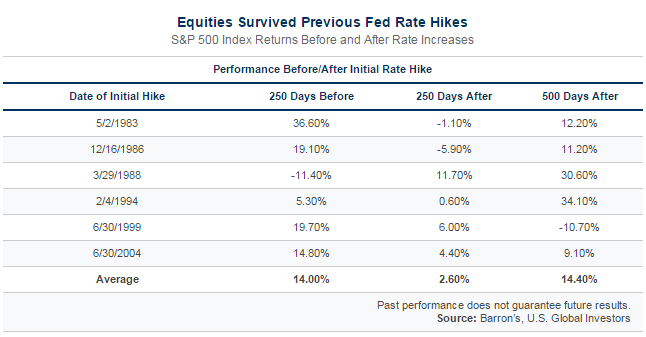 Again, many other factors besides interest rates contributed to market behavior in each instance. And this time is especially different, as the market was given an unusually long runway, allowing it to price in the full effects of the liftoff before it finally happened.

I can't say whether the same trajectory will be taken this time as before, but what CLSA, Barron's and others have found should be encouraging news for commodities and stocks.

The consumer price index came out this week and, with an inflation rate of 2%, the 5-year Treasury yield is now negative. (The real interest rate is what you get after subtracting inflation from the 5-year government bond.) This bodes well for gold. Also, the 10-year bond yield is lower than it was six months ago.

In 2008, the Fed trimmed rates to historically-low levels in response to the worst financial crisis since the 1930s. Most people would agree that this helped put the brakes on the US slipping further into recession.

But low rates were also partially responsible for driving many investors into riskier investments over the last few years – corporate junk bonds among them – as they sought higher yields.

Junk bonds, or high-yield bonds, are known as such because they have some of the lowest ratings from agencies such as Moody's and Standard & Poor's. Because they carry a higher default risk than investment-grade bonds, they offer higher yields.

But with corporate default rates nearing 3% for the year, and at least one large high-yield bond fund cutting off all redemptions, investors are facing liquidity problems and learning the hard way why these equities are commonly called "junk."

The week before last, it was announced that a high-yield bond fund – whose assets under management were worth $2.5 billion as recently as 2013 – would be closing after suffering nearly $1 billion in outflows this year. This sent the junk bond market into panic mode, with several similar funds experiencing near-record outflows. Fears intensified when legendary investor Carl Icahn tweeted: "Unfortunately I believe the meltdown in High Yield is just beginning." 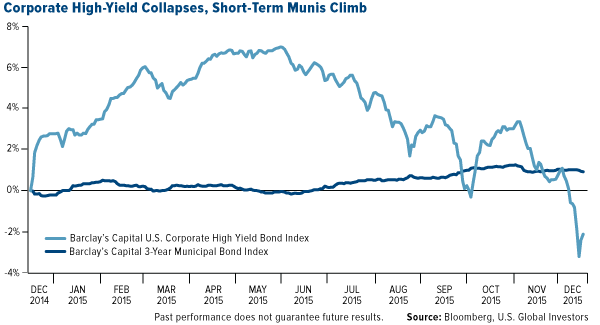 Energy companies, highly leveraged since oil began to spill value in the summer of 2014, top the default list for the year. JPMorgan estimates that the industry's overall default rate might hit 10% next year.

But where, exactly, is "elsewhere"?

With rates now on the rise, many investors have turned to investment-grade, short-term municipal bonds, which have seen inflows at the fastest pace since January. 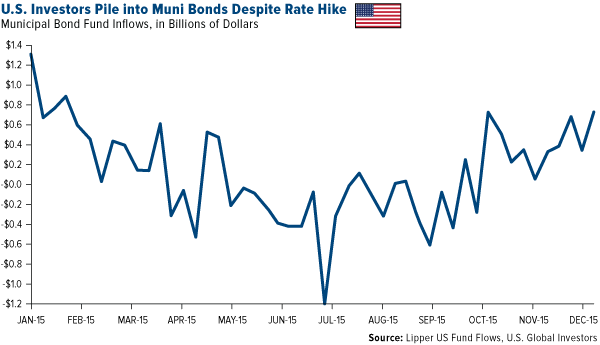 "As municipal bonds head toward the strongest returns in the US fixed-income markets this year, investors say the end of near-zero interest rates will do little to knock state- and local-government debt off its stride," Bloomberg writes.

Over the past seven years, low rates certainly contributed to one of the strongest bull markets in US history. Now that easy money is coming to an end, we can expect to see more volatility. But as the CLSA and Barron's data show, there's still plenty of room for growth.

It's important, therefore, to stay diversified. Focus on high-quality, dividend-paying stocks; investment-grade, short-term municipal bonds; and, as always, gold – some 5% in gold stocks, the other 5% in bullion.