END_OF_DOCUMENT_TOKEN_TO_BE_REPLACED

Analysts for the proper, if stodgy, British bank Standard Chartered announced this week they are expecting the Gold Price to reach $2,107 an ounce by 2014.

What's more, they say, "our modeling suggests a possible 'super-bull' scenario," based on a "powerful relationship" between per capita income in Asian emerging markets and the Gold Price.

Standard Chartered estimates that per capita income in China and India will reach 30% of the US level over the next 20 years. On that basis, the bank sees "Gold Prices rallying up to $4869 per ounce by 2020, should current relationships between Asian demand and gold persist."

Standard Chartered wouldn't find much argument from US Global Investors chief and Vancouver alum Frank Holmes, who was the lunchtime keynote presenter here in Zurich today at the European Gold Forum.

For starters, he furnished visual evidence to back up Marc Faber's claim in this space on Monday that gold is not in a bubble. 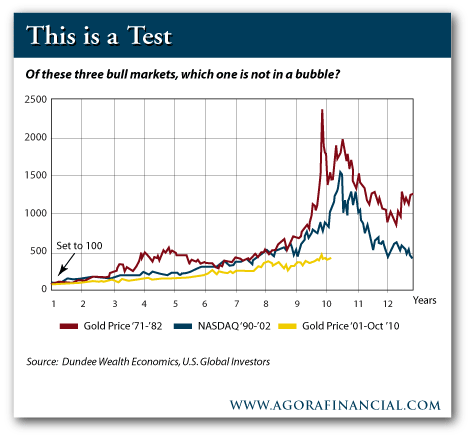 "Bubbles require massive leverage," Frank says, and there's no evidence investors are borrowing to load up on gold.

For now, gold demand will increase steadily, driven by two of Frank's favorite themes – the "fear trade" and the "love trade".

That is, investors Buy Gold because they fear what the Federal Reserve is doing with its balance sheet… 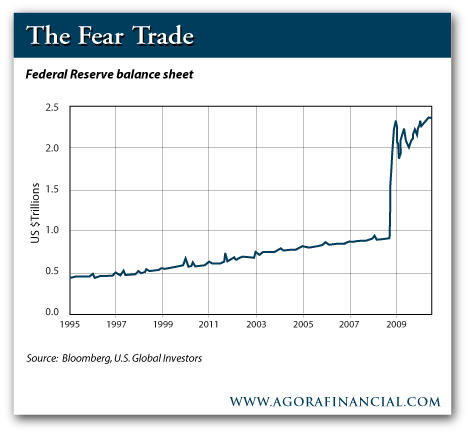 "Whenever you have negative real interest rates coupled with increased deficit spending," says Frank, "gold tends to rise in that country's currency."

Likewise, the two party blockade on fiscal reform writ large in the US Congress.

The "love trade", on the other hand, is something alien to North Americans and Europeans. "It is customary in most emerging countries to give gold as a gift to friends and relatives for birthdays, weddings, and to celebrate religious holidays," he explains. 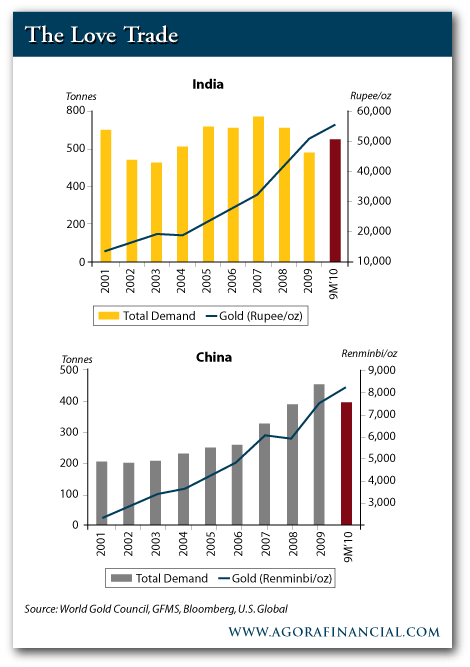 Thus, the point to which Standard Chartered agrees: As incomes rise in China and India, jewelry demand is driving the "love trade".

Gold Bullion demand in India during the first three quarters of 2010 exceeded all of the previous year. And China was on a pace to exceed the 2009 figures as well… all of that despite a steadily rising Gold Price all last year.