END_OF_DOCUMENT_TOKEN_TO_BE_REPLACED

FIRST, let's take the 'Gold as Inflation Hedge' canard, writes Gary Tanashian in his Notes from the Rabbit Hole.

On the one hand you have the sons of Harvey & Erb, who called gold to $800 per ounce. and caused a stir in the gold "community".

"Gold is just too volatile," they say, to be an effective inflation hedge.

Well yes sir, you are right. Gold does not track inflation in any kind of a convenient time frame. Gold's volatility is a reflection of the volatility of the assets orbiting around it in the constellation of risk.

This cool NASA illustration makes the point. Those planets – like equities, commodities and the various FrankenVestments concocted by Wall Street – are in motion. All is often fine, but when a meteor of risk discovery hits one of them well, it is suddenly marked down vs. gold.

In another metaphor, gold has no price objectives or risk on its own. Gold is an anchor in the sea bed.

Its perceived volatility is based on whether the waters above (risk assets) are calm or choppy. Calm seas will surely impair gold's assigned value (price) and rough waters will mark up that value as the herd seeks...calm.

Enough with the Harvey & Erb "Golden Dilemma" that caused such an uproar among gold bugs. Although over the very long-term gold certainly has protected against inflation, its volatility along the way is driven by other forces.

On the other hand we have the usual suspects, as noted in a couple of recent posts, always taking things too far in the other direction.

Let's call is the Armageddon pitch.

If you thought gold to $5,000 might be a bit of a stretch in your lifetime well sir, why don't you just reevaluate and plan on six figures per ounce?

These well known gold 'analysts' cite or have cited (some alter their stories after history has proven them wrong) canards like Peak Oil, a Venezuela-like hyperinflation, and a coming financial system 'reset' as reasons to buy gold.

As wrong-headed as they have been since 2011 they are actually barking up a better tree than ole' Harvey & Erb, with their inflation non-issue.

But please; gold is the sun. Gold is an anchor. When the bubble bursts gold will be insurance for those who decided to keep a slug of it in storage somewhere. One day it will probably be marked way up value-wise, because frightened, emotional herds are hard to stop when they get on a stampede.

The problem however, is that a portion of the gold "community" is not as pure as it may think it is. A golden casino patron is worse than a regular casino patron because at least the latter knows he's a gambler. All too many gold bugs are in it for the coin, and the gurus who tend them are all too happy to give them targets for that coin.

How's that game of self delusion been working out for the last 6+ years guys?

I realize my articles calling b/s on a portion of the gold "community" and refusing to hype gold as more than it is tend to minimize my ability to sell my services to said community. But that's the price you are going to pay when you promote the truth (as you see it) vs. promoting whatever the hell analytical spaghetti seems to stick to the wall the best at any given time (China/India Love Trades, Western Fear Trades, Inflationary economic growth, Venezuela/Zimbabwe/Weimar-esque el Hyper, Ebola, War, Terror and on and on it goes...).

The note below was received from a reader (reprinted with permission). His website, Hill & Vaughn, is a precious metals company that caters to refugees from the biases and promotions as noted in the first two segments of this article.

"I wanted to write you and tell you thank you for the insightful commentary you provide. I find it very helpful.

"To give you some content as to why I find it helpful, I'll share some background. I'm a CFP who has worked in the industry for over 20 years. I also own a gold and silver brokerage firm that helps people make wise decisions about precious metals.

"I take a consultative approach and like you, I am not a gold bug. Rather, I'm a gold and market realist. I believe precious metals can provide an 'insurance' component for people but they aren't necessarily investment assets per se. Getting people to understand the place that the precious metals deserve is a balancing act as most people subscribe to either the 'sky is falling' camp or the 'worthless relic' camp.

"I'm trying to pull people to the center. I'm positive I'd make more money if I was to peddle fear but I sleep really well at night knowing I'm telling the truth about what metals will and won't do."

It's true. The Federal Reserve and its global central banking fellows have theoretically blown the system and blown an asset bubble of global proportions. That cannot be disputed because all you have to do to confirm it is look at central bank balance sheets bloated with trillions of Dollars worth of financial garbage that has been sucked up in order for global asset markets to not only function post-2008, but to become a collective bubble.

So I will leave you with one of my favorite charts, the monthly SPX/Gold ratio. It tells all you need to know about how bullish things are out there in the risk 'on' asset world and why adding gold as insurance to that might be a good idea at this time.

Yes, it's our macro Amigo #1 of our 3 Amigos, last updated in July. 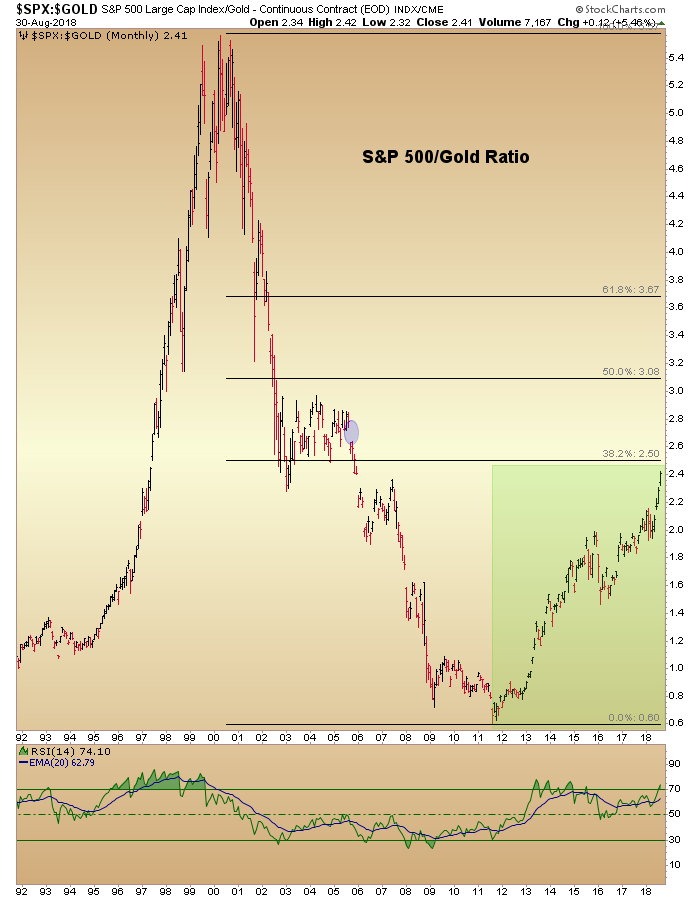 The chart tells us at least two things...

Since 2011 we have had a 'reset' alright; the macro has reset the relative fear and loathing for the risk 'on' world of the 2000-2011 time frame to a point that is becoming excessive, at least on an interim basis.

But man, that thing is still in motion and while I have handy targets close by, if you are on gold right now as a price play you are getting killed. This is where the promotions led you.
The chart is the very picture of a time when it could be considered wise to have insurance.

Remember that the best insurance is insurance you don't end up needing. But if you do need it, there it is...and you will have an anchor amid the waves, including the tidal kind.

The key is in your perspective, not gold's performance.