END_OF_DOCUMENT_TOKEN_TO_BE_REPLACED

Would you spot fake gold bars, coins or jewellery if it told you a sob story...?
A WELL-DRESSED motorist flags you down by the roadside, pleading hard luck, writes Adrian Ash at BullionVault.
Perhaps a woman and a couple of young kids are sitting in his car, itself a Mercedes or smart new people carrier, parked with the hazard lights flashing.
Your grateful new friend was dashing to visit his poor dying mother. Or to a crucial business meeting. Or to something else really urgent. But suddenly he is all out of petrol, and out of cash.
Here's his business card. What's your address? You'll soon get your money back. Look, as security, here's a piece of gold jewellery, the very ring off his finger...
You wouldn't fall for this scam, right?
I mean, the ring so clearly looks brass, and that necklace is just costume jewellery. Anyway, no one parts with the real thing for so much less than it's worth. As one reader of the Schleswiger Nachrichten puts it:

"Whoever thinks an honest man would give away his real golden Rolex for a canister of fuel is stupid!"

Yet when it matters, a surprising number of people do believe this trick, and all across Europe too.
Blame greed or stupidity (as plenty of newspaper reports do) if not the confusion which a practiced scammer can create in a suggestible target. This trick has been rehearsed and refined pretty much since West German car ownership jumped in the 1950s. It's become so widespread across Europe's richest nation that "Autobahngold" now means "fake gold". So does the more pointed "Rumänenblech" or "Romanian plate".
Just how common is this con? In Brandenburg alone more than 200 attempts in just 2 months were reported to the police in early 2010. Many more victims on top never admit to getting scammed. Another raft of stories and warnings hit national German media again 5 years later. Now in 2017 the latest twist to Autobahngold sees the crook show the victim a receipt, stating the purchase price from a well-known retailer. Because if you can't spot fake gold, then how about a fake receipt?
Perhaps because gold investment is more widespread in Germany, scammers have also started offering fake gold bars both to Autobahn victims and to shoppers in town centres.
Luckily there's a jeweller's just round the corner. Sadly, he'll just confirm you've been scammed!
The old "Did you drop this ring?" routine is back in the UK too, enticing shoppers in Leicester to buy fake gold jewellry at seemingly knockdown prices – a scam which in 2007 and then 2010 saw "hundreds of people hand over up to £40 for rings or chains made of copper or brass and [only] sprayed with gold paint," according to the city's Mercury.
Autobahngold has also returned to the UK after last making headlines in 2015. The sudden raft of 2017 reports may in fact mask a one-car crime-wave, with the same crooks heading across the Pennines from Chester...and then north from Yorkshire...to rip off motorists near Edinburgh...before racing south again to Peterborough...and onto the rich pickings around St.Albans and the M25 motorway.
Because gold is universally valued and desired, 'fake gold' scams are truly global too. Two teenagers in Bend, Oregon for instance just netted $50,000 selling fake Royal Canadian Mint and Perth Mint 1-ounce gold bars, according to local police.
"The teens were able to conceal their identities while reaching out to local residents interested in buying gold through Craigslist," says The Bend Bulletin, "but three people purchased the fake gold in person."
Busted only this February, the two 17-year olds apparently began their scam in July last year, if not before, shipping fake items bought online from China. The town of Bend in fact seems a hot-bed of criminal teen masterminds. In an "unrelated" case, other kids are accused of scamming local residents "with fake currency normally used in TV and movie productions."
Fake banknotes you might be able to spot, whether with experience, inky fingers or handy tips from your friendly central bank. But fake gold? The vast majority of people wouldn't know real gold from a forgery if it got up and bit them. Barely as many would know where to find an expert to help judge it for them.
Hence the scams outlined above. The risk of forgery explains why we have assay offices and hallmarks for jewellery. (Without them, buyers risk the low 60% purity unknowingly accepted on one estimate by Indian households, the world's heaviest and apparently savviest buyers). It also explains why the bullion coins and small gold bars industry is constantly adding new security features to assure authenticity.
Every bull market attracts fraudsters and scams, but the retail market in gold bullion can seem particularly vulnerable. A blurred line between real and representational is what makes the UK's everyday £1 coin gold-coloured after all. Yet amongst those copper, zinc and nickel discs, one in every 30 of the UK's current £1 coins are outright forgeries according to the Royal Mint, now forcing £100m refitting costs on the country's vending-machine industry for next week's launch of its new 12-sided replacement.
Chicken and egg perhaps, but maybe such estimates help breed acceptance, especially for a low-value unit sooner taken than studied, as in the example below. High-value physical gold demands closer inspection of course. But in contrast to the little gold-coloured lumps we call a quid, most private citizens have zero experience of handling gold bullion.
How would you know the difference? 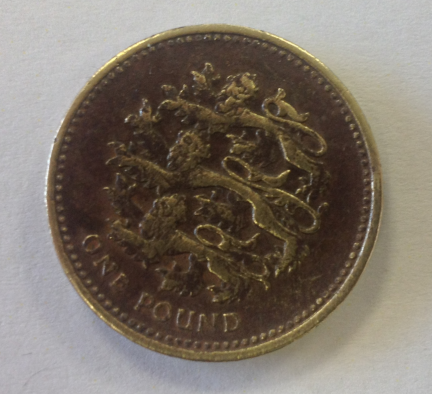 That's one reason why BullionVault and its users all trade and own bullion only in the form of Good Delivery bars., whether of to buy platinum, silver or gold Meeting the strict standards of the London Bullion Market Association (LBMA) and the London Platinum and Palladium Market (LPPM), these bars are how gold, silver and platinum are traded – wholesale – for end-use by jewellery and micro-chip fabricators, coin mints, autocat manufacturers, PV solar panel makers and dental suppliers the world over.
Any attempt at fraud would soon be uncovered, as these wholesale bars are melted and recast to become wedding bands, bracelets, bonding wire, smaller bullion bars or fillings for your teeth. And that would cost the issuing refinery its Good Delivery accreditation. Because in the professional market, each buyer knows who sold them a particular bar. So the "chain of integrity" leads from the current owner, via his/her seller, all the way back to the refiner, who is then ultimately liable for making good any problems.
Between refining and end-use, all Good Delivery bars must stay within accredited storage to retain full market value. Accredited custodians only take in bars from other accredited vaults, and metal only enters the system from accredited refiners. Even when they bear the correct bar stamps, large gold bars are not usually accepted from people outside the Good Delivery circuit, which is why taking a Good Delivery bar into private possession seriously dents its value. Any potential buyer, lacking the accredited storage history which ensures integrity, would rather deal accredited metal from an accredited source.
It's this warranty – that delivery is good – which makes the professional wholesale market so cost-efficient and liquid. The LBMA conducts further spot checks on the small group of refineries approved to produce Good Delivery bars. Here at BullionVault, we also send expert assayers into the vaults every year to check all the gold and silver bars, and they send their report to our independent financial auditors who publish it – on their website, which we couldn't hope to control – with their detailed study of our internal controls and award-winning Daily Audit process.
You can read the assayer's latest inspection report on our independent financial auditor's website here. As you'll see, they were 100% satisfied with every bar when they visited each of the vaults we use to care for client property to coincide with our 2016 financial audit.
If a bar ever turned out to be underweight or less fine than stated, it would be BullionVault's seller who would be liable for the loss. They in turn would go to their seller, and so on, back to the refiner. BullionVault users are never at risk either way. On top of that we guarantee every gram of BullionVault gold, silver and platinum ourselves.
So to recap, that's a guarantee of quality, for warranted-quality gold held in accredited storage and with a clear chain of ownership running back to the original manufacturer who stands ready to make good.
You can't get any further away from the roadside scam of Autobahngold.