END_OF_DOCUMENT_TOKEN_TO_BE_REPLACED

Has the whole system descended into farce and fraud...?

SO IT SEEMS that social networking site Facebook may go public this week. This is important, writes Dan Denning, editor of the Daily Reckoning Australia.

Facebook has 800 million users (who pay nothing). The fact that the company is ready to sell shares to the public and Wall Street is underwriting for the initial public offering (IPO) can only mean one thing: the age of superficial communication devoid of real content and real meaning may be peaking...as soon as tomorrow!

We'll get to how Facebook diminishes the quality of your thought in a moment. But first, Mark Zuckerberg is about to find out that in order to cash in you have to reveal. The upside of an IPO is that your equity in a private enterprise is now liquid and usually trades at a much higher value than what you paid for it. That's the good news.

The downside of becoming a public company is increased transparency. Your shareholders know how you make your money and how you spend it. The public can see where you generate your revenue and how (or if) your business model works.

CNBC's Jim Cramer reckons Facebook is a buy with a market value of $70 billion but a sell if it goes public at $110 billion. Bless him. IPOs like this can only happen when the public has an appetite for growth stories. But the stories can't be too detailed. That would get in the way of an accurate valuation. IPOs are about the future. And you can't put a price on that, can you?

The image below (ironically captured from a friend's Facebook page) shows this tension between how Facebook is perceived and what is really going on under the hood. Facebook is valuable as long as users pour their time and information into it. The data you generate as a user is what's making Zuckerberg rich (and good on him, by the way).

Data broker of the year vs. terrorist 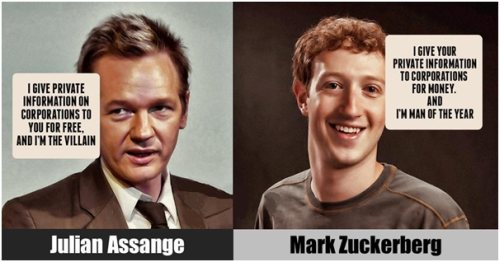 We bring up the Facebook IPO because we warned about it last year. In June of last year, Pandora, another Internet darling, went public. So did Glencore, the Swiss-based commodities trader. We argued that IPOs are a sign of a market top. We wrote the following:

Has the coordinated reflation of stock markets by central banks since Lehman Brothers collapsed in 2008 actually been a giant pump-and-dump exercise? Were QEI and QEII like mini-IPOS for the stock market in general, a kind of re-selling and rebranding of stocks as an asset class?

Here's an argument: The insiders – mostly financial institutions – have used their control over monetary policy to flood the market with cheap bank reserves. Those excess reserves have been put to use in financial markets to run up stock, bond, and commodity prices and generate trading profits for banks and investment houses. The upward momentum in markets (more or less) has given anyone who can see the writing on the wall a chance to liquidate their positions into a stable market and leave the shareholding public with all the risk.

Nefarious? Paranoid? Conspiratorial? Or just the same as it ever was?

It's not much different than the exercise Jesse Livermore described in Reminiscences of a Stock Operator. If you're a large seller wishing to liquidate a position (the Money Power wishing to sell the assets it bought with credit it created, at no cost, for a high price) the first thing you do is become a buyer and create some buying momentum in the stock.

Once the public begins to bank on that momentum and get back in the market with conviction, you can liquidate your position into a rising trend. Then, when the public is all in and you're all out and the Fed is set to exit the market and Greece is set to crack, you're in the perfect position to buy up all the good assets cheap, after the crash, when there are no other buyers to compete with and the streets are littered with globs of yogurt and broken bottles and shattered middle-class dreams.

Are we at the big moment now, where the wealth transfer is accomplished? As we've said all along, the Fed needs a proper stock market crash to justify another round of asset purchases. That could mean even steeper stock falls. What will follow is an even more aggressive monetisation of government debt-or outright default.

How will you know when the whole system has descended into farce and fraud? Look for the Facebook IPO.

And so here we are, eight months later. Greece is still cracking. The Fed has committed to keeping US interest rates low until the end of 2014. Central banks are expanding their balance sheets. This could inject lots of low-cost money into the stock market and risk assets to keep financial asset prices from collapsing. Into this wave of confidence in stocks, Facebook goes public.

In point of fact, the Australian All Ordinaries index is down about 5% since we wrote that article last June. The S&P 500 is up 3.5% over the same time. Of course, an Aussie-Dollar-based investor would have done far worse in real terms buying US stocks because of the strong Australian Dollar over the same period.

We'll have to wait and see whether the Facebook IPO takes on any historical significance. Is it really the high-water mark for the age of superficial communication? Are we being too hard on it? After all, what's wrong with people sharing inspirational sayings or taking pictures of their food for the rest of us to see? There's nothing sinister in it.

But it IS telling that the biggest American business success story of 2012 – at least in IPO terms – could be a company that doesn't really make anything. It sells data. And that data is only valuable as long as you continue to consume, or as long as the world's growth is driven by consumption. When you look at it that way, it DOES seem like a high-water mark for the age of credit-driven growth.

There is a more interesting angle here. Facebook isn't all fun and games. Our growing belief is that the human central nervous system is not evolved to survive when bombarded by so much useless, time-consuming news and information. And we're referring to the whole world of online and mobile information, of which Facebook is just the most visible example.

This kind of mediation of reality could be making everyone crazy, or at the very least, uninteresting to talk to. The neurochemistry of the human brain is pretty sophisticated. But it evolved for a world where the kind of information we processed didn't change for tens of thousands of years.

The human brain produces cortisol to heighten focus during stressful situations, like being hunted by a tiger. The brain alters its own chemistry so that we can concentrate on the immediate threat. But over time, heightened stress levels impair other cognitive functions and may even affect our memory. A brain under constant life/death/threat pressure is not a healthy brain.

In fact, human beings can only operate under highly stressful conditions for a limited period of time before we're physically and mentally exhausted. Cortisol is a stimulant to promote survival in life or death situations. But like anything, too much of it over time is not good.

Besides, operating at maximum stress all the time would prevent us from doing other things with our frontal lobes, like developing speech, inventing the steam engine, serenading Juliet on her balcony, painting the Sistine chapel, or curing polio.

In other words, it would be a colossal disappointment for our species, in evolutionary terms, if information overload – with its constant stream of mostly superfluous but mildly stressful news items – degraded our cognitive capacity over time.

What if the Internet is making us dumber?

At the very least, processing a large quantity of mostly irrelevant (non-threatening)information occupies more of our conscious thought and time than it used to. We have less time to think deeply about things. If we fall into bad habits, we spend more time watching videos or responding to stimuli of an unimportant nature.

On the plus side, at least tigers aren't chasing us. The Apex Predator in the human ecosystem is now the State, not the lion, tiger, or bear. And there are some amazing, collaborative things that are only possible on the Internet.

But at the worst, if we persist with our modern way of gadget-mediated living, it's possible we're actually reprogramming/adapting our brain to operate in a world of information overload. This probably does not promote our survival as a species.

Your best survival strategy? Turn off the wi-fi, shut off the ringer on your phone, pick up a book or go for a run. Time is your most valuable asset. And it's the one asset we all have equal amounts of. How we use it is what distinguishes us from one another. We'll need other survival skills in the 21st century, and they won't include writing a clever status update on Facebook.