END_OF_DOCUMENT_TOKEN_TO_BE_REPLACED

What the FAANGs giveth...

The Cluetrain Manifesto was a modern day reworking of Martin Luther's 95 Theses – the pamphlet which, nailed to the door of the church at Wittenberg, is credited as having triggered the Reformation.

From the vantage point of 2018, the impact of the internet on all facets of our culture and economic life is obvious. Back in the 1990s, it was not that clear. It certainly wasn't that clear to economist and Nobel Memorial Prizewinner Paul Krugman, who in 1998 wrote that

"The growth of the internet will slow drastically, as the flaw in 'Metcalfe's law' – which states that the number of potential connections in a network is proportional to the square of the number of participants – becomes apparent: most people have nothing to say to each other!

"By 2005 or so, it will become clear that the internet's impact on the economy has been no greater than the fax machine's."

Some of Cluetrain's theses were:

Markets are conversations.
The internet is enabling conversations among human beings that were simply not possible in the era of mass media.
Hyperlinks subvert hierarchy.
People in networked markets have figured out that they get far better information and support from one another than from vendors. So much for corporate rhetoric about adding value to commoditized products.

It seems almost facile to point out that one way in which the internet has changed the rules of business-as-usual is its facility at enabling start-ups to become fully fledged global businesses practically overnight.

Amazon was only founded in 1994; Netflix in 1997; Google in 1998; Facebook in 2004; Twitter in 2006. The internet isn't just enabling conversations that weren't possible in a pre-internet age, it's enabling entirely new types of businesses to scale far faster, and to a far greater extent, than was ever previously achievable, with relatively modest need for capital.

So in some respects the shares of the so-called FAANGs always deserved to trade at a premium to 'old world' businesses without the capacity to benefit from the growth of the digital, networked economy in the same way.

The only question was how much of a premium was warranted.

As Charlie Bilello points out below, 'momentum' stocks in the US market are now coming under some pressure, while 'value' stocks – out of favour for a considerable length of time – are finally showing some signs of strength: 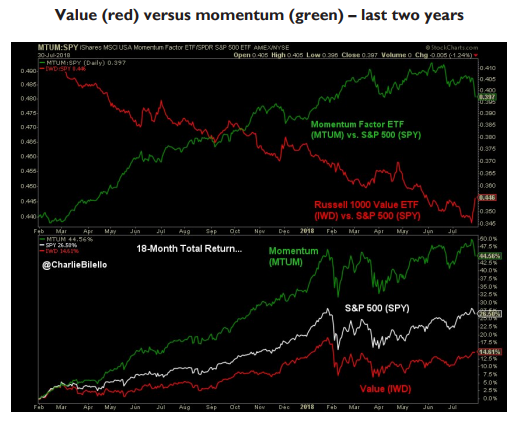 In their strategy piece of January 2017 (How Not to Get Fired with Smart Beta Investing),
Research Affiliates crunched the data on US stock returns over a period of 50 years. The results are shown below. 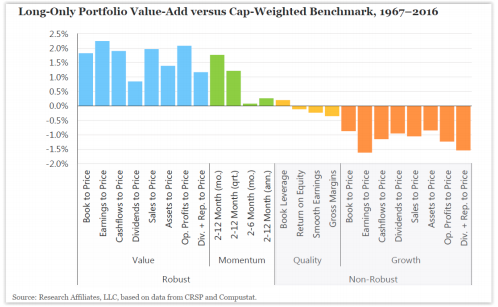 Over the period in question, 'value' and 'momentum' both added value by comparison to the benchmark; 'quality' and 'growth' both destroyed value by comparison to the benchmark. But the first three-fifths of that period may no longer be statistically useful, in light of the widespread adoption of the internet from the mid-1990s onwards, and its subsequently proven ability to create brand new types of businesses with revolutionary growth and revenue prospects.

But even an internet tree doesn't grow to the sky. On the basis of share price returns, investors have been justified, to date, in buying the so-called FAANGs – but they were never justified in paying literally any price for the privilege.

Nor were those fund managers cheerfully loading up the truck with them justified in building a position of literally any size within their funds. There is such a thing as prudent risk management even when it comes to high growth internet stocks, and appropriate position sizing is a component of it.

Clearly it's easier to cast caution to the winds when you're an economic agent with next to no skin in the game, playing with other people's money.

The journalist Max Read reiterates something that has been obvious for at least the past two years – Facebook (by way of example) is running out of humans:

"Back-of-the-envelope math on internet usage and demographic statistics tells us that there are around 25 million Canadians and 250 million Americans on the internet who are old enough to use Facebook, giving us a total of about 275 million total people who are eligible Facebook users in those two countries.

"Facebook says it has 241 million monthly active users in the US and Canada, meaning that there are only around 33 million people in those two countries who could be Facebook users but aren't. Put another way, about 87% of Americans and Canadians who have the ability to use Facebook do.

"That's not a huge surprise to people who've been watching Facebook's user base expand. But as American and Canadian growth has slowed, somewhat, global growth has made up for it. The statistics on global internet access are somewhat less reliable, and therefore the picture is a bit fuzzier, but it's very possible that Facebook is running up against the same problem there, too.

"It gets very fuzzy here, since we don't know how many of those 3.25 billion people are under the age of 13 and therefore ineligible for Facebook. If we say all of them are able to use Facebook, that means around 65% of possible Facebook users already use the service every month.

"That's already a stunning figure, but if we get a little wilder, and assume that a little less than a quarter of those 3.25 billion people are below Facebook's minimum age of 13, we're left with something like 2.5 billion people on the planet who can practically and legally access Facebook. According to Facebook, all the company's apps in total – Facebook, Instagram, WhatsApp, and Messenger – have 2.5 billion unique users every month. Which means it's well within the realm of possibility that we're living in a world where every single person who can possibly use an app owned by Facebook already does."

But our point wasn't expressly to dump on Facebook. Rather, it was to gently suggest that the cult of the FAANGs and the 1960s and 1970s cult of the 'Nifty Fifty' seem, in behavioural terms, to be more or less identical.

A crude acronym is not an investment policy. Nor is buying undeniably high growth stocks without any regard for their valuation. We leave that to ETF providers and to other fund managers. In any event, some mid-year fund factsheets are going to make for interesting reading.