END_OF_DOCUMENT_TOKEN_TO_BE_REPLACED

Gold & silver only got a reprieve, however, not a pardon...
The PRECIOUS metals sector has held recent lows and a rebound is underway, writes Jordan Roy-Byrne in TheDailyGold.
Gold held $1080 per ounce for three straight weeks and pushed as high as $1126 per ounce last week. The gold miners (as measured by the GDX and GDXJ index tracking ETFs) surged the first half of last week and silver also gained. But we believe that this move is more likely to be a relief rally before gold ultimately tests $1000 per ounce rather than the start of a new bull market.
Gold's weekly candle chart is posted below and at the bottom it includes the net speculative position in gold. Over the past two weeks gold's net speculative position in US futures contracts was the lowest in 14 years. Yet gold pushed through $1100 per ounce last week after forming hammers during each of the prior three weeks.
The near-term upside target remains $1140-$1150 per ounce while near term support is $1100 per ounce. 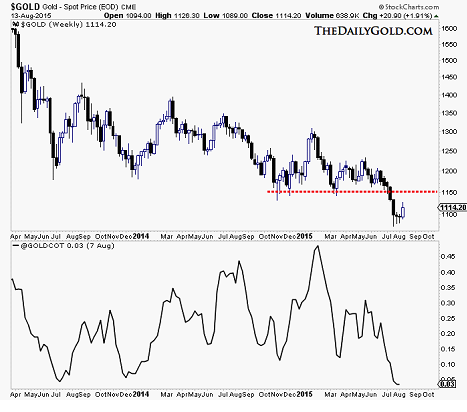 The gold miners surged at the start of last week. Through Wednesday GDX gained 14% while GDXJ gained 17%. Despite Thursday's sharp reversal, the miners have further near term upside potential. If this rebound has legs then look for GDXJ to test $23-$24 and GDX to test $17 in my view. 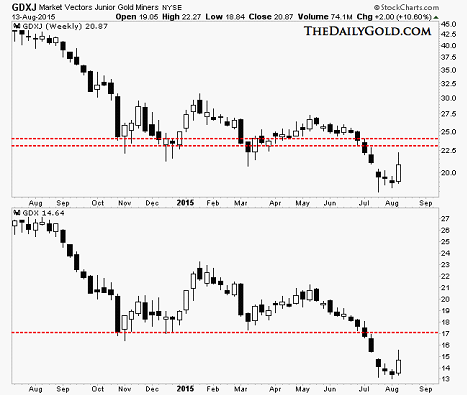 In recent weeks and months we have posted a handful of charts showing how cheap and depressed the gold miners are. We have a new one to share. Using the Barron's Gold Mining Index (BGMI) we see that gold stocks relative to the S&P 500 (as of early August) were trading within 2% of the all-time low in 2000. This could be a major double bottom. 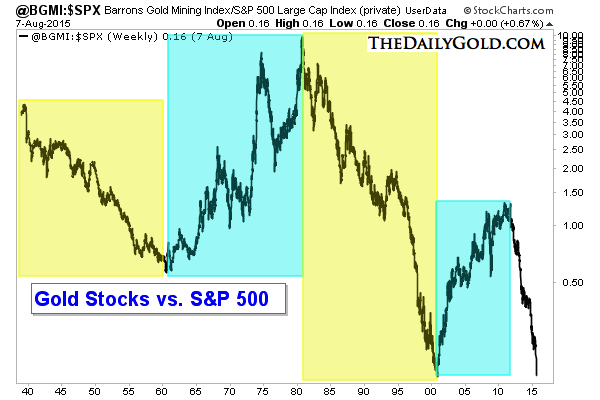 We believe the bear market is not quite over, as we think gold prices could test $1000 per ounce. But there is an important distinction to make. As of last week the ratio of gold-mining-stocks to gold bullion was also trading at all-time lows. The gold stocks are not just extremely oversold but historically oversold. The BGMI as of last week was trading at a 13-year low and at the same level as 42 years ago!
Simply put, gold is nowhere near as oversold as the gold mining stocks. Therefore it is possible the gold stocks could bottom before gold. Recall, this happened during the 2000-2001 lows.
That being said, we will keep all scenarios open and trade accordingly. Be aware of the risk of a gold reversal at $1140 to $1150 and the risk of a future test $1000 per ounce. At the same time, consider the historic oversold condition in the gold stocks. I would not be surprised to see the juniors (GDXJ, GLDX) start outperforming gold before the metal finally bottoms.
As we navigate the end of this bear market, consider learning more about our premium service including our favorite junior miners which we expect to outperform in the second half of 2015.