END_OF_DOCUMENT_TOKEN_TO_BE_REPLACED

You're living through the craziest time for centra-bank policy...

You know we're living through a gigantic "global monetary experiment".

This has warped prices of nearly everything. US stocks, commercial real estate, and art prices have all climbed to record highs.

In December, the Federal Reserve raised its key interest rate for the first time in years. Many in the mainstream media called it the end of easy money. Interest rates are still extremely low. You can see in the chart below that the rate hike was tiny: 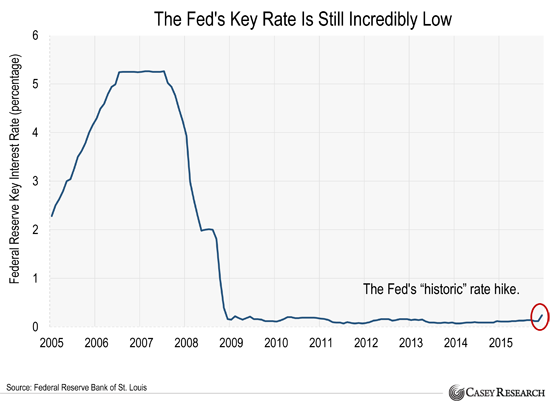 Although the rate hike was tiny, global stock markets couldn't handle it. US stocks were in a strong bull market from March 2009 through December 2014, gaining 204%. However, since the Fed raised rates on December 16, the S&P 500 has dropped 6.4%.

Foreign stocks have also fallen. The Stoxx Europe 600, which tracks 600 of Europe's largest stocks, has dropped 5.4% since December 16. The Japanese Nikkei has dropped 8% in the same period.

If markets were healthy, a tiny rate hike would not cause them to fall apart. Global financial markets are addicted to easy money.

"Central banks around the world are going to new lengths to boost their economies, underscoring both the importance and limits of monetary policy in a global economy plagued by paltry growth and unsettled markets."

The BoJ lowered its key rate to -0.1%. It's the first time in history Japan has seen negative rates.
The idea of negative interest rates sounds bizarre to most people. After all, the whole point of lending money is to earn interest.

This is the Japanese government's latest scheme to jump-start the economy. The Bank of Japan has pumped hundreds of trillions of yen into its financial system in the last couple years. The flood of new money helped goose Japanese stock prices for a while. From December 2012 to August 2015, the Nikkei surged 120%.

However, Japan's easy money scheme hasn't helped the "real" economy at all. Japan has slipped into a recession three times since 2010. And Japan's currency, the yen, has lost 36% of its value against the US Dollar since 2012.

According to The Wall Street Journal, countries that account for 23% of world economic output have negative interest rates.

China is the world's second largest economy. Last year, it grew at its slowest pace since 1990. Brazil, the world's eighth biggest economy, is going through its worst economic downturn since the 1930s. Canada slipped into a recession last year.

Meanwhile, the US economy has grown just 2.2% annually since the financial crisis ended in 2009...well below its historical average growth rate.

The company's sales dropped 23% last quarter. It recorded a net loss of $87 million for the quarter...after making a $757 million profit during the fourth quarter of 2014.

Caterpillar's sales dropped in December for the 37th month in a row. Caterpillar's stock has dropped 31% over the past two years to its lowest level since 2010.

Near-zero interest rates are failing to stimulate the economy. We expect more governments to adopt negative rates. After all, making "easy money" even easier is the only way governments know how to fight a slowing economy.

And keep in mind this is all a gigantic experiment...

Central banks have never used negative interest rates before. No one knows how this will end. It's very likely these reckless policies will blow up the financial markets.

That's why we recommend taking two important steps to protect your money...

One: Own physical gold. Unlike stocks, bonds, or cash, it's the only financial asset that has value no matter what happens to the financial system.

Two: Put some of your wealth outside the "blast radius" of a financial crisis. We wrote a new book with all of our best advice on how to do this.  Claim your copy here...