END_OF_DOCUMENT_TOKEN_TO_BE_REPLACED

Protectionism will surely hurt the most expensive of expensive stocks...

ECONOMISTS don't necessarily agree on many things, writes Tim Price on his ThePriceOfEverything blog, but there is almost universal acceptance that the imposition of trade tariffs worsened the Great Depression.

So it is difficult to square the 'America First' language of President Trump's inauguration speech with a rosy outlook for businesses that have hitherto been the beneficiaries of globalisation. Talk is cheap, of course, but the intention seems clear:

"Every decision on trade, on taxes, on immigration, on foreign affairs will be made to benefit American workers and American families."

The very next word in the speech was 'Protection' – but it might as well have been 'Protectionism'.

Many have made comparisons between the aspirations of the Trump administration and the economic philosophy of the Reagan presidency. But the financial market environment could hardly be more different.

And between 1965 and 1981 the S&P 500 index recorded no net gain in price whilst incurring a drawdown of nearly 50% in 1973 and 1974. By the time Ronald Reagan was elected, investor sentiment was extremely negative. The Reagan presidency sparked an 18 year bull market. The Trump presidency, on the other hand, begins during one of the longest stock market rallies in history, and at a period when market valuations are close to their all-time highs. 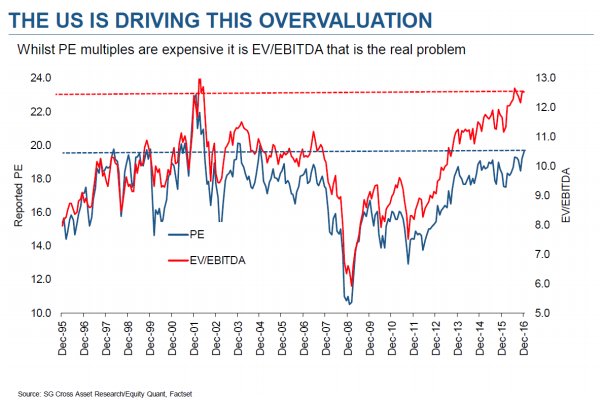 They also point out the significant divergence between price / book ratios across the US,
Europe and Japan: 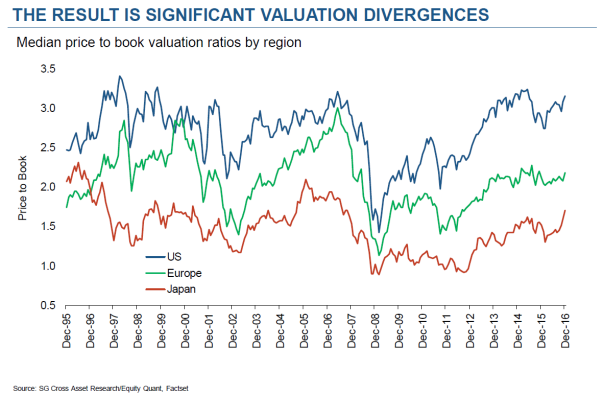 Price / book is a particularly instructive ratio. When James O'Shaughnessy conducted an analysis of the investment strategies that were least successful in the US stock market for a period of over 50 years, paying a high price / book ratio for the market was one of them.

O'Shaughnessy scoured the entire market and selected the most expensive 50 stocks by price / book. He then reweighted that 50 stock portfolio each year to ensure that it remained expensive over time. Starting with $10,000 the high price / book portfolio ended, after 52 years, being worth $267,147.

Which sounds like a respectable outcome, until you see how much you could have earned by selecting a portfolio of the lowest price / book stocks instead – one of the most successful strategies. There, a starting valuation of $10,000 would have ended, after 52 years, being worth over $22,000,000.

Paying over the odds by way of p/e is similarly damaging to performance over the long run, just as favouring low p/e stocks is tremendously profitable. 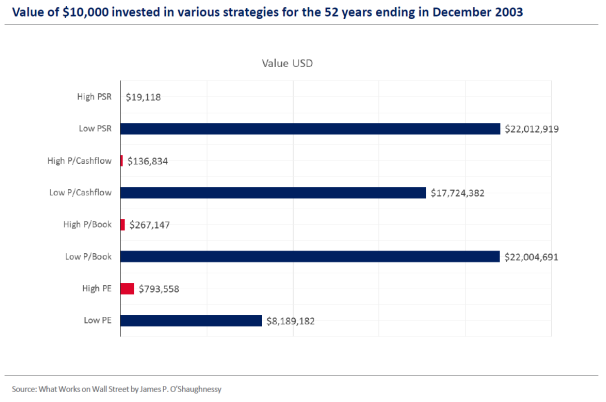 52 years is clearly a long time, but the point still holds: over the long run, value strategies beat just about everything. The problem is that most investors don't have the patience to withstand the inevitable periods of sub-par performance.

This is not to say that the entire US market is overvalued; there are still pockets of value in
North America, but their numbers are thinning as a band of bold investors increasingly herd into an ever-smaller universe of mega-cap global growth stocks with strong price momentum.

But those companies may be precisely the ones most vulnerable to protectionism and trade wars.

Valuation is not the only problem facing US stocks. A strong Dollar will also hurt those US businesses with a sizeable international foot-print. So far the Trump administration, which has only just begun, is sending out mixed messages with regard to the Dollar.

But given prevailing valuations – and the power of mean reversion – it requires some fairly heroic expectations of future revenue growth to warrant current market prices for larger US common stocks. Any margin of safety is wafer thin.

As SocGen point out, 'high quality' (and 'low volatility') stocks are now trading at close to record levels: 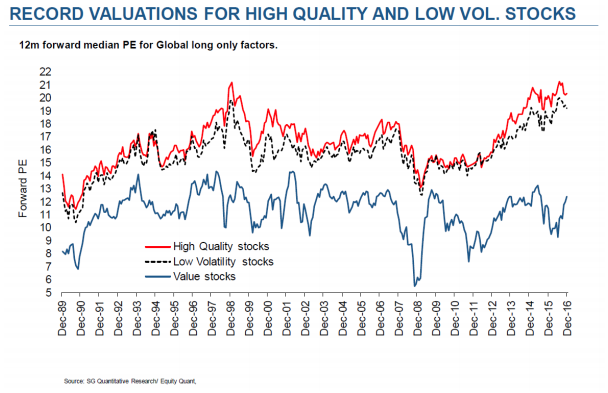 Investors may not appreciate the extent to which high price invalidates the investment case for supposedly 'defensive' stocks – Big Pharma springs to mind, not least because they seem set to be another of President Trump's corporate whipping boys. Disappointment at the performance of 'expensive defensives' may be widely shared in 2017.