END_OF_DOCUMENT_TOKEN_TO_BE_REPLACED

The UNITED STATES in the midst of partisan political turmoil, writes Jim Rickards in The Daily Reckoning.

China is about to fight an all-out trade war with the US, Russia is hunkering down for a new Cold War with the west, North Korea is forcing a new world war, and emerging markets are vulnerable to capital flight as confrontations escalate.

In the middle of all this, is there one investor safe haven left in the world?

The US and UK media have bombarded US investors with nothing but bad news on the Euro and the EU since 2009. This began shortly after the global financial crisis of 2007-2008.

One of the aftershocks was the bankruptcy of the quasi-sovereign wealth fund DubaiWorld the day after Thanksgiving in November 2009. Even as Americans were recovering from the turkey dinners, the financial world was turned upside down by this black swan from the Middle East.

The contagion quickly spread from Dubai to Europe. A liquidity crisis arose. The sovereign bonds of the EU "periphery" of Greece, Italy, Ireland, Portugal and Spain ("GIIPS") were called into question. A major bailout of the GIIPS countries was quickly organized.

This bailout involved money printing by the European Central Bank (ECB), conditional lending by the International Monetary Fund (IMF), and new lending and guarantees by the European Union (EU) based in Brussels and led by Germany. The ECB, IMF and EU became known as the Troika, and were responsible for a series of bailouts between 2010 and 2015.

At this point, early in the crisis, the critics of the Euro came out in force. Led by Nobel Prize winners Paul Krugman and Joseph Stiglitz, and with support from many others including Nouriel Roubini, they screamed that the Euro was doomed!

Their argument was that the GIIPS should quit the Euro, go back to their original currencies such as the Greek Drachma and Italian Lira, immediately devalue to lower their labor costs, and grow their economies with cheap labor, cheap exports, and imported inflation.

In the estimation of Krugman, Stiglitz and the rest, the EU should split into a "northern tier" of strong economies such as Germany and the Netherlands. There would also be a "southern tier", consisting of mostly GIIPS and possibly France. Only the northern tier would be eligible for a common currency.

In effect, the critics said the Euro was certain to fail and the sooner it was buried in its grave, the better.

Everything about this forecast was wrong, and I said so at the time in a long series of TV and radio interviews from 2010 to 2016.

To begin with, the intellectual critics of the Euro paid no attention to what people in Europe actually wanted.

Despite complaints about heavy-handed tactics by Brussels and "austerity," the people of Italy, Greece and Spain had no interest in returning to their former currencies.

Citizens remembered that former currencies such as the drachma and lira had continually devalued. They were an easy way for governments to steal money from savers by such constant devaluation.

The Euro was the first stable currency that most of the citizens of Europe had ever experienced in their lifetimes. Polls showed citizens of Greece and the other GIIPS consistently supported the Euro, notwithstanding their complaints about austerity.

The other development the critics ignored was that the EU was moving quickly to fix the flaws in the design of the Eurozone, the 19 countries that use the Euro.

Originally, the Eurozone had a common monetary policy administered through the ECB. But, there was no common fiscal policy.

This led to fiscal abuses. Countries like Greece and Portugal ran huge deficits with money borrowed cheaply in Euros. Eventually they could not meet their obligations, which led to the European sovereign debt crises of 2010 to 2015.

For intellectuals such as Paul Krugman and Joe Stiglitz, the solution was to break-up the Euro.

But for political leaders in Europe, the solution was always to move toward a common fiscal policy to go alongside the common monetary policy. This is what leaders such as Angela Merkel meant when they proposed "More Europe."

The EU has always been a political project more than an economic project. Europe had come through four hundred years of constant violence and warfare – from the counterreformation, the Thirty Years War, the wars of Louis XIV, the Seven Years War, the Napoleonic Wars, the Franco-Prussian War, World War I, World War II and the Holocaust.

By 1945, Europe was politically, morally, and financially exhausted. The project of European economic integration that culminated in the EU and the Euro was an effort to put an end to war forever by integrating the member nations as closely as possible.

As long as the political will to pursue the European project exists, and it does, then the EU and Euro cannot fail.

This is not to say there have not been wild swings in EUR/USD – there have been. You can see them in the chart below. 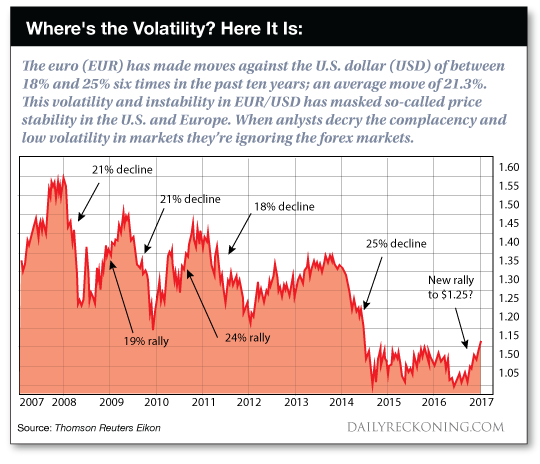 The EUR/USD cross-rate has experienced six separate swings averaging 21.3% each in the past ten years.

What's important to understand about these swings is that they are mostly manipulations of the exchange rate by the two responsible central banks – the Fed and the ECB. The 21% decline in the Euro in 2008 was mostly a flight to quality during the global financial crisis. The Fed gave trillions of Dollars to the ECB in the form of hidden currency swaps in order to bring the Euro back to life.

The 19% rally in the Euro in 2009 was part of the Fed's weak Dollar policy designed to help US exports and bring the US economy back to life after the crisis. This was orchestrated by the two central banks and marked the beginning of the new "currency war" that roiled emerging markets.

The other important fact to understand about the Euro and the Dollar is that they're currencies, not stocks or bonds. A stock can go to zero if a company files for bankruptcy. A bond can go to zero if the borrower defaults. But, major currencies don't go to zero, they just fluctuate in a cross-rate relationship.

Based on these continual 20% swings in EUR/USD, what's next for the Euro?

The most important signal is that the anti-Euro nationalist political tide in Europe seems to have crested. After some close electoral calls in the Netherlands with Geert Wilders and in France with Marine Le Pen, the pro-Euro parties emerged victorious.

In particular, the election of Emmanuel Macron as President of France has given the Euro new life since he is both pro-Euro and is enthusiastic about working with Chancellor Angela Merkel in Germany to make EU institutions stronger than ever.

Merkel is well on her way to another victory in the German elections on September 24. Merkel is the most powerful leader to emerge in Europe since the 1970s of Margaret Thatcher or the 1960s of Charles De Gaulle. And Merkel's answer to the critics of the EU and Euro project is not disintegration but "More Europe".

That is exactly how she and Macron of France intend to proceed.

Finally, and most importantly, the two dominant central banks, the Fed and ECB, are ready to coordinate their currency moves once again. For the seventh time since 2008, the two central banks are ready to orchestrate a move of 20% or more in the EUR/USD exchange rate. This time the move will be in favor of the Euro as it was in 2009 and 2011.

The problem for the Fed is that they have tightened into economic weakness and have come close to throwing the US economy into a recession. The Fed will now "pause" in their interest rate hikes and return to "forward guidance" with respect to future rate hikes and balance sheet normalization. This easing will weaken the Dollar.

At the same time, the ECB is emerging from a long period of ease and is just beginning its tightening phase. The ECB is about four years behind the Fed in this process. While the Fed started its taper in December 2013, the ECB will begin to taper around September 2017.

Once the ECB finishes the taper of bond purchases, probably in mid-2018, it will then move slowly toward interest rate hikes. This tightening phase will strengthen the Euro.

In the currency wars, the combination of Dollar easing and Euro tightening will send EUR/USD soaring.

This decisive move would be the seventh since 2008, and suggests just how volatile currency markets have become.