END_OF_DOCUMENT_TOKEN_TO_BE_REPLACED

Why the single currency is doomed...

The European Commission requires member states to report certain data every April. This year, the timing of the report's release could not be more problematic for Greece, which has been in discussions with the IMF and other EU states over possible bailout assistance. In a note to the report, Eurostat expressed reservations about Greece's accuracy in its numbers from last year, saying:

"Eurostat is expressing a reservation on the quality of the data reported by Greece, due to uncertainties on the surplus of social security funds for 2009, on the classification of some public entities and on the recording of off-market swaps. Following completion of the investigations that Eurostat is undertaking on these issues in cooperation with the Greek Statistical Authorities, this could lead to a revision for the year 2009 of the order of 0.3 to 0.5 percentage points of GDP for the deficit and 5 to 7 percentage points of GDP for the debt."

If these "reservations" prove correct, it will catapult Greece into the debt-to-GDP leader at 122.1%, leap-frogging Italy, which is currently at 115.8%.

But perhaps most telling is the report's title – "Euro area and EU27 government deficit at 6.3% and 6.8% of GDP, respectively." Recall that the EU's Stability and Growth Pact mandates a budget deficit ceiling of 3.0%, and we see that the 16 Euro area members are, in aggregate, in gross violation of the pact. Even more alarming is the rate of change in the aggregate budget deficit figure from 2008 to 2009, growing 230%.

The report, on the whole, paints a picture of an experiment in currency sharing and cross-border "normalization" of fiscal order that has gone terribly wrong. The old saying that a camel is a horse designed by committee seems to be underway here. It will be amusing to watch into what sort of "animal" the EU morphs in the coming years.

As one would expect on reading news that is less than cheery for the Eurozone, the US Dollar has been moving up, sending gold lower. So, perversely, you have gold and the Euro moving together.

While the current rebound in the Dollar may be discomfiting to some gold investors, especially in that gold has been facing headwinds again, in our scenario of a broad-based crisis in the global fiat currencies, the major currencies will come under pressure individually before coming under pressure collectively.

Today, safe-haven seekers reflexively run from the Euro to the US Dollar, which in turn sends a signal to the trading community to sell gold for no better reason than the historical inverse connection between the Dollar and gold. This is only temporary, as you can see in the following chart plotting the Euro against gold over the last troubled year. 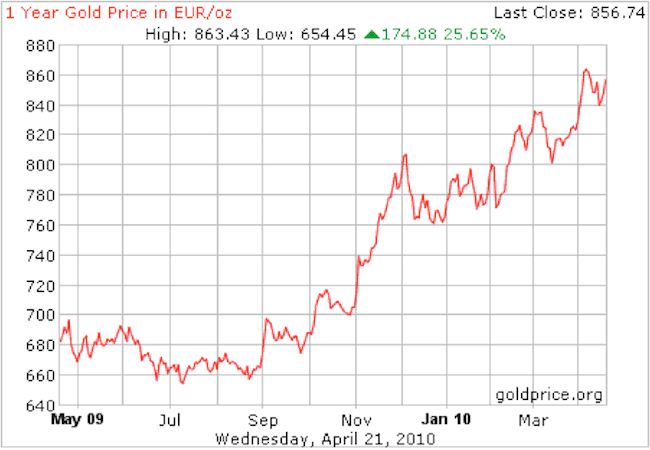 This is all just part and parcel of the secular trend that will lead to the end of the fiat currency experiment as the world wakes up to the full implications of the institutionalized monetary abuse engendered by a fiat system. As is so clearly evidenced in the drama now playing out in Greece, when a government is forced to solve its debt problem by issuing more debt, the end is nigh.

Get the safest Gold at the lowest prices, by using BullionVault...