END_OF_DOCUMENT_TOKEN_TO_BE_REPLACED

Not the words of Mario Draghi – yet. They are the words of film director Francis Ford Coppola in relation to his magnum opus, Apocalypse Now, a film that so outrageously exploded beyond its budget and beyond any reasonable compass that during its making it started being referred to as 'Apocalypse Later'. Coppola's unique vision came at a price. What was expected to be a 14-week shoot in the Philippines ended up taking more than a year.
Coppola fired his leading man, Harvey Keitel, after just two weeks. His replacement, Martin Sheen, turned out to be fighting alcohol addiction and suffered a heart attack on set. Numerous members of the crew went down with tropical diseases. At key points, helicopters hired for pivotal action sequences were suddenly redirected to quell a revolt in the southern Philippines. Then a typhoon hit, the set was destroyed and the production was shut down.
Throughout all of it, Coppola was dealing with increasingly worried money men back in Hollywood as the film's budget ran dry. As the film's scriptwriter, John Milius, pointed out:

"Studio executives, you know, are not noted for their social courage".

And then Marlon Brando arrived on set, so hugely overweight as to be almost unrecognisable. He didn't have the barest knowledge of the script. And there were actual dead bodies on the set, bought to add some 'atmosphere' from a local who turned out to be a grave-robber. Then Brando shaved all his hair off and insisted on improvising all of his scenes.
Coppola had sunk his own life savings into the film. He faced financial ruin if he couldn't finish it. He suffered a nervous breakdown and on at least three separate occasions allegedly threatened to commit suicide.

"My movie is not about Vietnam," he once explained, "my movie is Vietnam."

The markets are not about Vietnam. They are Vietnam. There's a difference, of course. When a film studio runs out of capital, the production gets shut down. Corporate resources can only ever be finite. But when a government runs out of capital, it simply borrows more. Or taxes more. Or both. At least for as long as it has access to credit by way of maintaining the confidence of the bond market.
Practically every western government has got its finances into a desperate mess. In the words of US fund manager Paul Singer of Elliott Management,

"America is deeply insolvent, and for that matter, so are most of continental Europe, the UK and Japan."

For as long as governments can perpetuate the illusion of solvency, they can continue to borrow, and therefore also to spend. But once the illusion is broken...? 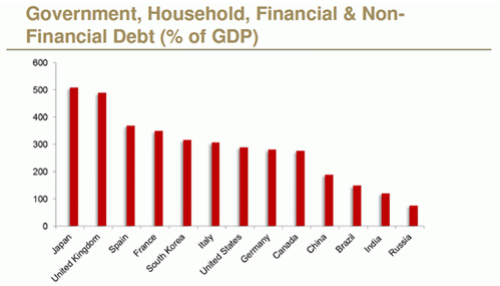 The chart above, courtesy of Incrementum AG and Ronald Stoeferle, shows the extent of the problem. We all know that Japan is drowning in debt, which makes Japanese Government Bonds about the most dangerous asset in the world right now, especially given the Bank of Japan's pledge to double its monetary base, ensuring that holders of JGBs will be paid back in ever less valuable currency.
The vulnerability of the UK's creditworthiness is less widely appreciated. Pimco's Bill Gross, still clinging on to the $229 billion remaining in his Total Return bond fund, referred to UK Gilts as "resting on a bed of nitroglycerine" as far back as 2010. The UK is hardly alone in running its national treasury on empty. Not one single major western government possesses a stable balance sheet. Everybody has thrown caution to the winds, in the illusory hope that ultimately somebody will pay. If you hold western government bonds, that somebody is likely to be you.
Actions have consequences. Governments are no different from individuals or corporations or film studios in this respect – they can merely perpetuate the myth of solvency for longer, given the credulity of global capital markets and of agency investors with no real skin in the game in their bond portfolios. But at some point, the piper must be paid. Which is why every major western government is determined to inflate, and pay the piper (bondholders) in ever more worthless paper money. And this is why Mario Draghi has now driven interest rates to below zero.
The natural corollary to universal currency debasement is to own a currency and durable store of value that cannot be printed on demand. If only we could find one.