END_OF_DOCUMENT_TOKEN_TO_BE_REPLACED

Because this artificial stability is ending...

THERE is nothing natural about the stability of the past 9 years, says Charles Hugh Smith, author of the OfTwoMinds blog in this article reposted at Addison Wiggin's Daily Reckoning.

The bullish trends in risk assets are artificial constructs of central bank/state policies. As these policies are reduced or lose their effectiveness, the era of artificial stability is coming to a close.

The 9-year run of bull-trend stability is ending as a result of a confluence of macro dynamics:

Market participants have become accustomed to an implicit entitlement: that investors/speculators will earn consistently positive returns on their capital, as central banks and governments have both the power and the mandate to "save" participants from losses and generate phantom wealth ("gains").

This entitlement is ending, and I suspect few participants have a strategy for a permanently riskier environment going forward.

How much will risk assets have to decline for "wealth" to return to the production of real-world wealth in the real-world economy? Clearly, the answer is "a lot".

The illusion that risk can be limited delivered three asset bubbles in less than 20 years. 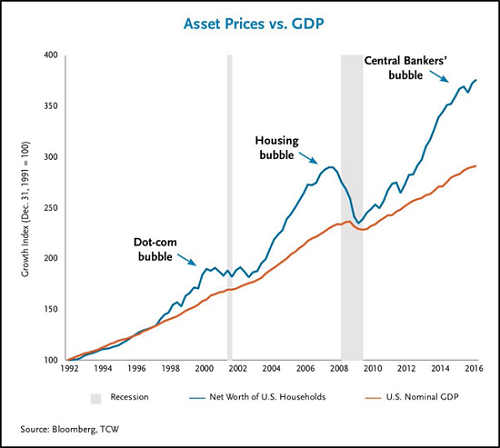 So, has anything actually changed in the past two weeks?

The conventional bullish answer is no, nothing's changed; the global economy is growing virtually everywhere, inflation is near-zero, credit is abundant, commodities will remain cheap for the foreseeable future, assets are not in bubbles, and the global financial system is in a state of sustainable wonderfulness.

As for that spot of bother, the recent 10% decline in stocks: ho-hum, nothing to see here, just a typical "healthy correction" in a never-ending bull market, the result of flawed volatility instruments and too many punters picking up dimes in front of the steamroller.

Now that's winding up, we can get back to "creating wealth" by buying assets – $2 million homes in Seattle that were $500,000 homes a few years ago, stocks, bonds, private islands, offshore wealth funds, bat guano, you name it. Just borrow whatever you need to borrow to buy more.

(But don't buy Bitcoin. No no no, a thousand times no. It is going to zero, Goldman Sachs guaranteed it.) Ahem.

And then there's reality: something has changed, something important.

The endlessly compelling notion that risk has magically vanished as the result of financial sorcery is now in doubt.

How did we get here? And how can central banks "retrain" participants to accommodate new conditions?

Human habituate very easily to new circumstances, even extreme ones. What we accept as "normal" now may have been considered bizarre, extreme or unstable a few short years ago.

#1. Near-zero interest rates
If someone had announced to a room of economists and financial journalists in 2006 that interest rates would be near-zero for the foreseeable future, few would have considered it possible or healthy. Yet now the Federal Reserve and other central banks have kept interest rates/bond yields near-zero for almost nine years.

The Fed has raised rates a mere 0.75 percentage points in three cautious baby-steps, clearly fearful of collapsing the "recovery".

What would happen if mortgages returned to their previously "normal" level around 7% from the current 4%? What would happen to auto sales if people with average credit had to pay more than 0% or 1% for an auto loan?

Those in charge of setting rates and yields are clearly fearful that "normalized" interest rates would kill the recovery and the stock bubble.

As many of us have observed, "official" inflation of less than 2% does not align with "real-world" inflation in big-ticket items such as rent, healthcare and college tuition/fees. A more realistic inflation rate is 7%-8% annually, especially in the higher-cost regions of the US.

But setting that aside, there is a puzzling asymmetry between low official inflation and the unprecedented expansion of money supply, debt and monetary stimulus (credit and liquidity). To date, most of this new money appears to be inflating assets rather than the real world. But can this asymmetry continue for another 9 years?

#3. Stock markets soared...
...but sales and profits are stagnant. Everyone knows central banks are still pumping billions of Dollars per month into the financial system, and this (coupled with central bank purchases of stocks and bonds) has been pushing stocks sharply higher for the past 9 years, with only a few hiccups along the way.

This has pushed valuations out of alignment with traditional metrics of valuing assets such as sales and profits – a process known as "price discovery." In essence, traders and investors have habituated to central banks driving private-sector markets higher, not because the assets are generating more value or profits. but simply as a function of centralized money creation and asset purchases.

All of these extremes generated mal-investment, diminishing returns and perverse incentives for ramping up unproductive and risky speculation, leverage and debt. Yet the central banks have trapped themselves in this risky trajectory because they've pushed the accelerator to the floorboard for 9 years. Any extreme held in place for 9 years has long slipped from "temporary" to permanent.

Participants have now habituated fully to central banks extreme stimulus of financial markets, and in a sense they've forgotten how to price assets based on real-world private-sector measures.

But now the Fed is taking the punch bowl away with quantitative tightening. It's beginning to destroy the money that propped up markets.

And volatility has returned to the markets.

Risk cannot be made to disappear; it can only be transferred onto others or off-loaded into the financial system itself.

Though no one in the financial sector dares say this in public, the possibility that central banks can no longer sustain the illusion that risk has been vanquished is now front and center.