END_OF_DOCUMENT_TOKEN_TO_BE_REPLACED

7 reasons to be bullish on emerging Europe assets...

WITH the UK leaving the EU and Italian banks set for yet another bail-out, there are 7 good reasons to look beyond the gloom and consider the eastern side of the European Union according to Frank Holmes at US Global Investors.

#1. Eurozone PMI at a Six-Year High
For the month of March, the preliminary purchasing manager's index (PMI) for the Eurozone reached 56.7, its highest reading since April 2011. Significant gains were made in new work and backlogs of work, employment and service sector job creation.

#3. Emerging Europe Manufacturing: Full Speed Ahead
When Western Europe is performing well, Eastern Europe typically benefits by proxy, as the latter exports to the West. With a thriving manufacturing industry that's attracted top international corporations such as Mercedes-Benz, GM, Audi, Bosch, Lego and Nestlé, just to name a few, Hungary led all others in February, posting a PMI of 59.5. 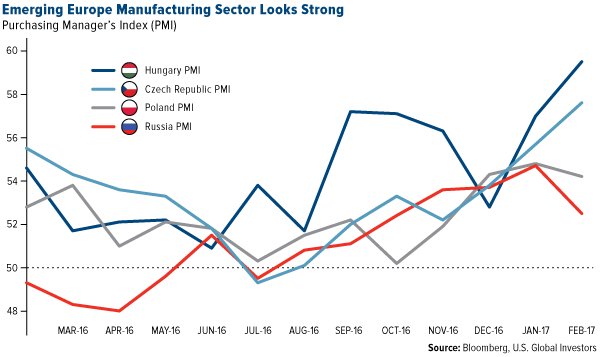 #4. The Migration Crisis Has Abated
Mediterranean sea arrivals into Europe have fallen to 2,731 a month, from a high of 220,000 in October 2015. This is important because concerns of immigration and terrorism have largely driven recent secessionist and anti-European Union sentiment, most notably among far-right hopefuls such as the Netherlands' Geert Wilders and France's Marie Le Pen. 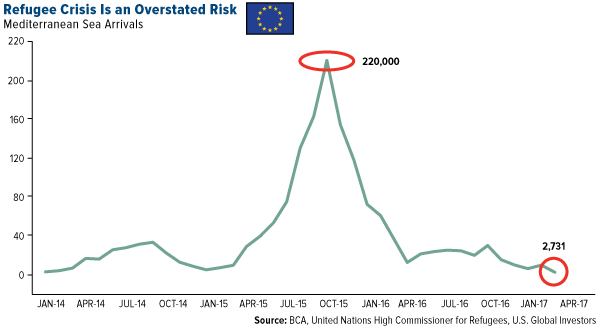 #5. Trump and OPEC May Have Helped Russian Stocks
The election of President Donald Trump, who has repeatedly praised Russia and its leader Vladimir Putin, as well as crude oil production cuts by the Organization of Petroleum Exporting Countries (OPEC), may have helped Russian stocks shrug off recent declines in the price of Brent oil. With the country coming out of recession, BCA Research just overweighted Russian equities, the ruble and credit relative to other emerging European states. 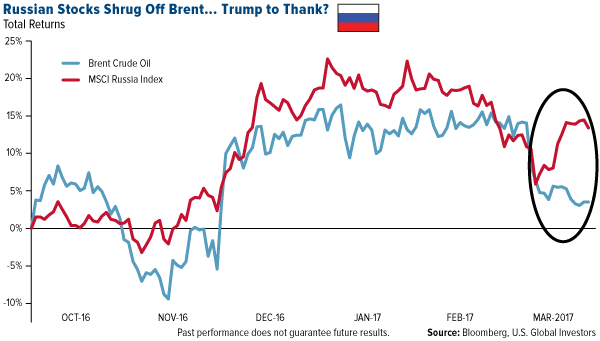 #6. Poland Making Good on Promise to Support Families
The Polish economy has lately benefited from increased social spending and wage hikes. The government delivered on its Family 500+ program, giving each family with more than one child 500 PLN ($130) per child per month. This has doubled some families' disposable incomes and led to a recent surge in new private housebuilding starts. What's more, Poland is currently experiencing a baby boom, which should support economic growth in the years to come. 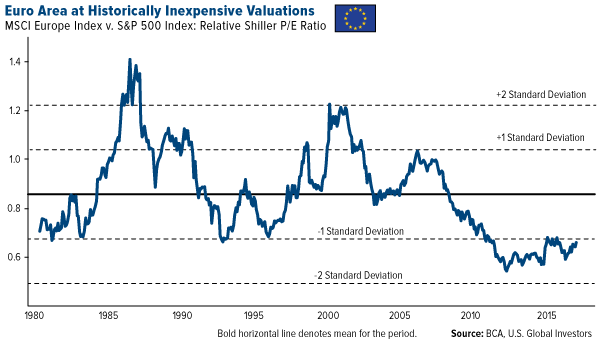 This should be especially enticing for investors who believe American stocks are too expensive right now.