END_OF_DOCUMENT_TOKEN_TO_BE_REPLACED

Reasons to be cheerful despite the dangerous error of "economy as engine"...
METAPHORS are powerful, writes Tim Price of PFP Wealth Management on his ThePriceOfEverything blog.
Words and images matter, because they point to fundamental beliefs. John Maynard Keynes, in his article ' The Great Slump of 1930', spoke of the economy as a "delicate machine", and the idea of the 'economy as engine' has long been popular with traditional economists.
One of the great corrective insights of the Austrian economic school is that the economy is not an engine and it cannot be modelled. It cannot be modelled because it is us – the economy comprising the essentially infinite interactions of billions of people. So perhaps the most dangerous fallacy frames the very nature of our economic and financial system the wrong way. Garbage in; garbage out.
The damage wrought by bureaucrats and their economic aides who believe that pulling this imaginary lever and pressing that imaginary switch can direct the path of something as tremendously complex as the economy is then compounded by the actions of those unelected bureaucrats as they transform the order of the free market into the chaos of a planned economy. Misguided actions have undesirable consequences.
Make time, if you can, to watch this 2013 investment review from Century Management. For all the problems and financial distortions caused by overconfident central bankers and hopelessly indebted governments, Arnold Van Den Berg manages to convey a wonderfully balanced and even optimistic assessment for the US economy (and by extension for much of the world). A hat-tip to Jonathan Escott for bringing it to our attention.
Van Den Berg highlights, for example, the impact of fracking on the domestic energy market; an Egyptian fertilizer company recently established a plant in the US where natural gas prices are now cheaper than in the Middle East. He also alludes to the advances in 3D printing, nanotechnology, artificial intelligence and robotics.
As an example of the latter two trends, he points out that in July last year, the US Navy landed an unmanned fighter jet on the aircraft carrier USS George H.W.Bush:

"When you consider that the computer had to factor in airspeed, altitude, the angle-of-attack, pitching, a rolling flight deck, not to mention the changing winds and seas, this was a historic landing for the Navy and maybe equally so for robots and artificial intelligence."

We're probably guilty of having historically focused more on the threats to economic wellbeing. Van Den Berg puts these into context. Over the last 40 years, the US has experienced:
The US, in other words, has always had problems. As he puts it, the way you invest in such an environment is "to invest in assets that benefit from the growth in the economy which eventually comes".
Between 1978 and 2013 the annualised returns of different asset classes were as follows:
Source: Century Management 2013 Review
That history of returns is all very well, of course, but it has practical limitations, because starting valuations matter.
Both the US stock and bond markets were objectively cheap at the beginning of the period, which accounts in large part for the magnitude of their returns. Neither market is objectively cheap today (although there are equity markets in other parts of the world that are, our favourites being Asia and Japan). And across each asset class, the past has little useful to say to us about the future. Even if those returns do have predictive value over the medium term, they are powerless in the face of investors' behavioural responses to any sharp short-term falls in value.
The medium term has a tendency to be forgotten when losses are incurred in the short run. Probably the major reason for our recent focus on the negatives is that what we perceive as the single biggest negative factor influencing asset markets – the price-distorting influence of the most aggressive monetary stimulus in world history by the world's central banks – has the potential to be an existential problem for the financial system itself.
Or as Ronald-Peter Stoeferle and Mark Valek put it in their latest Incrementum chartbook, Monetary tectonics:

"Due to structural over-indebtedness and the resulting addiction to low / negative real interest rates, we are certain that the traditional way of thinking about financial markets and asset management is no longer beneficial for investors.
"Financial markets have become highly dependent on central bank policies. Grasping the consequences of the interplay between monetary inflation and deflation is crucial for prudent investors."

The inflation / deflation debate and its associated money creation has certainly been the motive force behind asset price evolution for the past five years. Incrementum nicely depict this tug of war, as shown below. 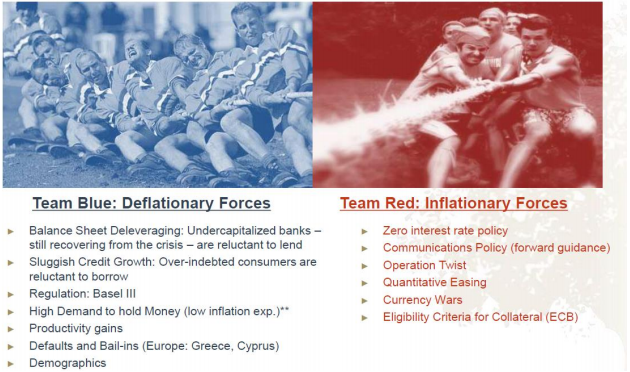 Source: Incrementum
Whether we like it or not (and we certainly don't like it), the sad truth is that an unelected monetary bureaucrat, Janet Yellen, is now responsible for the fate of your life savings.
She's not entirely alone – she has the company of Mark Carney, Mario Draghi and Haruhiko Kuroda. Through a combination of stealthy mission creep and abject unaccountability on the part of elected politicians, central bankers have been allowed to go "all-in" in their pursuit of anti-deflationary policies. How you regard US equities, UK property, Eurozone debt, and for that matter pretty much any financial asset will be a function of what you anticipate central bank governors will do, and in turn whether those policy actions will be "successful" (given that the ultimate success of monetary policy is pretty sketchily defined given the scale of it in money terms).
Human beings have a weakness when it comes to authority. The Stanford Prison Experiment showed that given sufficient latitude, otherwise ordinary people are at risk of developing genuine sadistic tendencies. Stanley Milgram's experiments in 1961 showed that when faced with a man in a white coat and a clipboard, otherwise ordinary people are willing to give other people possibly fatal electric shocks.
Summarising his work, Milgram wrote:

"The legal and philosophic aspects of obedience are of enormous importance, but they say very little about how most people behave in concrete situations. I set up a simple experiment at Yale University to test how much pain an ordinary citizen would inflict on another person simply because he was ordered to by an experimental scientist.
"Stark authority was pitted against the subjects' strongest moral imperatives against hurting others, and, with the subjects' ears ringing with the screams of the victims, authority won more often than not. The extreme willingness of adults to go to almost any lengths on the command of an authority constitutes the chief finding of the study and the fact most urgently demanding explanation.
"Ordinary people, simply doing their jobs, and without any particular hostility on their part, can become agents in a terrible destructive process. Moreover, even when the destructive effects of their work become patently clear, and they are asked to carry out actions incompatible with fundamental standards of morality, relatively few people have the resources needed to resist authority."

For Philip Zimbardo at Stanford, authority was a regular Joe given the uniform of a prison guard. For Stanley Milgram, authority was a man in a white coat. For us today, authority is Janet Yellen.
Now Janet Yellen may be privately a nice person, but in her institutionalised form she is, like Messrs Carney, Draghi and Kuroda, at risk of becoming an economic agent in a terribly destructive process. The multi-trillion Dollar question is whether the Fed (and its peers) can remove some of the extraordinary stimulus they've provided to markets without crashing them and the real economy around them.
Or indeed whether, in response to falling markets, that stimulus returns in even more extraordinary form, making the resultant crash presumably even more severe. Asset diversification was largely a bust last year, because stocks were pretty much the only financial asset that went up. We held stocks, but (with the benefit of hindsight) evidently not enough. Investors may not yet be sufficiently aware of the devilishly fraught nature of current markets and their dependency on decisions made by a handful of monetary "engineers".
The figures are certainly staggering. As Grant Williams points out,

"Bonds have had their own first down year in 14 years DESPITE the world's major central banks having supplemented the natural forces of supply and demand to the tune of a combined $4.7 trillion over the past five years and around $1.5 trillion this year alone, and that's not as newsworthy as the decline of gold?"

There's a process, and there's an outcome. We control our investment process, but not its outcome (certainly not in the short run). Despite diversification "not working" in 2013, it still strikes us as the only logical response to a monetarily out-of-control world.
And the other logical policy response, when it comes to equity investing, is to focus exclusively on Graham & Dodd-style deep inherent value. Anything else can and will end in tears, and possibly quite quickly.