END_OF_DOCUMENT_TOKEN_TO_BE_REPLACED

A pile-up in the UAE's first "hot property" market...

"The future is what we will make of it."
- Seen on a t-shirt of a young UAE national in the Souk Al Babar

THE FOUR-LANE Sheik Zayed highway stretching between Dubai and Abu Dhabi is, at best, a competition for speed, writes Addison Wiggin in The Daily Reckoning, on secondment to the Middle East.

At worst, this road is a death trap.

Among the UAE's claim to world's largest shopping mall, world's tallest building, and world's longest metro railway built all in "one go", is this highways' claim:

One of the world's biggest automobile pile-ups...

On March 12th 2008, some 25 cars traveling along the route burst into flames after piling into one another as a band of fog rolled in from the Gulf. 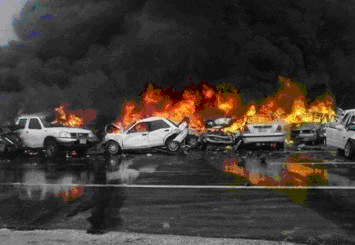 Nearly 60 cars were in the accident altogether, 347 people were injured in the crash, and six lost their lives.

"The crash happened because everyone was speeding despite the severe weather conditions," an Abu Dhabi traffic police officer said at the crash site, as reported by Gulf News. "Drivers weren't leaving a safe distance between cars and this resulted in everyone hitting each other after the first crash."

A documentary short posted on YouTube capturing the 911 calls placed from motorists describes 'Foggy Tuesday' as a morning devoid of "human caution". The film also heralds the obvious bravery of the men who arrived from the Abu Dhabi fire, police and rescue crews to save those who'd become entangled in the pile up.

The metaphor suggested by this fantastic auto accident? We will not hold you in suspense any longer. It is a perfect fit for anyone studying the Dubai property bust. And like the writer of a Hollywood script, we cannot help by bring the connexion to your attention.

Yesterday, on the recommendation of our new friend Moe, we traveled the same stretch of Sheik Zayed highway where the accident had taken place. Mohammad "Moe" Fathi Al Abrozani a Bahrainian-Qtari –whose mother was an Iranian-American – was born in Abu Dhabi, educated in California, lived briefly in New York and Chicago, then spent seven years in Germany. (His German is so fluent our German friends here in Dubai, Andre and Vereena, did not expect him to be Arabic when they first met him in person.)

Moe returned to the Middle East to take part in the expansive boom attracting so much attention around the globe. He's now an executive with TwoFour54 Media, a firm set up by the government in Abu Dhabi to woo Western firms into establishing their Middle East operations in the new Media City in the UAE's capital city. The rulers of Abu Dhabi had witnessed the efforts, successes and failures of their fellow emirate, Dubai, and have since vowed to create a modern media communications hub greater than anything now in existence.

"Why mess with visas, permits and expatriate contracts down in Dubai?" Moe asked us at dinner the other night, "when you can go to Abu Dhabi and get them all from the government free...?" One foggy morning in the year 2008, the reckless speculation that spurned much of the outrageous development projects in Dubai began to pile up on each other. Now the motionless construction sites lay in wait for assistance. In a scene familiar across the West, Abu Dhabi, the company line suggests, has "come to the rescue" of Dubai; with low cost loans, paper money, and the sincerity of an assassin.

When we met up with Moe and Andre at Shakespeare's (a brand-new bar in the all-new Souk Al Bahar), they were quietly puffing from sisha – the traditional water pipes bubbling with aromatic smoke. Our mission in the region was and is simple. We want to establish a presence on the ground from which we can monitor the developments and assess investment opportunities in Dubai, the UAE and across the Middle East unfiltered by the mainstream press. But here we were being asked to consider moving the infrastructure of our publishing business, our families, our lives, half-way around the world to the desert. Bloomberg, CNN, Forbes are all moving and or expanding their operations in either Dubai or Abu Dhabi.

Why shouldn't we? Our friends in Abu Dhabi are apparently ready and willing to help.

Dubai and Abu Dhabi, the two leading Emirates of the UAE are relatively new to global finance and trade...but they want you to know they have arrived in high style. This weekend, Formula One racing makes its debut in Abu Dhabi. The government had to pull workers from several of its five star seaside resort project to complete the track and facilities on time. Ferrari World, a massive theme park dedicated to the sport sits nearby. Yesterday, the Emirates Palace Hotel – the world's first seven-star hotel – saw Demi Moore, Hilary Swank, and last year's Oscar winner, Freida Pinto grace the opening ceremonies of the Middle East Film Festival. The Abu Dhabi sovereign wealth fund has famously leveraged their way into both of the leading football franchises in the world – F.C.Barcelona and Manchester United.

Still, our friend Peter Cooper recalls a time in his own family history when Dubai was nothing but a backwater of the British Empire, a port full of smugglers, nomads and thieves. His great uncle had been stationed here during World War II. At the time, the strife caused by the war left the ragtag bunch group of 7,000 residents on the edge of starvation.

Sheik Rashid, the father of modern Dubai, dredged the creek in the 1950s, establishing Dubai as a free trade port. At that time, the creek-dredging project was roundly criticized, as it should have been. The project cost nearly 3 times Dubai's annual GDP. But it also established Dubai as the trading center for goods coming into the Middle East. If you go down by the creek today there are Iranian Dhows – the Middle East's answer to the Chinese Junk – bringing rice, rugs, gold and refrigerators back and forth across the Persian Gulf. Iran's ports are about a two-day drift away for these wooden ships. Kuwait and Iraq a day or two more. Bahrain, Qtar, Oman closer still. Without the fantastic success of that initial dredging project, we wouldn't be writing to you from the desert today.

"Dubai the hot spot..." has been a center of trade, smuggling and the rougher trades ever since. As the back jacket copy on a 1970s novel about gold smugglers in Dubai written by the French Connection author Robin Moore indicates: "Dubai, where adventurers play the world's most dangerous games...gold, sex, oil and war. Cold- blooded adventurers in a blistering Mideast empire where life is cheap and no price too high for pleasure." The novel is still banned here because the sheiks don't like the image it portrays.

The promise of riches, however, is part of the region's allure and what has attracted those expatriates who chosen to ride out the bust and continue to live here to this day.

The most recent gold rush, the boom in Dubai property, came on the heels of the terrorist attacks on September 11, 2001 and the same policy response that spawned a housing and consumption bubble across the United States, London and much of the West. Arabs flush with energy and trading capital brought much of that money home to the Middle East fearing a Western clamp down. At the same time, investors in Dirham-backed assets – the local currency which has enjoyed a US-dollar peg since November 1997 – benefited from the same era of low interest rates that soccer moms in Montgomery County, Maryland or gamblers in Las Vegas, Nevada did.

And like all booms, the property in Dubai witnessed its excess and its pathos. An article in this week's Asian edition of Time magazine laments the manmade island project meant to mimic all the countries on the planet:

"The World is one of many architectural fantasies in Dubai that now appear to be shimmering mirages. The emirate boasts the 818m Burj Dubai, the world's tallest skyscraper; a manmade island shaped like a giant palm; a ski slope in a shopping mall; an 18-hole golf course in the middle of the desert that will slurp down 3.8 million liters of water a day. But the dozens of giant cranes that once littered the skyline are beginning to migrate elsewhere. Dubai today has the feel of a futuristic, five star ghost town blasted by sandstorms."

"The fools!" we can hear readers of Time Asia chuckle with superiority. Everyone likes to kick a gambler when he's down.

But the story remains. On our way to Abu Dhabi yesterday we passed by the free zone surrounding the new deepwater global trading port at Jebel Ali. Business Bay near Jebel Ali is the home to many of the Bubble Era development projects, 30-story towers standing side-by-side, dark windowed and tenantless.

We suspect many of these nutty projects – like the City of Arabia, which had boasted an amusement park full of life size animatronic dinosaurs as its calling card during the boom – will never find the funding to finish. More sober projects that are or are nearing completion will likely take years to find tenants. And those "investors" who bet big and large on Dubai property in 2003-08 are no doubt already wishing they never had.

But the free zone near Jebel Ali also the site of Dubai's real potential; banking and trade. Corporate tax rates in are effectively zero. You name a multinational and Moe can point to their local subsidiary. The Dubai Mall, for example, is reported to need 10,000 shoppers a day to break even but now only sports around 7,000. Why do the world's most famous brand names all have shops open and spiffy already, we couldn't help but wonder. It has to be for those fine tax rates, we couldn't help but conclude.

Among other racy themes we heard this week, Dubai is supposed to now be the world capitol of the flesh trade. And the gold price hit an all- time high early in the week after we arrived sparked by rumors the GCC would back a unified currency with Gold and provide oil traders an alternative pricing unit than the US Dollar...

We suspect this fantastic wreck in the desert is only one scene in a long, exhilarating drama. We're not "long" Dubai in any real investment sense. Not now anyway. But, like most onlookers to the spectacle, we struggle to avert our eyes. The story promises more exciting car chases, more steamy sex scenes and political intrigue to come...and we'd be lying if we didn't admit we're suckers for a good story. And, who knows, we may open an office of our own there.

Want to Buy Gold today, but unsure how to do it? Make gold simple, secure and cost effective at BullionVault...