END_OF_DOCUMENT_TOKEN_TO_BE_REPLACED

“Reality is merely an Illusion," as Einstein said, "albeit a very persistent one...”

NO MATTER WHAT bearish idea you might have conjured up for the Dow Jones Industrials (DJI) for the past six years, somehow, the faithful die-hard bull managed to defy all the skeptics.

The DJI closed higher for the seventh month in a row in January, to a new record high of 12,650. The S&P 500 rose for the eighth straight month, and hasn’t been scathed by a 2% correction since mid-July.

On January 31st, the US Commerce department painted the goldilocks scenario that Wall Street has been betting on for the past six months. The US economy rebounded to a 3.5% growth rate in Q4 from a 2% rate in the previous quarter, while on the inflation front, the PCE price index fell at a 0.8% rate in the quarter, the biggest decline since the third quarter of 1954 when it dropped 1.2 percent.

Adding to Wall Street’s jubilation, the Fed kept interest rates on hold at 5.25%, saying US inflationary pressures are easing, and the housing market is stabilizing. The ultimate rosy scenario! All bearish news on the earnings front was ignored, such as disappointing results from DJI heavy-weight 3-M, which caused its stock to tumble 6%, after it warned that the global economy is slowing. 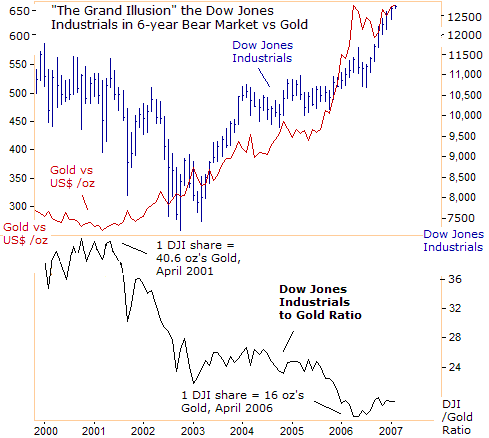 But the DJI’s historic surge towards 12,700 is nothing more than a grand illusion. The reality is that the DJI remains within a persistent six-year bear market against gold.

In April of 2001, one DJI share was worth 40.6 oz’s of Gold. Today, 1 DJI share can buy 19.3 oz’s of Gold. The sharp drop in crude oil from around $80 per barrel to below $60 per barrel only provided a small bounce for the DJI/Gold ratio from a low of 16 oz’s in April 2006. No wonder central bankers lose sleep over the gold market, which is a direct threat to their money printing schemes.

“Whoever undertakes to set himself up as a judge of Truth and Knowledge is shipwrecked by the laughter of the gods...”
- Albert Einstein

HOW SHOULD ONE react to Tokyo’s fuzzy math, after government apparatchniks added 34 items to the Japanese consumer price index last August, whose prices on balance were falling, and removed 48 goods and services that were becoming more expensive?

The fuzzy math produced a stunning two-thirds decline in Japan’s core consumer inflation rate to 0.2% in July, from the 0.6% rate reported in June.

Tokyo’s new methodology for computing the core rate of consumer inflation, included revisions for all the 2006 data, and the difference is dramatic. In the month of May for instance, the new core CPI base showed zero inflation, compared with a 0.6% annualized rate under the previous rules. Behind Tokyo’s sleight of hand, is a power play in which Japan’s Ministry of Finance aims to block Bank of Japan chief Toshihiko Fukui from raising the cost of financing Japan’s $6.4 trillion national debt.

The ruling LDP party has set itself up as the judge of truth over official Japanese inflation statistics that are accepted as gospel by the mainstream media. The LDP said the CPI was just 0.3% higher last month from a year ago, a remarkable achievement considering the Bank of Japan’s 0.25% overnight loan rate is the lowest on the planet, and the Yen’s real trade-weighted value hit a 21-year low in January.

But it’s the Tokyo Gold traders who are having the last laugh. 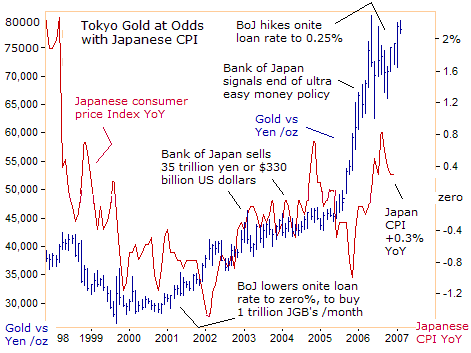 Tokyo gold is trading near an 18-year high, up 74% from two years ago. The BoJ fell prey to heavy political pressure on January 18th, and left its overnight loan rate unchanged at 0.25%, sending the Yen lower and gold higher. One of the world’s most powerful central banks, which is exporting Yen through-out the world, has been hi-jacked by the political establishment, with a radical inflationist bent.

But the LDP’s cheap Yen policy, which sent Japanese exports to record highs in 2006, is now under attack by European finance officials, who complain that the weak Yen against the Chinese yuan, the Euro, and the US Dollar, gives Japan an unfair trade advantage over European exporters.

With the ECB poised to lift its repo rate to 3.75% next month, the Euro is bound to go higher against the Yen, unless Tokyo’s Warlords relent to a tiny quarter-point rate hike to 0.50 percent. 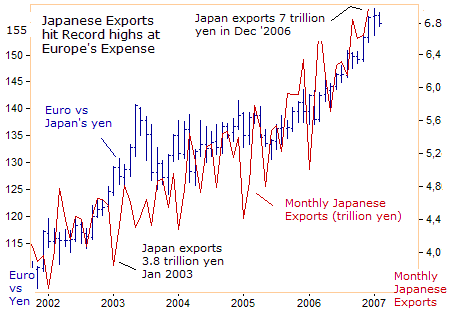 On Jan 31st, Bank of France chief Christian Noyer was vocal about the LDP’s abuse of power. “I’m concerned about developments in the Yen. The Yen exchange rate is not in line with an improvement in the Japanese economy and its strength. Japan is one of the engines to drive global growth. A weak Yen will cause distortion in the world economy in the medium term,” he said. “The Yen must reflect the value of the Japanese economy,” echoed French Finance Minister Thierry Breton last week.

The Yen has fallen more than 60% against the Euro since 2001 giving Japanese exporters, windfall profits and more room to maneuver with prices. For the European car industry, the weak Yen subtracted 200 million euros from Germany’s Volkswagen’s profits in the first nine months of 2006. Meanwhile the operating profit of Japanese rival Toyota in the six months to the end of September 2006 reached record highs, partly thanks to the weak Yen.

But Tokyo gained a key ally ahead of the expected clash with French, German,and Italian finance officials this weekend. US Treasury chief Henry Paulson said he was not disturbed by the Yen’s break-out above last year’s high of 120-Yen. “From my standpoint, the big point is the Japanese have a currency that is traded in an open and competitive marketplace based upon economic fundamentals,” he said, signaling no pressure on Tokyo.