END_OF_DOCUMENT_TOKEN_TO_BE_REPLACED

Double-dip recession risk is growing, but policy tools to fight it are already spent...

US home sales have dropped like a brick since the end of the special tax breaks for buyers. Weekly job reports are showing much larger rises in unemployment claims than previously expected – 427,000 new filings in just the last weekly report.

The problem this time around, however, is not just the economy itself. The problem is that our supposed saviors are all out of tools to help the economy climb out of the deep, dark hole we now find it in.

The tool belt of any monetary regime is limited to begin with. Nothing more than loosening up the debt purse strings with unrestrained interest rate policy and some additional lending from the central coffers to add to liquidity. These tools are the economic equivalent of performing reconstructive dentistry with a sledgehammer and monkey wrench:

Effective, but not exactly precise.

And as Goldman Sachs recently pointed out to a number of its clients, the world's leading developed nations have all but exhausted the few tools available to them: 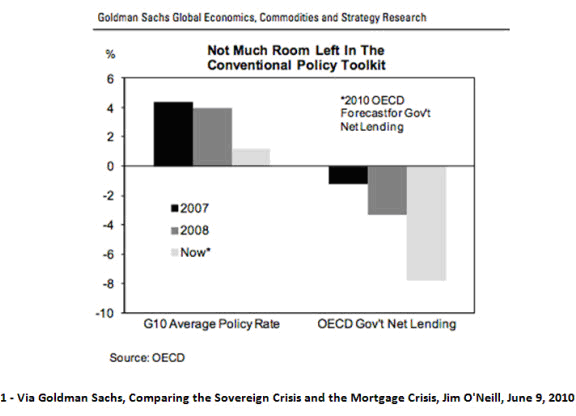 Interest rates in the top 10 economic nations are hovering just above zero, and it's not like they can go any lower than that, as much as banks would welcome having to pay back less than they borrow.

Government debt is meantime spiraling from out-of-control to just plain ridiculous. And all at a time when revenues are dropping from the slowdown and creditors, having been burned a little by Greece and afraid of what's to come with Spain, Italy, Ireland, California, New York, and others, are starting to raise red flags to the borrow-and-spend policies of our collective governing bodies.

For the first time in a long time, developed governments in Europe and the US face the specter of sub-AAA credit ratings and rapidly rising costs of borrowing more (ratings that, frankly, had they been put in place by the inept agencies years ago when they were initially deserved may have had repercussions that would have helped us avoid many of today's problems). Between rising borrowing costs, the already hefty budgetary burden of paying prior debt interest, and the ever-expanding rolls of government employees, legislators can hardly keep up on the bills these days, let alone inject any more into the economy.

The irony, of course, is that by unloading a full clip from the assault rifle when trying to "save" the economy, the governments of the OECD nations have actually created a catch-22 situation. One wherein they not only have no tools left to manipulate the markets against a further slowdown, but also where they have created monetary policy so extreme that undoing it would be more disastrous than the fallout would have been had they not intervened in the first place.

Austerity budgets from Greece and Spain have included massive layoffs of government rank and file, severe wage cuts, or both, potentially reducing tax revenues and consumer spending. California is following suit with its proposed 23,000 teacher layoffs, which are arriving on the back of 30,000 previous layoffs just last year. New Jersey is furloughing tens of thousands of state workers and capping raises. NY is furloughing 100,000 more and needs to cut $9.2 billion from the budget still.

As the walking bankrupt states and cities continue their budget slashing – down from criminally high levels such as Miami, where the average city worker nets $76,000/year compared to the $29,000 average for private citizens of the metropolis – it will only exacerbate the returning slowdown. Fewer households with cash to spend in the private sector. Rising mortgage defaults and foreclosures as the workers face the grim reality that a state paycheck doesn't come with a 30-year guarantee these days. Declining tax revenues at all levels. And more people on the already busting-at-the-seams federal unemployment files, which remain at all-time highs.

Speaking of the US federal government, their guaranties of Fannie and Freddie Mac loans are now estimated to cost anywhere from $250 billion to $1 trillion to taxpayers in the end, far above the net cost of any of the other bailout measures and potentially more than is possible to pay. The price tag is so steep, many conservatives are starting to call for repealing the institutions' charters altogether and letting the private market have at them. The US federal government is simply buried over its head in obligations.

The government is all tapped out. And yet the economy continues to slow.

If you are among the camp who wished the government would have never stepped in to begin with and called out the seemingly obvious truth that they could only worsen the situation by flailing so wildly to contain it – the double dip is coming, and you are about to be proven right and get your wish at the same time.

It's the price we are all about to pay for letting our politicians get away with budgetary murder year after year, including letting them try to "save" us the last time around.

How best to buy gold today? Make it simple, secure and cost-effective by using BullionVault...