END_OF_DOCUMENT_TOKEN_TO_BE_REPLACED

Eurozone crisis is masking the dangers of the US Dollar...
In THE PAST (even the recent past) investors have often 'parked' their funds in a 'safe-haven' currency, writes Julian D. W. Phillips at The Gold Forecaster, when fears about the Dollar or other currencies rose.
The leading candidates have always been the Swiss Franc and the Yen, with gold, in the last three years usually being excluded because of its declining trend against the Dollar and the limited amount of stock relative to the availability of these currencies.
While gold's trend seems to have changed to the upside now, the developed world is still 'out of gold'. But then, gold has never forfeited its role as a 'safe-haven' for long.
Gold is distinguished by the fact that there is no lasting link between gold and national governments and their national currencies. What gold has always had is the respect and the belief that it is money 'in extremis'. For governments, through institutions to individuals, gold is always money, even between enemies.
In the last 40 years and more, the world led by the US, has sought to sideline gold as money, but inevitably it has proved its worth, most notably when currency crises appear. The success the Dollar has had in these four decades has been largely due to two factors:
But as 2014 closed and a volatile, dramatic 2015 entered our lives, this is changing.
With oil at less than half its peak value today, only half the Dollars that were used in the past for oil are being used now. Add to this that payments for oil in currencies other than the Dollar, particularly by China, are being made.
This is massively reducing the need for the Dollar, globally. All theses excess Dollars will become redundant, but the impact of this has yet to be seen or appreciated.
With the Euro crises throwing a smokescreen over the Dollar picture, as Euros are exchanged for the US Dollar or through the 'carry trade' borrowed and sent into high yielding emerging market currencies, the Dollar looks as though it is a strong currency.
Markets, market players and commentators tend to be myopic, focussed on short-term profits and only distracted when larger issues actually arrive. This is what's happening now.
We feel that what is happening now on foreign exchanges is an early signal of much bigger issues that will appear in the next couple of years.
The Yen hit its peak when it stood at 76 to the US Dollar before Japan's leading source of energy (nuclear) was discarded and replaced by imported fuel. 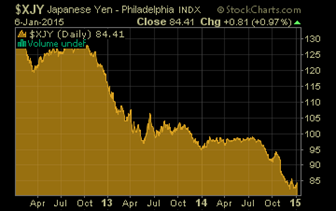 As Japan's population ages and spending habits become conservative, the real function of a currency has become apparent. It is used to allow the local economy to function smoothly as the only local means of exchange. Internationally, it is used as a basis for international trade and investment. As such, it functions well when the economy and balance of payments is healthy.
But when the balance of payments and the economy fail to function well, it hurts the international value of the currency as we have seen as Abenomics kicked in to lead Japan and the Yen into the future. 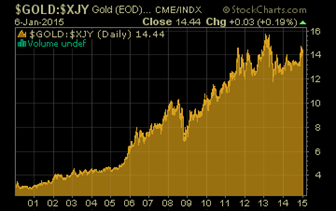 More importantly it now defines the trade competitiveness of the nation. Hence, the exchange rate itself, inevitably, is managed to the nation's benefit and not that of its citizens or its own integrity. Its integrity as a measure of value has been abandoned alongside its role as a 'safe haven'.
While the G-20 agreed that nations would not purposely weaken their exchange rates, the stark realities of today have overwhelmed these commitments and will continue to do so 'where deemed necessary'.
Translated, that means it is now okay to weaken ones currency in the interests of the nation's export competitiveness. As most currencies follow this line and enter into the 'race to the bottom', any advantage to a nation becomes short-term as the one against whom the advantage was gained then does the same.
Today's exchange rate of the Yen is 118 to the Dollar, a 55% fall from its recent peak. This fall is far bigger than the fall in the Ruble, albeit the Yen fell over a longer period of time. The fact that it has taken longer is okay as it can be absorbed in trade over that time. This makes the policy more palatable?
The consequences of such myopia will focus on confidence. Confidence is the only ingredient that makes a currency viable and a quality that if lost takes a currency with it.
Hence the Yen is no longer a currency 'safe-haven'.
The Swiss Franc has been a hallowed currency 'safe-haven' for generations, consistent with the earned image of Switzerland as a 'safe-haven' for foreigners assets and a nation that will fight to protect these investors. The events of the last three years have cost the Swiss dearly wiping out the confidence it had gained over the previous century. As of now, at least 10% of the Swiss economy depends upon the banking/asset management industry built up over this time.
But the rest of the economy doesn't rely on this image. As a world-respected manufacturer, Switzerland needs an exchange rate that supports its international trade competitiveness, most importantly against the Euro, its main trading partner. 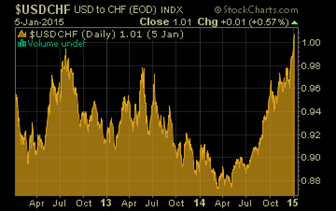 One would have thought that the two aspects of the Swiss economy could co-exist together easily. But when pressure on the global monetary system mounts, they can't.
The pressure on the Swiss Franc has been heavy in the last three years when the Swiss National Bank (SNB) took severe action to hold the 'Swissy' to Euro at a ceiling of 1.20 to guard Switzerland's exchange rate against the Euro without even contemplating the possibility that the world's second most important currency could weaken so dramatically and so quickly from its peak against the Dollar.
The pressures proved too much last week and to the great surprise of the whole world the 'Swissy' was unpegged! As we look around at the damage the Swiss National Bank caused by 'unpegging' from the Euro and now linking it to a 'trade weighted basket of currencies', including the US Dollar, we see once more, national interests elevated far above those of the people using the 'Swissy' both inside and out of Switzerland.
Perhaps you are thinking that the 'Swissy' can once more serve as a 'safe-haven' currency. A look at the intentions of the SNB in now linking the Swissy to the 'basket of currencies', is to keep the Swiss Franc down against them. This means that the SNB will continue to intervene in the foreign exchanges and hold it down against these other currencies.
So it will not return to 'safe haven' status, as we are now seeing in the market place as it slowly slips down against gold and other currencies. In addition, the Swiss National Bank has imposed an interest rate of minus 0.75% on sight deposit account balances at the SNB. In an effort to relieve the upward pressure on the Swiss Franc, from 22 January the SNB will charge an interest rate of 0.75% on account balances above a certain threshold held with it by banks and other financial institutions. But will this work? 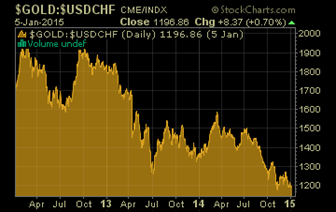