END_OF_DOCUMENT_TOKEN_TO_BE_REPLACED

Is there a copper shortage ahead...?

LAST MONTH'S landslide at Utah's Bingham Canyon, one of the world's largest copper mines, triggered significant discussion on possible copper shortages. Brent Cook, veteran geologist and publisher of Exploration Insights, puts the landslide into perspective in this interview with The Metals Report. And for investors who want to dig out profit potential beyond investing in gold, Cook gives us a byproduct primer and suggests base metals are a great way to diversify.

The Metals Report: In April, a landslide shut down operations at one of the largest copper mines in the world, the Bingham Canyon mine. Thankfully, no one was injured. Are landslides always a threat at large, open-pit mines? Will this change the standards for how mines are built and their size?

Brent Cook: Landslides and rock falls are always an issue in open pits, and companies put a lot of effort into understanding the rock mechanics in order to build these mines and pits properly. They generally are not a major problem if sufficient upfront studies are done. The Bingham pit was opened in the early 1900s and has been expanding since then. While the slide is a major event, I do not think it will change how anyone builds mines per se.

TMR: Will this make it tougher for that mine to undergo another expansion, or another of similar size, to expand?

Brent Cook: What happened at Bingham should not affect other mines of that size. I imagine the company is going through a lot of engineering analysis and trade-off studies to figure out what exactly it has to do at Bingham this year and over the next decade.

As you can see from the photo [below], this was a major landslide. I've worked at Bingham, so I know it real well. The mine produces about 400,000 ounces of gold and 430,000 tons of copper annually but I would guess there's enough ore stockpiled to last several weeks. 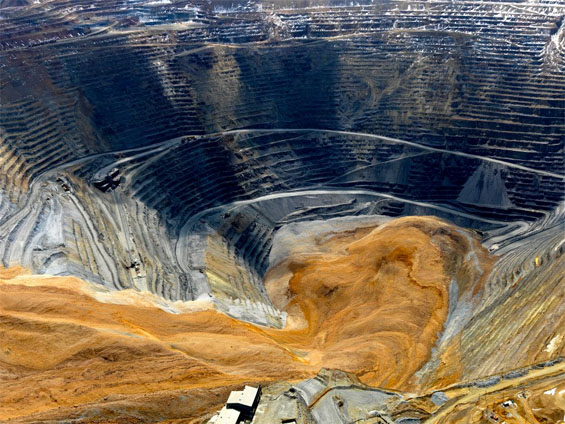 The slide represents close to 165 million tons (165 Mt) of rock that will need to be moved out eventually—the equivalent of moving a whole mine. The company hasn't released specific plans so I don't know how much, if any, of the slide material would go to the ore pile versus waste. As I recall, they had plans to go underground.

TMR: You think it will go underground instead of expanding the open pit?

Brent Cook: No, the underground mine was to be sequenced in and the open pit continued or expanded. But now that has to be one of the options being considered.

TMR: I understand that mine produced 25% of US total supply. How will that affect the copper market dynamics?

Brent Cook: Not all that much, really. There is a lot of copper sitting in Chinese and London Metal Exchange warehouses. In terms of the global copper market, this mine represents only about 1%, but close to 25% of the US market.

TMR: Copper is considered an economic indicator. Is the fact that prices have dropped from $3.70/pound ($3.70lb) in January to $3.10/lb in April an indicator that the world's economies are not recovering? Or is there just too much copper in the market right now, sitting in warehouses as you mentioned?

Brent Cook: That is a tough call. Copper has always been considered an indicator of future economic stability and growth. But in the past decade, speculators have taken heavily to buying and selling copper. I don't think anyone really knows how much copper is being hoarded in China as an investment, or for pure speculation. I have seen photos published by Standard Chartered Bank showing copper overflowing warehouses and filling parking lots. I think power consumption is probably a better indicator of economics these days than copper, but we will see.

Brent Cook: I do not really like to make those sorts of predictions because I am relying on data of varying quality published by people with a variety of agendas. I suppose I have a 50/50 chance of getting the direction right, but I still seem to miss more often than I should. In my mine models, I am keeping copper at a steady $3/lb. I see my job as laying out the technical data as best I can and leave it at that; I prefer to let my subscribers plug in their own optimistic or pessimistic numbers based on how they see the future.

Predicting short-term copper demand versus supply is only useful for long-term investors in this sector to the degree that it points out mispriced equities. You really need to consider what demand will be 2, 5, 10 or 20 years out. That is because it takes at least seven and upwards of 20 years to find and bring a new copper mine into production. I base my investments on what is happening further down the line, which, hopefully, allows me to recognize underpriced assets.

TMR: Does it cost more to mine copper now, as the easy copper is going away?

Brent Cook: Operating costs are going up considerably. I am not sure of the average production cost of copper, but I would assume it is in the $2–2.50/lb range.

Brent Cook: Yes, all-in costs. If the copper price started dropping below $2.75 or $2.50/lb, a lot of miners would be in big trouble because operating costs will exceed the price they can get. That would take a lot of copper offline. That built-in mechanism of price support will eventually kick in.

When looking at the copper price, supply and demand, you really must consider the time it takes to bring a large mine into production, the very high capital expenditures, and the real likelihood that a number of projects in the works will not get built. I think in the long term, we are facing a supply shortage.

TMR: Because copper is often a byproduct of gold mining, sometimes companies will mine copper whether the supply-demand equation is there or not. How does a polymetallic ore change the prospects for projects?

Brent Cook: More often than not, one of the byproducts of a copper mine is gold. A good copper mine like Bingham produces 0.4 Moz gold as a byproduct and somewhere near 3 Moz silver annually. Those are economically important byproducts of the copper mine. When you are evaluating the economics of a porphyry copper deposit, the price of those two metals enters into the equation. It is very important.

Likewise, in a polymetallic metals deposit, copper, lead, zinc, gold and silver all flow into the stream. It takes different processing methods to recover those. With most types of polymetallic deposits, miners produce a few different concentrates and send them off to a smelter.

TMR: Does how a mine is labeled (gold with copper credit or copper with gold credit) depend more on the makeup of the ore body or how the company wants to market the mine?

Brent Cook: When you are looking at a base metal deposit like a porphyry copper deposit or a volcanogenic massive sulphide deposit (VMS), the gold and silver are generally byproducts. The degree to which they factor into an economic valuation depends on the grade and recovery as well as the ultimate value they add to the operation. It depends on the deposit itself what the important metal is.

Typically, with a silver deposit, miners will recover lead and zinc as well, both important byproducts that can often account for half the value received from the sale of concentrate. Pure silver deposits are fairly rare.

TMR: Do you have any final advice on investing outside of gold for people looking to protect themselves?

Brent Cook: In the mining and exploration sector, it is really important to know what you are buying, why you are buying it and what your expectations are. Then, you have to keep track of whether your expectations are met or not. If they are not met, it is time to sell. Too many people hold on and their investment thesis turns to hope, just hoping something good will happen so the share price goes up. That has never worked for me.

TMR: That sounds like great advice, Brent. Thanks for your time and your insights.