END_OF_DOCUMENT_TOKEN_TO_BE_REPLACED

With central bankers run amok, diversification makes more sense than ever...
"MUTUALLY assured destruction" was a doctrine that rose to prominence during the Cold War, writes Tim Price on his blog, ThePriceOfEverything.
The US and the USSR faced each other with nuclear arsenals so populous that they ensured that any nuclear exchange between the two great military powers would quickly lead to mutual overkill in the most literal sense.
Notwithstanding the newly dismal relations between the US and Russia, "mutually assured destruction" now best describes the uneasy stand-off between an increasingly indebted US government and an increasingly monetarily frustrated China, with several trillion Dollars' worth of foreign exchange reserves looking, it would now appear, for a more productive home than US Treasury bonds of questionable inherent value.
Until now, the Chinese have had little choice where to park their trillions, because only markets like the US Treasury market (and to a certain extent, gold) have been deep and liquid enough to accommodate their reserves.
An FT article by James Kynge and Josh Noble points to three related policy developments on the part of the Chinese authorities:
The US has long enjoyed what Giscard d'Estaing called the "exorbitant privilege" of issuing a currency that happens to be the global reserve currency. The FT article would seem to suggest that the days of exorbitant privilege may be coming to an end – to be replaced, in time, with a bi-polar reserve currency world incorporating both the US Dollar and the renminbi.
The Euro might be involved, if that demonstrably dysfunctional currency bloc lasts long enough.
Here's a quiz we often wheel out for prospective clients:
Three questions. One answer, in each case: China.
Is it plausible that, at some point yet to be determined, a (largely gold-backed) Renminbi will either dethrone the US Dollar or co-exist alongside it in a new global currency regime? We think the answer is yes, on both counts.
Meanwhile the US appears to be doing everything in its power to hasten the relative decline of its own currency. There is a new 'big figure' to account for the size of the US national debt, which now stands at some $18 trillion.
That only accounts for the on-balance sheet stuff. Factor in the off-balance sheet liabilities of the US administration and pretty soon you get to a figure (un)comfortably north of $100 trillion. It will never be paid back, of course. It never can be. The only question is which poison extinguishes it: formal repudiation, or informal inflation. Perhaps we, or future generations, get both.
So the direction of travel of two colossal 'macro' themes is clear – the insolvency of the US administration, and its replacement on the geopolitical and currency stage by that of the Chinese.
The one question neither we, nor anybody else, can answer precisely is: When?
There are other statements that beg the response: when? Government bond yields have already entered a 'twilight zone' of practical irrelevance to rational and unconstrained investors.
But when do they go into reverse? When will the world's most frustrating trade ('the widow-maker', i.e. shorting the Japanese government bond market) start finally to work? When will investors be able to enter or re-enter stock markets without having to worry about the malign impact of central bank price support mechanisms (a polite way of describing asset price boosterism and state-sanctioned inflationism)?
Here's another statement that begs the response, "When?" The US stock market is already heavily overvalued by any objective historical measure. When is Jack Bogle, the founder of the world's largest index-tracking business, Vanguard, going to acknowledge that advocating 100% market exposure to one of the world's most expensive markets, at its all-time high, might amount to something akin to "overly concentrated investment risk"? Barron's magazine asks broadly the same question.
Lots of questions, and not many definitive answers. Some suggestions, though:
At the asset class level, diversification – by geography, and underlying asset type – makes more sense than ever, unless you strongly believe you can anticipate the actions and intentions of central banking bureaucrats throughout the world.
Warren Buffett once said that wide diversification was only required when investors do not understand what they are doing. We would revise that statement to take into account the unusual risks at play in the global macro-economic arena today. Wide diversification is precisely required when central bankers do not understand what they are doing.
Expanding on the diversification theme, explicit value ("cheapness") today only exists meaningfully in the analytically less charted territories of the world. @RobustCap highlights the discrepancy between valuations in the US stock market versus those of Russia, China and emerging Europe. There are clearly 'fundamental' and corporate governance reasons that account for some of this discrepancy, but in our view certainly not the entirety of it.
Some examples of stock-market price to book value, the cyclically adjusted price-to-earnings ratio, and the current price/earnings ratio: 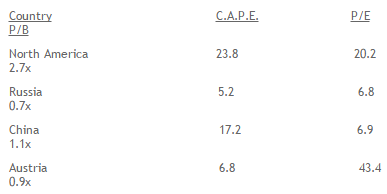 In emerging and 'challenged' markets, there are always reasons not to invest. Nevertheless, price is what you pay and value is what you get.
Some form of Renminbi exposure makes total sense as part of a diversified currency portfolio. US equities should be selected, if at all, with extreme care; ditto the shares of global mega-cap consumer brands, where valuations point strongly to the triumph of the herd. And whatever their direction of travel in the short to medium term, US Treasuries at current levels make no sense whatsoever to the discerning investor.
The same holds for Gilts, Bunds, JGBs, OATs. Arguments about Treasury yields reverting to a much lower longer term mean completely ignore:
Foreign holders of US Treasuries, you have been warned. The irony is that many of you are completely price-insensitive so you will not care.
There are other reasons to be fearful of stock market valuations, notably in pricey western markets, over and above concerns over the debt burden. As Russell Napier points out in his latest 'The Solid Ground' piece,

"In 1919-1921, 1929-1932, 2000-2003, 2007-2009 it was not a resurgence in wages, Fed-controlled interest rates or corporate taxes which produced a collapse in corporate profits and a bear market in equities. On those four occasions equity investors suffered losses of 32%, 85%, 41% and 51% respectively despite the continued dormancy of labour, creditors and the state. It was deflation, or the fear of deflation, which cost equity investors so much. There is a simple reason why deflation has always been so damaging to corporate profits and equity valuations: it brings a credit crisis.
"Investors forget at their peril what can happen to the credit system in a highly leveraged world when cash-flows, whether of the corporate, the household or the state variety, decline. In a deflationary world credit is much more difficult to access, economic activity slows and often one very large institution or country fails and creates a systemic risk to the whole system.
"The collapse in commodity prices and Emerging Market currencies in conjunction with the general rise of the US$ suggests another credit crisis cannot be far away. With nominal interest rates already so low, monetary remedies to a credit seizure today would be much less effective. Such a shock, after five and a half years of QE, might suggest that the patient does not respond to this type of medicine."

And since Christmas fast approaches, we can't speak to the merits of frankincense and myrrh, but gold, that famous "6,000 year old bubble", has always been popular, but rarely more relevant to the investor seeking a true safe haven from forced currency depreciation and an ever vaster mountain of unrepayable debt.
Happy holidays.