END_OF_DOCUMENT_TOKEN_TO_BE_REPLACED

That was the first such time it has done so since the summer, when Brexit-fueled uncertainty shook world markets.

By the end of February 2017, the yellow metal had advanced close to 9%, cracking the $1260 an ounce ceiling on Monday for the first time since soon after the November election. Compared to the same number of trading days last year, gold was up 15%.

Lately we've seen money managers and hedge funds increase their net long position on gold. This is impressive considering that equities are still holding strong and regularly hitting new highs. As of February 27, the Dow Jones Industrial Average was up for 12 straight days, a winning streak we haven't seen in 30 years.

Gains in the large-cap index have been led by plane-maker Boeing, which stands to benefit "big league" from President Donald Trump's proposal to boost military spending 10%, or $54 billion, announced yesterday.

Money managers' bullish bet on gold at this time shows that the precious metal continues to hold an important place in most investors' portfolios. Over the past 10 years, gold has shown little to no correlation with blue-chip or small-cap stocks, making it an exceptional diversifier for investors who might fear stocks have risen too much, too fast, and are due for a pullback.

In a note last week, UBS analyst Joni Teves said as much, writing that "gold interest on the back of diversification and hedging reasons are likely to be resilient as uncertainty and political risks linger." 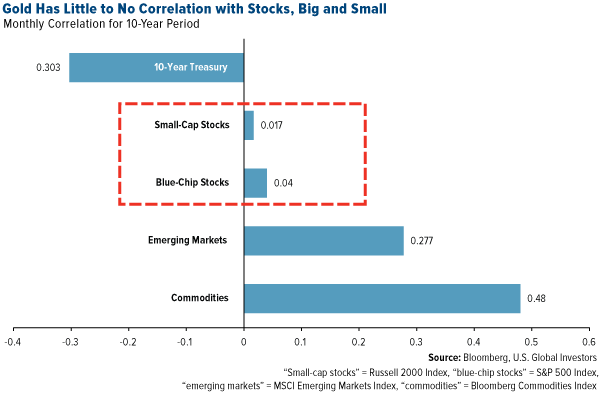 Gold's well-known diversification benefits are among the reasons that prompted Islamic finance policymakers to develop the Shari'ah Standard on Gold, unveiled in December 2016, which finally opens up the precious metal as an investment tool in the global $1.88 trillion Islamic finance industry.

Before now, there were no Shari'ah-compliant investment products that could be considered "safe havens". Permitting gold-backed funds into the universe of allowable investments changes that.

More recently, the governor of Kyrgyzstan's central bank, Tolkunbek Abdygulov, expressed his "dream" to see all 6 million citizens of the Central Asian country own at least 100 grams, or 3.5 ounces, of physical gold.

Speaking to Bloomberg, Abdygulov said that the metal "can be stored for a long time and, despite the price fluctuations on international markets, it doesn't lose its value for the population as a means of savings...

"We are hopeful that our country's population will learn to diversify its savings into assets that are more liquid and – more importantly – capable of retaining their value."