END_OF_DOCUMENT_TOKEN_TO_BE_REPLACED

The world is facing hard times, no matter what the government does...

IT'S BECOME CLEAR in the last month that the current financial meltdown is not any kind of usual, run-of-the-mill crisis, writes Oliver Garret, CEO of Casey Research.

This crisis is supersized, because it's inexorably linked to the rest of the world. Ruled by chaos, it's also precariously perched atop a mountain of debt.

"What makes this crisis different from some of the earlier ones," says James Boughton, historian at the International Monetary Fund (IMF), "is that the interlinkages among financial institutions are much greater now than they used to be."

Daily efforts to "thaw credit markets...provide liquidity...and support financial stability" only add to the myriad market dislocations. And despite what we may hear from politicians and the news media, recovery is unlikely to be "just around the corner."

The party really is over. We are facing hard times, no matter what the government does. If it continues to prop up the sick markets, it will only delay and worsen the inevitable deep recession.

To survive the current financial crisis and the accompanying economic downturn, we must understand the big picture, and how it will be affected by the slew of "support" from the federal government.

Casey Research accurately predicted the specifics of the crisis in its International Speculator edition of March 2007:

"For one thing, at the point that falling prices leave homeowners with mortgages exceeding the value of their homes, default rates will soar. This, in turn, will put lenders that hold large amounts of mortgage debt at risk, and possibly jeopardize the solvency of Fannie Mae and Freddie Mac, since they guarantee much of this debt.

"If these mortgage giants faced collapse – and they are already in well-documented trouble – a government bailout involving hundreds of billions of dollars would be a likely next step.

"The impending calamity – mass housing foreclosures, failing banks, Fannie Mae and Freddie Mac in ashes, millions of personal bankruptcies – is so dire… most people can't even conceive of it. And indeed it may not hit us this year, or next, but the market always corrects itself, and this time will be no exception, sooner or later."

We have said before, and we repeat again: Rig for stormy weather. Now the Casey Research team forecasts something outside the realm of any recent experience: the Greater Depression may be looming on the horizon.

Doug Casey coined the term "Greater Depression" in his best-selling book Crisis Investing, published in 1979. Today it resounds throughout the land; even CNN's Glenn Beck recently used it in an op-ed piece. And the signs are increasing that a depression may indeed be what we are moving towards.

On September 30, 2008 – the end of fiscal-year 2008 – the Congressional Budget Office reported a record US federal budget deficit of $455 billion, up $293 billion (or 181%) from fiscal 2007. And that does not yet include the Fed's bailout package for failing banks, Fannie Mae and Freddie Mac, and various other "economic stimuli".

What's more, the $700 billion agreed to by Congress may have been a very optimistic estimate. 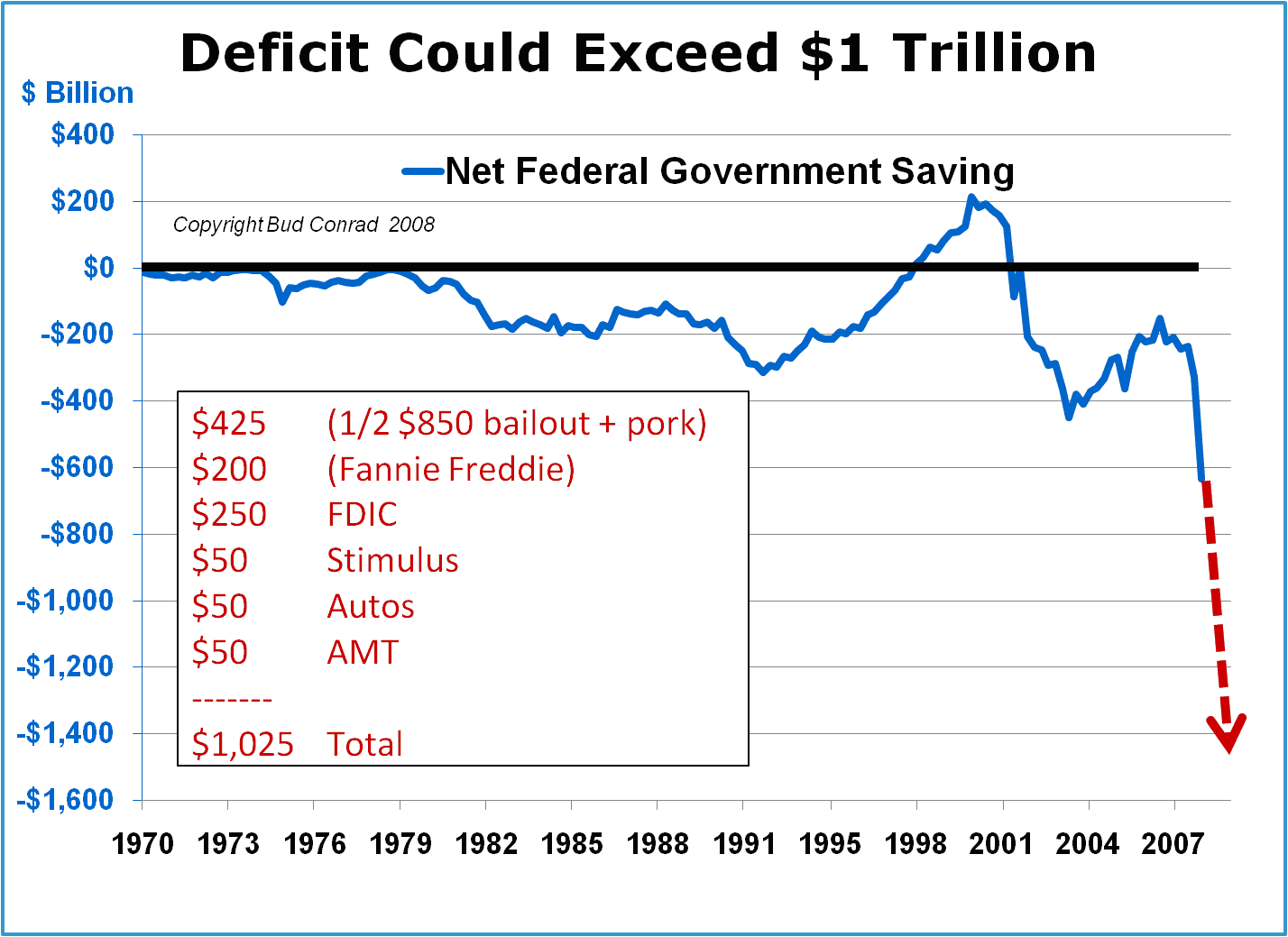 On October 3, President Bush signed into law the Emergency Economic Stabilization Act of 2008. With this Act, Congress and the president have ensured a runaway government deficit next year...one sure to exceed $1 trillion.

Along with total federal debt outstanding already around $10.3 trillion, unfunded liabilities of at least $50 trillion, and many new programs and tax rebates promised by both presidential candidates, this does not bode well for the global economic outlook.

As if that was not enough, during the past few weeks, the Fed increased the country's monetary base by as much as 20% to shore up the financial systems.

Federal budget deficits facilitate "loose" (expansionist) monetary policies, and these policies set in motion the business cycle. As the economy enters the cycle's "bust" phase, massive federal deficits have left the government with only one option – to try to inflate itself out of the current crisis, regardless of the impact on the value of the Dollar.

A rapidly growing money supply at the same time the biggest credit bubble in 25 years bursts makes for a less than desirable scenario – one that could make the stagflation of the '70s look like a walk in the park. In March 1975, industrial production fell by nearly 13% while the yearly rate of Consumer Price inflation (CPI) jumped to around 12%. It took another seven years and a second recession before the US was able to break from the stagflation cycle.

What we are likely in for now is an unprecedented period of price inflation, economic depression, and high unemployment – i.e. not just stagflation, but depflation, meaning an inflationary depression.

Depflation will affect the entire population, and its effects on people's personal finances will manifest in multiple ways.

Just like a shot of adrenalin administered to a sick patient generates an apparent revival, only to have the patient collapse as soon as the injection wears off, the artificial monetary injections by the Fed will do the same.

Paraphrasing former Fed chairman Paul Volcker, "Once you have a little [monetary] inflation, you need a little more". As with any medicine, its effects wear off and become less potent the more "injections" are received.

At this stage, your primary goal should be asset protection. Once that is in place, you will be in a better position to hunt for the opportunistic profits one can only find in times of crisis.