END_OF_DOCUMENT_TOKEN_TO_BE_REPLACED

In RECENT MONTHS, worshippers at the altar of Keynes have been hyperventilating over the possibility Congress will run a deficit of "only" $1.5 trillion in 2010, writes James Quinn, contributor to The Casey Report, head of strategic planning at a US business school, and host of TheBurningPlatform.com blog.

They have issued dire proclamations about a replay of the 1937-1938 Depression within the Great Depression. White House favorite and No.1 Keynesian on the planet, Paul Krugman, declared that not borrowing an additional $100 billion to hand out to the unemployed for another 99 weeks would surely plunge the country into recession again:

"Suddenly, creating jobs is out, inflicting pain is in. Condemning deficits and refusing to help a still-struggling economy has become the new fashion everywhere, including the United States, where 52 senators voted against extending aid to the unemployed despite the highest rate of long-term joblessness since the 1930s.

"Many economists, myself included, regard this turn to austerity as a huge mistake. It raises memories of 1937, when FDR's premature attempt to balance the budget helped plunge a recovering economy back into severe recession."

So did Roosevelt's attempt to balance the budget in 1937 cause the second major downturn in 1938? I'm a trusting soul, but I prefer to verify what is being peddled to me by any economist, especially Paul Krugman.

Today's Keynesian economists have convinced boobus Americanus that the Great Depression was caused by the Federal Reserve being too tight with monetary policy and the Hoover administration not providing enough fiscal stimulus. Ben Bernanke and Barack Obama used this line of reasoning to ram through an $850 billion pork-laden stimulus package, as well as the purchase of $1.2 trillion of toxic mortgages by the Federal Reserve.

The only trouble is that this storyline is a complete sham.

The fact that colossal stimulus spending, zero interest rates, the purchase of over a trillion in toxic assets by the Fed, and the loosest monetary policy in history have done absolutely nothing to revitalize the economy, has proven that Keynesian policies have been a wretched failure. This is not a surprise to Austrian school economists.

Keynesian policies failed during the Great Depression, and they are failing today. An economic catastrophe caused by loose monetary policies, crushing levels of debt, and appalling lending practices cannot be solved by looser monetary policies, issuance of twice as much debt, and government commanding banks (or, in the case of Fannie and Freddie, "commandeering") to make more bad loans.

Ludwig von Mises described what happened in the 1920s and 1930s. His explanation accurately illustrates the situation in America today.

"There is no means of avoiding the final collapse of a boom brought on by credit and fiat monetary expansion. The only question is whether the crisis should come sooner in the form of a recession or later as a final and total catastrophe of depression as the currency systems crumble."

The Federal Reserve increased the money supply by 60% during the period following the recession of 1921. By the latter part of the decade, "buying on margin" entered the American vocabulary as more and more Americans overextended themselves to speculate on the soaring stock market.

The 1920s marked the beginning of mass production and the emergence of consumerism in America, with automobiles a prominent symbol of the latter. In 1919, there were just 6.7 million cars on American roads. By 1929, the number had grown to more than 27 million cars, or nearly one car for every household. During this period banks offered the country's first home mortgages and manufacturers of everything – from cars to irons – allowed consumers to pay "on time". Installment credit soared during the 1920s. About 60% of all furniture and 75% of all radios were purchased on installment plans. Thrift and saving were replaced in the new consumer society by spending and borrowing.

Encouraging the spending, the three Republican administrations of the 1920s practiced laissez-faire economics, starting by cutting top tax rates from 77% to 25% by 1925. Non-intervention into business and banking became government policy. These policies led to overconfidence on the part of investors and a classic credit-induced speculative boom. Gambling in the markets by the wealthy increased. While the rich got richer, millions of Americans lived below the household poverty line of $2,000 per year. The days of wine and roses came to an abrupt end in October 1929, with the Great Stock Market Crash.

Between 1929 and 1932, the market fell 89% from its high. The Keynesian storyline is that Herbert Hoover's administration did nothing to try and revive the economy. It took Franklin Delano Roosevelt and his New Deal Keynesian policies to save the country. It's a nice story, but completely false. Between 1929 and 1933, when Roosevelt came to power, the Hoover administration increased real per-capita federal expenditures by 88%, not exactly austere.

When examining the BEA chart of GDP from 1929 to 1939, some fascinating similarities with today's economy leap out. In 1929, consumer expenditures accounted for 72.3% of GDP, confirming that the much-commented-upon American consumerism is not a modern development. In fact, consumer spending peaked at 81% of GDP in 1932 and remained above 70% during the entire depression.

By 1950 consumer expenditures had subsided to 64% of GDP. In 1960, they had fallen to 63% and edged up to 64% by 1970, where they remained until 1980. By 1990 they had ticked up to 66% and by 2000 had reached 68%. The modern-day climax appeared to many to have been reached in 2007 at 70% of GDP. But in a replay of the New Deal playbook, where much of the consumerism was funded by make-work projects and federal transfer payments, the federal government has thrown billions of Dollars at consumers to buy houses, cars, and appliances. Consumer expenditures as a percentage of GDP actually rose to 71% in 2009. It should be readily apparent that until consumer expenditures are narrowed to a level that leads to a sustainable balanced economy, the current depression will continue indefinitely.

By contrast, government expenditures surged by 46% between 1929 and 1936. With the government creating agencies and hiring people into make-work projects, private industry was crowded out. The extensive governmental economic planning and intervention that began during the Hoover administration was expanded significantly under Roosevelt. The bolstering of wage rates and prices, expansion of credit, propping up of weak firms, and increased government spending on public works prolonged the Great Depression. 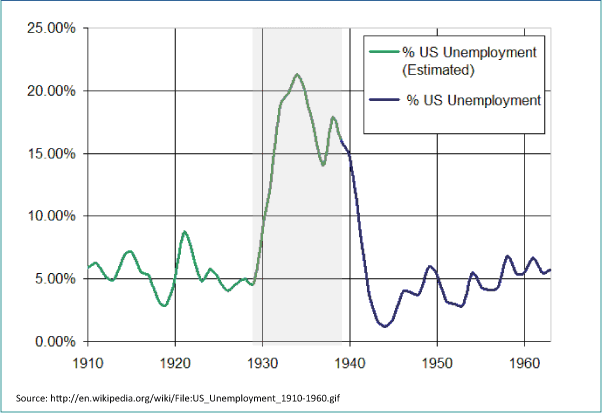 The evidence strongly contradicts the notion promoted by Krugman and other Keynesian worshippers that the supposed 1937-38 Depression within the Great Depression was caused by Roosevelt becoming a believer in austerity. In fact, GDP only dropped by 3.5% in 1938 and rebounded by 8.1% in 1939. What actually collapsed in 1938 was private investment, which fell 34%.

By contrast, government spending declined by only 4.5% in 1938, confirming that Roosevelt did not slash spending. To the extent that he eased up on the accelerator, it was by cutting back on jobs programs like those provided by the Works Progress Administration and the Public Works Administration. 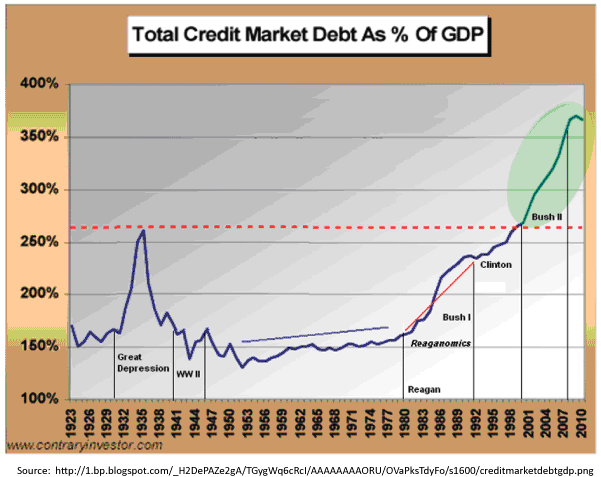 This storyline is a big lie.

The Great Depression was caused by Federal Reserve expansion of the money supply in the 1920s that led to an unsustainable credit-driven boom. When the Federal Reserve belatedly tightened in 1928, it was too late to avoid financial collapse. According to Murray Rothbard, in his book America's Great Depression, the artificial interference in the economy was a disaster prior to the depression, and government efforts to prop up the economy after the crash of 1929 only made things worse. Government intervention delayed the market's adjustment and made the road to complete recovery more difficult.

The parallels with today are uncanny. Alan Greenspan expanded the money supply after the dot-com bust, dropped interest rates to 1%, encouraged a credit-driven boom, and created a gigantic housing bubble. By the time the Fed realized they had created a bubble, it was too late. The government response to the 2008 financial collapse has been to expand the money supply, reduce interest rates to 0%, borrow and spend $850 billion on useless make-work pork projects, encourage spending by consumers on cars and appliances, and artificially prop up housing through tax credits and anti-foreclosure programs. The National Debt has been driven higher by $2.7 trillion in the last 18 months.

The government has sustained insolvent Wall Street banks with $700 billion of taxpayer funds and continues to waste taxpayer money on dreadfully run companies like Fannie Mae, Freddie Mac, General Motors, and Chrysler. The government is prolonging the agony by not allowing the real economy to bottom and begin a sound recovery based on savings, investment, and sustainable fiscal policies. President Obama continues to scorn business by creating more burdensome healthcare, financial, and energy regulations.

Today's politicians and monetary authorities have learned the wrong lessons from the Great Depression. The result will be a second, Greater Depression and more pain for the middle class. The investment implications of government stimulus programs are further debasement of the currency and ultimately inflation and surging interest rates. Owning precious metals and mining stocks, and shorting US Treasuries will pay off over the next few years.