END_OF_DOCUMENT_TOKEN_TO_BE_REPLACED

Hidden depression in 73% of counties...

The DAVOS crowd was told that the world economy is minting one new billionaire every two days, writes Bill Bonner in his Diary of a Rogue Economist, reporting from Baltimore.

Eighty-two% of the world's wealth generated last year went to the "One Percent".

That leaves 18% for the bottom 99%. Many of the 99%ers must have gotten nothing at all...or less than nothing.

Numbers are always a little squirrely. Give them a bribe or threaten them with violence, and they'll say practically anything.

But, spontaneously, more and more numbers are coming forth and bearing witness against a fraudulent economy.

They tell us that the feds' GDP calculations are not to be trusted...

Looking at the economic picture in the US, we are meant to see happy people getting richer, with a bubbly stock market, low consumer price inflation, and jobs for whomever wants one.

That is the picture the news media, the financial press, Wall Street, and the Trump administration draws.

But what we see is claptrap. The dots don't connect.

In a labor pool with barely any increase in average wages, if some wages are going up, other wages must be going down.

And in a country where growth is concentrated in a few urban-suburban conglomerates – Washington DC, New York, San Francisco – there must be a lot of places where people are not drinking cappuccinos, sending their children to private schools, or listening to NPR.

In the bottom half of the US population, 117 million adults earn an average annual wage of $16,000 a year.

But we'll let you draw your own conclusion.

We asked our research department, headed by the able Joe Withrow, to comb through the US, county by county, and tell us where people were better off...and where they weren't.

His report can be read in full here. You should read it. The assumptions and analytical methods he used are important.

In addition to the expected evidence came a revelation: GDP growth is largely counterfeit.

We'll get to that in due course...

First, here are the highlights of Joe's report...including a map. 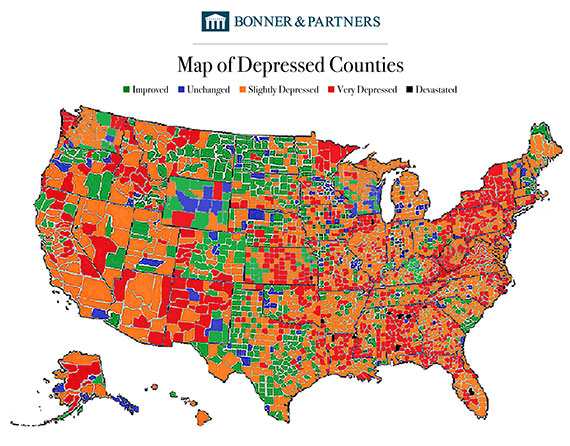 According to the Bureau of Economic Analysis (BEA), wages have risen 36% since the 2008 financial crisis. The jobless rate has been cut in half. And GDP has grown 20%.

The economy is cranking out more jobs...more money...and more stuff.

"The US is a diverse nation of 325 million people. It's composed of 50 states. Those states are composed of 3,141 counties. And those counties are very different from one another...as are the people who live in them.

"But the BEA ignores this in its analysis. Instead, it rounds up economic statistics from all over the nation. Then it picks out the averages...and puts makeup on them. It smooths out their wrinkles and evens out their complexions.

"Can you spot the problem?

"GDP measures include government outlays...but those outlays exceed tax receipts by a wide margin every year.

"So, a portion of government outlays are financed by money created from nothing...and that is picked up as 'growth' in GDP.

"The people receiving that money then spend it on something...which is picked up in the 'private consumption' part of GDP.

"By the way, government transfer payments have exploded by 45% since the 2008 financial crisis. And GDP metrics have captured every single penny of that as 'growth'."

At Bonner & Partners, we pass no judgment.

Old...young...fat...lazy – we don't care how attractive your county is. We just want to know what it looks like before the feds doll it up.

"The map reveals that people in 2,278 counties have gotten poorer over the past 10 years. As best we can tell, that means 73% of US counties are in a depression.

"Let's look at each of our metrics. Over the past 10 years:

"What is most surprising to us about this study is that even in counties where the Deep State and its crony industries are in full flower, most people are withering."

Could that be true? Could nearly three-quarters of US counties really be in depression?